Libya: An Eyewitness To The Fighting in Misrata

"We are working in a so-called 'safe zone,' which is actually not safe because many parts of the city are in range of the shelling," says MSF's Emergency Coordinator in Misrata. 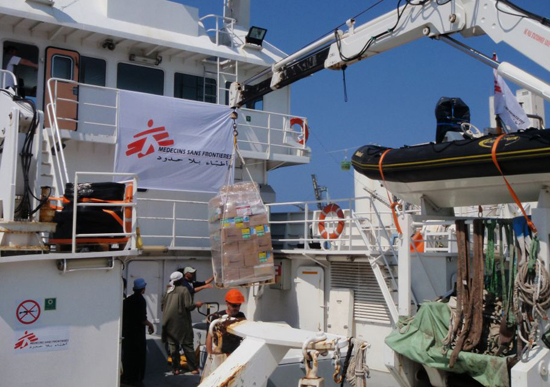 A boat with medical supplies is being offloaded in the port of Misrata in late April.

Over the past two weeks, MSF has been present in the besieged city of Misrata, which has become one of the principal battlegrounds between Libyan state forces and insurgent rebels. MSF’s Emergency Coordinator in Misrata, Alan Lefebvre, talks about the situation on the ground.

What is MSF doing in Misrata at the moment?

Currently, there are 20 MSF staff on the ground working together with Libyan medical staff. A team of surgeons, anesthetists and paramedics address surgical needs in two structures. We also work in a maternity hospital. So far we only have 30 beds for gynecological, obstetric, pediatric and neonatal cases. We are working hard to double the capacity as this maternity structure is the only one in the city. Together with the Libyan staff, we assist around 15 deliveries a day, including caesarian sections. The other structures where women previously could come to deliver have been destroyed or are closed. Another significant activity is our mental health support to Libyan medical staff in the structures where we work. We are also training some Libyan psychologists to provide assistance to the community.

What wounds do you see as a result of the conflict?

A few weeks ago there were wounds as a result of the heavy fighting occurring in the city center, with snipers shooting randomly at people. One week ago there was some heavy shelling on the port. Tragically, it fell down on immigrants waiting for evacuations, and we received quite a lot of dead people. One man lost his brother, his sister and two very young kids. His wife was severely injured by the shrapnel from the rockets. Our surgeon had to amputate her.

This morning I saw some patients with bullet wounds in the legs. If there is indiscriminate shelling over the city again, we will receive mostly dead bodies and people with shrapnel wounds or internal wounds.

What mental health needs are there?

Most Libyan medical staff have been working round the clock since the uprising and are really physically and mentally tired. There are also very young children, just two or three years old, who are worried about dying the next day. They are facing things that a child is not supposed to face.

Are medical structures in Misrata able to cope with the pressure?

The Libyan doctors here have done an amazing job. Capacity is improving although there’s still lots of work to do. The medical structures available for emergencies are not adapted to receive mass casualties.

Are there enough medical supplies coming in?

We are working on getting a better picture of the overall stock of drugs available in the city. MSF has brought in over 25 tons of equipment and drugs and there is more to come. For us it’s a logistic struggle. If tomorrow the port is not open to receive humanitarian cargo then the balance of stocks will be affected.

What is the security situation in the city?

It’s changing from day to day. We are working in a so-called “safe zone,” which is actually not safe because many parts of the city are in range of the shelling. It’s a strange experience to hear all the heavy bombing all the time. Once in a while, there is indiscriminate shelling over the city. We need to have very tight security rules. Over the last few days the bombing has reduced a little. This morning I could hear the sounds of birds, which was not the case before. The fighting has moved further away, although the city is still not a safe place to be.

Neither myself nor any of my colleagues here have seen such remarkable resilience and coping capacity. There’s a strong solidarity among the population. Mechanisms and structures have been put in place by the people themselves. People have to ration the food, so there is a system put in place to avoid inflation of food prices. The community developed a water trucking system to bring water to areas where there is no tap water. But their daily life is far from being normal. They all wish for the end of the conflict, and to get back to their normal lives.