An update on MSF's activities in Libya, where the conflict continues to create severe health care needs. 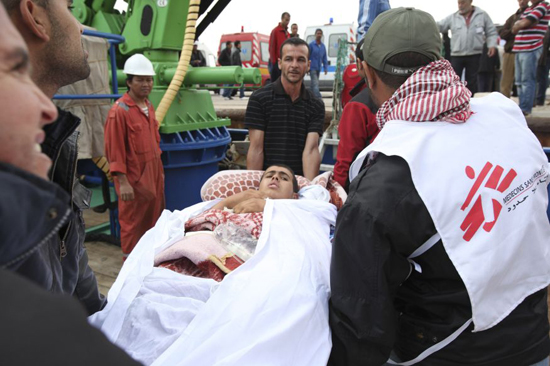 The general situation in Libya remains extremely tense and uncertain, and the situation in a number of locations is particularly volatile, creating ever-greater health care needs.

In Misrata, the country’s third-largest city, conditions seemed to improve slightly after the rebels claimed to have captured the city’s airport on May 11. But this past weekend, the city was targeted by heavy shelling that killed at least 10 people and injured around 20 others. Hospitals continue to work at full capacity, staffed by Libyan medical teams that are addressing the urgent needs related to the violence, but a significant percentage of patients with chronic illnesses and pregnant women is not receiving the necessary care.

In the eastern city of Benghazi, shortages of medical supplies are preventing some hospitals from carrying out lifesaving activities. To meet the high demand for health care both throughout and outside the country, particularly across the border with Tunisia, Doctors Without Borders/Médecins Sans Frontières (MSF) is setting up new projects and stepping up its efforts in its current programs.

Responding To Large Influxes of Wounded in Zintan

On April 30, an MSF team arrived in the western city of Zintan, which is situated southwest of Tripoli, and began supporting the emergency unit, helping with the triage of patients and providing training to hospital staff. In the weeks prior, scores of war-wounded were admitted to the hospital in Zintan following clashes between pro-Gaddafi troops and insurgents, and the pace showed no signs of slowing. On May 1, another 30 wounded people were admitted to the hospital, for instance. And on May 7, a day marked by fighting 25 kilometers (15 miles) east of Zintan, 50 more were admitted, nearly half of them with severe injuries, and 13 of whom were operated on in the following days. On May 11, after 25 injured people were admitted to the hospital following clashes in Riyayena, approximately 25 kilometers (15 miles) away, eight severely wounded patients were transferred to hospitals across the border in Tunisia.

Due to security issues, and in order to free up beds in preparation for further clashes, most patients were referred to hospitals in Tunisia for post-operative care.

The MSF team is currently reorganizing the intensive care unit to deal with large influxes of wounded people. An MSF surgeon is on his way to Zintan to reinforce the hospital’s surgical team. MSF has also donated medicines, a ventilator, and an oxygen concentrator.

In the port city of Misrata, the main medical needs are still for surgery, primary healthcare, gynecological and obstetric care for pregnant women, and post-operative care for wounded patients.

In the Al Abbad Medical Trauma Center, northeast of the city, the Libyan medical team lacked personnel experienced in dealing with war casualties. It has requested training in triage for the wounded and in sterilization and general hygiene techniques. A MSF surgical team—two surgeons, two anesthetists, three nurses, a doctor, and a logistician—has been working in the hospital for the past 10 days, performing an average of five major surgeries each day. On May 10, eight injured people arrived in the hospital and were immediately operated on. Four were newly wounded; the others suffered from older wounds that needed urgent attention.

In the Ras Thuba clinic, near the besieged city’s port, MSF medical staff are helping to provide for patients who need emergency obstetrical surgery or pediatric and neonatal care, while also helping to deliver babies. The flow of patients through the outpatient department is improving, and MSF plans to increase the clinic’s capacity to around 60 beds and to open a second operating theater.

In Kasr Ahmed Hospital, in the eastern part of the city, an MSF team is working to rehabilitate the operating theater and plans to increase the hospital’s capacity from 12 to 50 beds. This hospital aims to accommodate all types of medical emergencies and should receive its first patients in the coming days.

In Benghazi, medical supplies are urgently needed to care for chronic patients and those suffering from tuberculosis and HIV/AIDS. Since the conflict started, the flow of medical supplies from Tripoli has been interrupted, hindering the ability of some hospitals to carry out lifesaving activities. MSF is helping to manage the two central pharmacies in Benghazi, which serve the hospitals in the area and direct some medical supplies to Misrata as well. In addition, MSF staff are helping with waste management and placing orders for essential medicines.

Also in the Benghazi area, MSF is supporting the Libyan Medical Committee's plan to implement sexual and gender-based violence programs in several clinics. MSF plans to eventually scale up these activities throughout Libya in collaboration with local partners and specialists. Training has already begun, and a MSF psychologist has been requested on the ground to help improve local capacity to care for victims of sexual violence.

An MSF team carried out assessments in the city of Ajdabiyah, 20 kilometers (12 miles) from Benghazi, and in the surrounding camps for internally displaced people. The team also visited Sultan, a coastal city near Ajdabiyah, where MSF plans to start antenatal consultations and to set up maternity and mental healthcare programs. The team will also conduct medical activities in the camp of Al Bayda, where some 900 families have taken refuge.

In Misrata, an MSF psychologist is focusing on providing psychological care for local medical staff, men and women who’ve been working continuously under extremely difficult conditions. The psychologist is working in the Ras Thuba clinic, in Kasr Ahmed Hospital, and in the Al Abbad Medical Trauma Center. Several local psychologists are also being trained to carry out mental health activities in each location. MSF plans to send an additional psychologist to focus on delivering care to patients.

Beginning in March, MSF teams have provided psychological support in the camps at Ben Garden, at the Tunisia-Libya border, to people fleeing the conflict and awaiting repatriation or resettlement. While some are in transit in Tunisia before being repatriated to their home country, a growing number cannot be repatriated due to their country’s political situation. To date, the MSF team of psychologists has given more than 4,000 mental health consultations to people who have witnessed or experienced violence before or during the conflict and now face a deeply uncertain future.

Since the beginning of April, thousands of Libyan families have crossed the southern end of Tunisia-Libya border as well. In Dehiba, the MSF team has been supporting the stabilization unit in the health center. Forty-one war-wounded from both sides were stabilized in the unit between April 28 and May 1, after sustaining injuries during fighting between insurgents and pro-Gaddafi forces at the border .

On May 4, an MSF teams in Tataouine started a mobile clinic to provide psychological support to refugees in accommodation centers, in clinics, and in the homes of host families. Since the conflict began, ever greater numbers of Libyan refugees have sought sanctuary in Tataouine; to date, an estimated 40,000 Libyans have arrived, nearly doubling the city’s resident population and putting a great deal of pressure on the health infrastructure. Most of the Libyans come from the Libyan cities of Nalut, Zintan, and Yafran. In the coming days, the MSF team will start medical consultations and will support the hospital with emergencies, surgery, treatment of chronic diseases, and primary healthcare.

Meanwhile, the population of a refugee camp in Remada, a city of around 5,000 people located between Tataouine and Dehiba, has swelled to more than 1,000 people. MSF is assessing the medical needs and will most likely assist the refugees and the host community with primary and secondary healthcare, as well as mental health support.