"It was very much a teaching mission—it was the first time, I did this sort of teaching. In any other mission, you do the job on your own, but in Misrata, I was able to disseminate my knowledge." 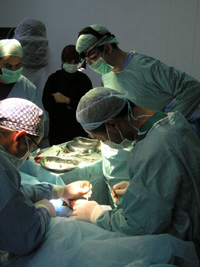 In the rebel-controlled city of Misrata, in Libya, Doctors Without Borders/Médecins Sans Frontières (MSF) is running a surgery program in two facilities—Abbad Hospital and Kasr Ahmed Hospital. Between March and May 2011, the city was a battleground between forces loyal to ruler Muammar Gaddafi and anti-Gaddafi rebels. MSF surgeon David Nott was there and he described his experience.

What was specific about your mission in Misrata?

It was very much a teaching mission—it was the first time I did this sort of teaching. In any other mission, you do the job on your own, but in Misrata, I was able to disseminate my knowledge.

Libyan surgeons and doctors in Misrata were all very skilled in their own specialty, however they had no proper trauma training.

When watching in the operating theater or the triage areas of Abbad Hospital, I felt that although the staff was doing quite good work, significant improvements could be made regarding, for example, the initial management of the airway breathing and circulation and stopping a catastrophic hemorrhage. They did not have enough experience or knowledge to deal with those kinds of problems. And I decided to teach the correct operative way of managing trauma surgery because normal day-to-day surgery is different from trauma surgery.

In London, I teach trauma surgery at the Royal College of Surgeons and I did the same course in Misrata—in English, as they were all speaking English.

Mike, another MSF surgeon, used the information and the videos to give the same lectures in Kasr Ahmed Hospital where MSF is also working. Every day from 2:30 pm to 4 pm, I would give a lecture to around 40 people—surgeons, anaesthetists, medical students, emergency doctors, and triage doctors.

Were you were doing surgery as well?

I did the training all the time I stayed in Misrata, for three weeks. And I did surgery as well in Abbad Hospital, in the mornings, late afternoons, and in evenings. It was trauma surgery—but not that much because most wounded were referred to Al Hikma Hospital, the Misrata trauma center—and mainly post-conflict surgery. We were doing a lot of flap plastic surgery (incorporating skin flaps) and skin grafts. We treated fighters as well as civilians with fragmentation wounds or gunshot wounds. There is one thing I noticed—all patients were treated the same way, regardless of the side there were fighting for.