The revolutionary struggle to bring lifesaving treatment to South Africa

In 1994, as South Africa celebrated its hard-won freedom from nearly half a century of apartheid, the country found itself gripped by a new crisis. A lethal and incurable virus was sweeping across South Africa like wildfire.

By the year 2000, an estimated 4.2 million South Africans were infected with the human immunodeficiency virus (HIV)—the virus that, left untreated, causes AIDS. Nearly a thousand people were dying from the disease every day.

In that same year, a confluence of unprecedented developments, including the newly fledged Access Campaign, would kick off an international movement to make lifesaving drugs accessible to people living with HIV/AIDS. A coalition of doctors, patients, and activists in South Africa and around the world worked together to transform public perception and treatment of the virus—and in how Doctors Without Borders/Médecins Sans Frontières (MSF) responded to the public health crisis it posed. 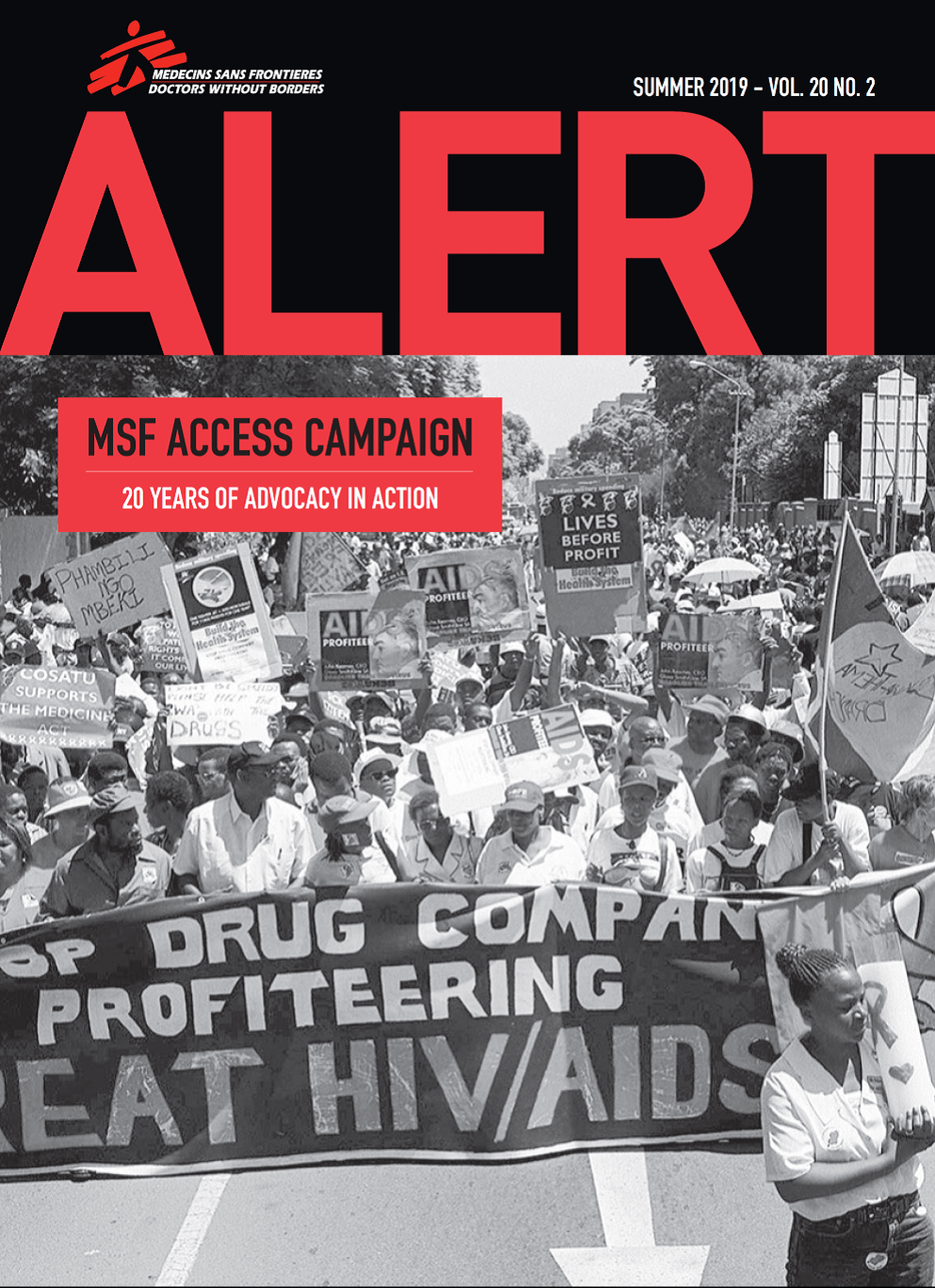 “The only reason we are dying is because we are poor”

Drugs to fight HIV existed in 2000 but were priced far out of reach for the vast majority of South Africans. Branded antiretrovirals (ARVs)—medications that people infected with the virus must take for the rest of their lives—cost upwards of $10,000 per year. The pharmaceutical companies manufacturing these essential medicines refused to lower prices or allow generic competition. “The only reason we are dying is because we are poor,” said Zackie Achmat, a South African activist and founder of the Treatment Action Campaign (TAC).

Treatment was also prohibitively complicated. Regimens required cocktails of expensive drugs that had to be administered by highly trained clinicians. Many public health authorities believed that, even if the sky-high prices of medications fell, the level of expertise and resources required to administer them properly would make it impossible to implement treatment projects in the countries that needed them most, like South Africa. Treating HIV appeared so difficult, in fact, that MSF was at first hesitant to tackle the growing health crisis.

Given these factors, most HIV/AIDS organizations had no choice but to focus almost completely on prevention rather than treatment. “It’s relatively difficult for an international medical organization to work only in prevention on this sort of disease, because you have to understand a lot of social and cultural aspects,” said Dr. Bernard Pécoul, a former executive director of MSF in Paris who would go on to be a co-founder and first director of the Access Campaign. “So we felt that we were not the best organization to do it.”

However, a growing movement within MSF disagreed. Though the organization was ill-equipped to work on HIV prevention, launching projects to treat the virus slowly began to seem more feasible. Promising scientific evidence from clinics in Thailand showed that the proper administration of a drug called AZT, or zidovudine, during pregnancy could cut the chances of transmission of HIV from an infected pregnant mother to her fetus by 50 percent. This treatment protocol came to be known as prevention of mother-to-child transmission, or PMTCT. Some within MSF also believed that AZT could be safely administered in South Africa, perhaps even outside a hospital setting.

However, South Africa’s health minister had blocked the use of AZT for pregnant mothers in the public health system. The South African government, under the country’s second post-apartheid president Thabo Mbeki, had instituted a de facto policy of AIDS denialism. Government officials, skeptical after a lifetime of political violence and inequality, believed the virus was a political ploy—or worse. “All sorts of things came out,” said MSF doctor Eric Goemaere, who would eventually open MSF’s first HIV treatment program in South Africa. “That [ARVs] were toxic, that the drugs were killing people, problems with the tests . . . there was a lot of denial about ARVs.”

“People were dying in the waiting room”

Despite the massive challenges, as the crisis in South Africa wore on it became clear that MSF had no choice but to act. Although the central government was unwilling to implement ARV drugs, MSF was eventually able to secure local approval for a public ARV program in Khayelitsha, one of Cape Town’s largest—and poorest—townships, where rates of HIV infection were steeply on the rise. When the project opened its doors in 2001, the scale of the needs immediately became clear.

“The majority of people [coming to our clinic] could not walk anymore,” remembers Dr. Goemaere. “They were brought literally in wheelbarrows or carried on the backs of their relatives. People were dying in the waiting room. While we were consulting behind the door, regularly we could hear people screaming, and this was a sign [that there had been] another death. Honestly, there was no single day without a death in the waiting room.”

The situation was so dire—and the drugs still so prohibitively expensive—that it would have been impossible for MSF to fill the needs in Khayelitsha, much less the city of Cape Town or South Africa as a whole. At first, the MSF team was only able to put 180 people on treatment with branded ARVs, forcing clinic staff to make wrenching choices of who would receive care—and who would die. Meanwhile, as the death toll rose, public pressure was growing in South Africa for the creation of a national HIV treatment plan.

The astronomical prices of ARV drugs were a major problem for the team in Khayelitsha, and for people living with HIV/AIDS around the world. New international patent agreements were a major reason why. Patents allow manufacturers to charge whatever they want for lifesaving medicines and block the sale of affordable generic versions of these drugs.

In 1997, the South African government led by President Nelson Mandela had passed an act that allowed the minister of health, under certain circumstances, to cancel patent rights to drugs or import generic versions in order to make low-cost medicines available to those who need them. Soon afterward, the Pharmaceutical Manufacturers’ Association (PMA)—a group representing 39 pharmaceutical corporations, including Bristol-Myers Squibb, GlaxoSmithKline, and Merck—sued the South African government. The PMA claimed that this act contradicted the country’s constitution and a new international agreement on intellectual property rights. This challenge began a protracted legal battle that would unite MSF and activist groups like TAC in a fight to bring cheaper generic drugs to patients in South Africa—and around the world.

The case dragged on for years, but a turning point came in 2001 when MSF launched a global advocacy campaign called “Drop the Case.” In a matter of weeks, MSF’s online petition collected 250,000 signatures from people in 130 countries, including many celebrities and public figures. MSF and TAC activists attended a PMA press conference the day before legal arguments in the case were set to resume. Dr. Eric Goemaere was in attendance with a printout of the petition signatures, thick as a phone book. “We are speaking on behalf of 250,000 people across the world,” he said. “And they are telling you: we don’t understand your position.”

The speech was picked up by the media and reported around the world. It had an immediate effect. In a court in the South African city of Pretoria on April 19, 2001, the PMA formally dropped the case. “The court was filled with people . . . and they started to sing,” remembers former Access Campaign policy advocacy director Ellen ‘t Hoen. “Every hair on my body was standing on end. It was in the air that they were going to drop the case; that we had won. And when [it happened], the whole thing just broke out in one big dancing party.” South Africa now had the right to import generic drugs and break patents to improve access to medicines. Although the fight to bring these lifesaving drugs to the people who needed them would continue, a major hurdle had been overcome.

In 2002, the MSF team presented results from the Khayelitsha project at the Barcelona AIDS Conference. The findings were explosive: Two years after the program’s launch, 91 percent of patients were still adhering to their treatment and had an undetectable viral load, allowing HIV-positive people to live longer, healthier lives and preventing transmission of the virus. Later that year, the Joint United Nations Program on HIV/AIDS and the World Health Organization published the “Khayelitsha model” as part of their best-practices series. The project now served as the bedrock on which resource-poor HIV/AIDS treatment programs could be built worldwide.

In 2003, the South African government announced the universal rollout of ARVs. That December, former president Mandela visited a new MSF clinic in Lusikisiki. “The HIV-positive people we see here today are alive, they are healthy, and they are happy. What we see is proof that there is life after HIV/AIDS.”

In the years since, the Access Campaign and activist groups around the world have continued to fight for affordable access to treatment for HIV/AIDS. Thanks in large part to these efforts, ARVs, which in 2000 cost $10,000 per patient per year or more, can now be purchased for around $1 a day. At the end of 2018, more than 22 million people living with HIV/AIDS received these lifesaving drugs.

While this progress has been heartening, the hard-earned gains of the past two decades risk being lost without continued support. Today, access and innovation are urgently needed in key areas including child-friendly medicines, second- and third-line drugs for people whose initial treatment fails, and drugs for AIDS-related opportunistic infections. Sustained attention and funding are required so that all people living with HIV/AIDS have access to lifesaving treatment and care.

Parts of this article were adapted from the 2014 MSF book No Valley Without Shadows, the 2014 film Fire in the Blood, and the 2019 Access Campaign magazine 20 Years of Advocacy in Action.