Ensuring pregnant women have timely access to emergency obstetric care has reduced maternal deaths by as much as 74 percent in parts of Burundi and Sierra Leone. 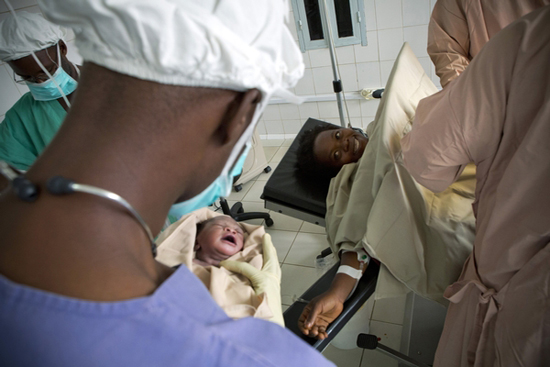 Mateso Emilienne, 25, was picked up by MSF ambulance the previous day from Gatumba Health Center. Her baby was delivered via Caesarean section.

Medical data gathered in 2011 from MSF projects in Bo, Sierra Leone, and Kabezi, Burundi indicate that the introduction of ambulance referral systems, together with the provision of emergency obstetric services, can significantly reduce the risk of women dying from pregnancy-related complications.

“You do not need state-of-the-art facilities or equipment to save many women’s lives,” said Vincent Lambert, MSF’s medical advisor for Burundi. “MSF’s experience can serve as an encouraging example for donors, governments and other NGOs considering investing in the improvement of access to emergency obstetric care in countries with high maternal mortality rates.”

The comprehensive emergency obstetric services at MSF hospitals in Bo and Kabezi is provided 24 hours a day, seven days a week. All services are free of charge. The total annual operating costs of the programs are equivalent to just under two dollars per person in Bo and $4.15 per person in Kabezi.

Sierra Leone and Burundi both suffer from extremely high maternal mortality rates due to lack of access to quality antenatal and obstetric care, which are linked to shortages of qualified health staff, a lack of medical facilities, and health systems that have been shattered by years of civil war.

“Giving birth in Sierra Leone is often a life-threatening endeavor for many women,” said Betty Raney, an obstetrician with MSF in Sierra Leone. “In my 25 years as an obstetrician, I have never seen such a level of severity among the patients. Had they not had any access to care, many of them would die.”

Some 287,000 women worldwide die each year giving birth, leaving behind children ten times more likely to die prematurely as a result of their mothers’ deaths.