Malawi: "How can you go back to rationing access to care?" 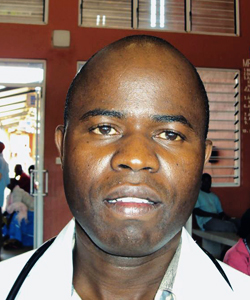 Olesi Ellemani Pasulani, MSF clinical officer in Malawi, remembers what is was like treating people living with HIV/AIDS before the scale-up of ART in Malawi. "You could just take care of them, and wait for the day that they would die," he said.

The increase in availability of antiretroviral drugs (ARVs) used to treat HIV in recent years, backed by solid funding commitments, has given millions of people in poor countries a new lease on life. This is the case for tens of thousands of people living with HIV/AIDS in Malawi’s southern Thyolo district. Here, Olesi Ellemani Pasulani, clinical officer for Doctors Without Borders/Médecins Sans Frontières (MSF) at the Thyolo District Hospital, shares his perspective on how improved access to care has changed the lives of people living with HIV/AIDS and the healthcare workers who treat them.

"I can remember what the situation was like before we had ARVs in 2003," Pasulani said. "We could only offer people voluntary HIV testing and counseling. We could only promote the use of condoms and distribute them and we could treat other sexually transmitted diseases. We had a lot of patients in homes that were on palliative care due to terminally ill conditions. There were very few people that came forward to be tested for HIV, because there was not much we could do without ARVs. It was like a death sentence to test HIV positive."

Health care workers were left disheartened because they could only deliver home-based care, simply being able to offer treatment for chronic illnesses and providing end of life care to patients.

"You could just take care of them, and wait for the day that they would die," he said. "It was really hard, because you could see how people were broken down by the knowledge of being HIV positive. That era was really hard for healthcare workers and it demotivated you completely."

Thanks to a model of care developed by MSF and the Malawian Ministry of Health, the ARV scale-up in the Thyolo district in 2003 turned around thousands of lives and entire communities by providing universal access to treatment across the district. By the end of 2008 the number of people on ARVs had increased even further and now in 2009 universal access is maintained.

"Now people living with HIV/AIDS have courage—there is light at the end of the tunnel for them. There is hope among people in the villages."

"Now people living with HIV/AIDS have courage—there is light at the end of the tunnel for them," Pasulani said. "There is hope among people in the villages. You can see the difference that you as healthcare worker make in someone’s life thanks to ARVs. We would see a patient that was bed-ridden earlier, and they would start ARVs. When you meet them again six or seven months later in the market or on the street, they are completely changed. They have joy."

The threat of the early retreat of HIV/AIDS funding and the dire impact it would have on patients’ lives across the most affected areas of sub-Saharan Africa is something that worries Pasulani and his colleagues.

"It is important to continue with ARVs and increase it even more. How can you go back to rationing access to care? It is a right to life. If treatment is threatened it will mean we go back to a situation worse than before ARVs. It will also damage the relationship of trust that communities have built with healthcare workers over the years."