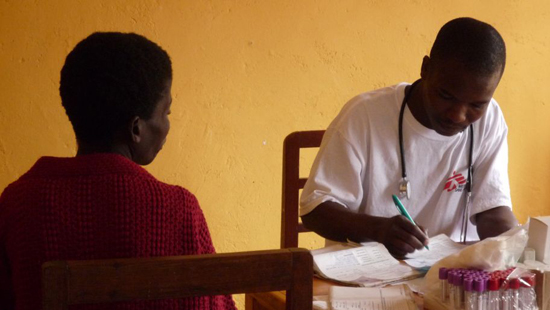 With approximately 930,000 infected persons, Malawi has one of the world's highest HIV/AIDS rates. But although 211 national facilities were offering free antiretroviral medicine (ARVs) as of late 2008, only 50 percent of patients had access to the drugs and another 290,000 were still awaiting treatment. To combat this alarming health emergency, Doctors Without Borders/Médecins Sans Frontières (MSF) is applying a new decentralized HIV approach that brings treatment closer to the patients.

In the Chiradzulu district of southern Malawi, nearly one in seven persons is HIV-positive. In addition, Chiradzulu—and the rest of the country—suffers from an acute shortage of trained healthcare personnel. Currently, around 40 percent of healthcare positions are unoccupied and very difficult to fill. In an effort to solve this predicament, MSF in 2005 set a goal of decentralizing HIV treatment and is now seeing the benefits of the approach in Chiradzulu. In collaboration with district health authorities, MSF has simplifed treatment protocols and delegated responsibility for treatment from the district hospitals to the local healthcare centers. "In concrete terms, MSF medical staff works closely with health ministry staff in the healthcare centers on a daily basis," MSF head of mission in Malawi Mickaël Le Paih explains. "That means we are sharing the work."

The goals of decentralized treatment are to ensure access to care and ARVs for the maximum number of the district's HIV patients and to provide services closer to home. "Patients no longer have to walk miles to reach the hospital," says Séverine Doumeziel, the MSF project coordinator. "They also receive better medical follow-up because in the event of complication, or if they don't feel well, it's simpler and faster for them to come back to the center."

Nouma*, a HIV-positive patient, entered MSF's new program in 2008. Because he had developed a resistance to the first drug regimen, he recently began taking a second drug regimen. MSF’s decentralized approach has helped facilitate his treatment. "It was complicated to go to the district hospital," he says. "It is hard for me to walk and I don't have a car. And it's difficult to pay for transportation because it's far away. It takes me 30 minutes to reach the health center from my house.”

Nouma is not the only one benefitting from not having to go to the hospital. In May 2009, 740 of the 13,000 MSF patients receiving ARV treatment in Malawi enrolled in a new six-month program at their health center. As part of the program, they come for a follow-up biannually but can go directly to the local health center—without waiting for an appointment date—in the event of problems or complications. In order to provide this service, healthcare tasks have been assigned to lower-level employees.

In Chiradzulu, several medical responsibilities have been delegated to nurses. They have been trained to initiate ARV treatment and monitor stable patients and can now provide care usually offered by trained physicians. Only the most sensitive or complicated cases are referred to clinical officers—health workers who have received four-year medical training—who are in short supply.

Educating patients about their illness

Non-specialized, trained staff also handles screening and provide psychosocial and nutritional support. A patient taking ARVs must understand and specifically agree to continue the treatment for the rest of his or her life. This requires close and regular support, which is why MSF set up a counseling team to complement medical monitoring.

The counselors are there to help patients with the daily problems that an HIV infection poses and to ensure that medications are taken regularly. Specific approaches have been set up for children, who represent 10 percent of patients. Communication tools intended for children ages seven to 14 have been designed to provide them appropriate information about their illness. "We know that it's important to get to the issue of HIV status quickly with children," explains a Malawian psychosocial counselor. "And that means starting at the age of six. Most patients who learned about their illness after the age of 14 or 15 have a hard time taking their medicine properly. You have to talk with the children a lot and get involved with them."

Future of the program

All these evolutions have been conducted in close cooperation with the Malawian ministry of health. MSF expects to transfer increasing levels of responsibility to the agency "The decentralization goal was established in 2005," Mickaël Le Paih explains. "It's finally been achieved. Access to high-quality HIV care is available on a widespread basis throughout the Chiradzulu district. We're tempted to think about the longer-term now, which would, of course, involve the possibility of handing over MSF's activities over the course of several years."

But even if these innovative methods of delegating treatment responsibility provide relief to health staff and allow new patients to enter treatment quickly, they are not implemented on a national scale and do have limits. "Even if the entire population could be screened tomorrow, the ministry of health would still face the human resources issue," Séverine Doumeziel notes. "And MSF cannot hire lots of people, for both financial and logistical reasons. The ministry of health must also continue to expand its ability to treat and monitor HIV patients."

As part of MSF's program, more than 4,377 patients received ARV treatment in Chiradzulu district in 2008. Since the project was initiated in 2001, MSF has monitored and treated more than 12,016 patients. Currently, MSF is in the process of improving programs to prevent mother-to-child HIV transmission, which have been offered in health centers since March 2008.

*Full names of patients are withheld to protect their identity.