Mauritania: As Food Grows Scarce, Thousands of Malian Refugees Gather in the Desert

More than 28,000 Malian refugees fleeing conflict in northern Mali have been forced to seek refuge in Mauritania. 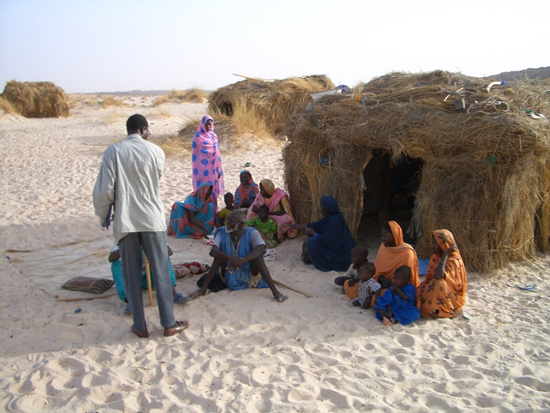 An MSF staff member conducting a nutritional survey that led to the opening of the feeding center in Néma, near the border with Mali.

More than 28,000 Malian refugees have been forced to seek refuge in the border region of Mauritania due to the conflict between the Malian army and Tuareg rebels that broke out in northern Mali last month. Some refugees travelled days without food to reach makeshift camps in Fassala and Mbéré in the south east of Mauritania.

Today, an initial shipment of more than 28 tons (26 metric tons) of medical and logistical supplies will be flown from Belgium to Néma, about 124 miles (200 kilometers) from Mbéré camp. Doctors Without Borders/Médecins Sans Frontières (MSF) teams are starting medical activities. “We are in the middle of the desert in an area where water is a scarce commodity," says Marie-Christine Férir, MSF’s emergency coordinator in Mali. "Even more alarming, these people are isolated here: the nearest hospital is six hours away by road."

Food insecurity threatens both refugees and local people. The arrival of refugees in distress puts even greater pressure on Mauritanian families who have already been impoverished by recent bad harvests. “We know that amongst the refugees are pregnant women and children who are suffering from moderate to severe malnutrition,” says Férir. It is crucial that the youngest children, who are particularly vulnerable, are able to access free medical aid, as a malnourished child is more vulnerable to illnesses like measles, diarrhea, and respiratory infections. Sick children are also at a higher risk of becoming malnourished.

Considering that the closest hospital is more than 124 miles (200 kilometers) away, one of MSF’s priorities will be to provide prompt emergency care and stabilize serious cases before referring patients to the hospital in Néma. The new MSF clinic in Mbére camp will allow medical teams to provide a range of key services including consultations, nutritional screenings, primary health care, prenatal care, and vaccinations against infectious diseases like measles if necessary.

MSF has been responding to the medical needs of refugees in Niger and Burkina Faso since the beginning of February 2012. The organization is also working in the north of Mali, where it offers primary health care to people displaced by fighting there.