Southern Sudan has paid one of the highest prices among countries affected by meningitis this year. Several teams from Doctors Without Borders/Médecins sans Frontières (MSF) are caring for those affected by the deadly epidemic and vaccinating the population at risk throughout a number of states in the region. To make matters worse, cholera is quickly progressing in a number of areas. 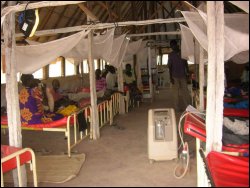 Approximately 7,000 cases of meningitis and 430 deaths, according to World Health Organization: among all the countries that comprise the meningitis belt, southern Sudan is the most heavily hit country since the beginning of the epidemic. The outbreak began early in the season–as early as January- and has progressively spread through eight of the ten states that make up southern Sudan. In this region where population figures are largely reliable, planning a vaccination campaign is extremely complex.

The International Cooperation Group (ICG, an organization for the response to epidemics, of which MSF is a member) validated the delivery of 1.1 million doses of the vaccine, and vaccination of the target population (everybody aged between 2 and 30) is currently taking place in several states. To date, nearly 400,000 people have been vaccinated by MSF and an additional 380,000 will be vaccinated in the coming weeks. Our teams move according to where the most cases are reported, they "follow" the epidemic based on evaluations carried out by MSF to determine which areas should be considered a priority.

To vaccinate 10,000 people, the following is needed: one refrigerator, 5 large isothermal containers, 250 ice packs and 5 kilograms of cotton. In southern Sudan, the logistics of a vaccination campaign–transporting teams and equipment to vaccination sites, maintaining the cold chain–is a challenge, especially in rural areas. "We are in country just out from 20 years of war and the conditions to respond to a major outbreak are difficult," says Dr. Mego Terzian, head of the emergency team in North Bahr al Ghazal.

"Some areas are unreachable because they have not been de-mined. Some of the roads are newly built, the rest are unusable. In additions, the presence of many weapons in the region is a risk factor, with incidents at vaccination sites that can quickly flare up. All this is complicated, but we deal with it. The main obstacles we face are the absence of reliable data concerning the population and the lack of trained people in health centers." 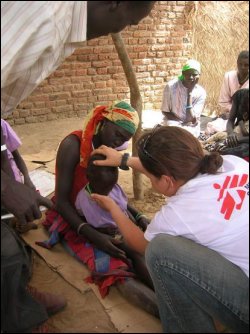 In addition to the vaccinations, other priorities when facing an epidemic are to register new cases, to train the staff to identify and treat meningitis. "Patients must be treated at the earliest possible stage of the disease, so we work in close collaboration with the primary health care unit," noted Dr. Sarah Hustache of the MSF emergency team in Bahr al Ghazal. "We are providing treatment kits containing oily chloramphenicol and additional materials needed for the meningitis injection and to treat symptoms (fever, convulsions) and other diseases. The severe cases are transferred and hospitalized in an MSF structure. The decrease in the number of meningitis fatalities, as a result of the treatment being made available quickly to patients, shows that our strategy is effective," says Dr. Hustache. In the areas of southern Sudan where MSF contributes to the case management of meningitis patients, more than 1,642 cases have been reported and 111 deaths occurred. It takes less than ten days after the start of a vaccination campaign to witness a drop in the number of new cases.

In addition to the meningitis epidemic, cholera cases have also been on the rise, even though the dry season has not ended yet. In Juba, capital of southern Sudan, a cholera treatment center opened on the March 2, and has already admitted 1,242 patients. In Jonglei state, the treatment unit set up in Pibor two weeks ago has already treated a total of 79 patients. "We receive up to 80 cases a day," says Carmen de la Piscina, our emergency coordinator in Juba. "And we fear a significant rise in numbers with the onset of the rainy season."