Migrants In Morocco Stuck At A Dead End

Migrants passing through Morocco in hopes of reaching Europe often find more misery, illness, and injury along the way. 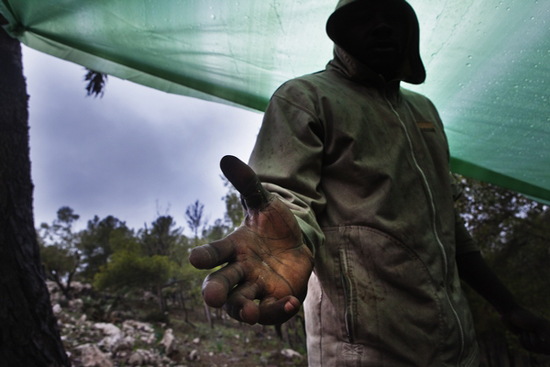 Mussa, a migrant from Mali who desperately wants to get to Europe, returns to his camp in the northwest of Morocco after his second failed attempt to cross into Spanish territory.

They arrive breathless and defeated, drenched by sweat intermingled with the rain and covered with mud. They have run up Gourougou Mountain and some now limp. It was another unsuccessful attempt to get over the fence separating them from Melilla, an autonomous Spanish city on the northwestern coast of Morocco. Now it's back to the small clutch of trees which serves as "home" for the time being.

In the nieghboring Moroccan city of Nador, in the pretty pine-covered hills and lowland forest of Gourougou, some several hundred African migrants are living in makeshift camps, awaiting the opportunity to enter Europe.

Stuck in the Alawite country, unable to move or return to their own countries, and unable to work in Morocco, they suffer constant harassment, even violence, from the Moroccan security forces trying to prevent them from jumping the fence into Spanish territory and making their way across the Straight of Gibraltar to Europe. Spain’s Guardia Civil is also involved in the harassment and expels migrants to the border with Algeria.

“We'd been waiting all night in the rain, next to the fence, waiting for the chance,” said one migrant named Mussa, shivering in the November cold. “But it wasn't until the morning that it came. It wasn't possible, no one got over. There were more than a hundred of us. The soldiers got me on the head with a stone. About 20 got their feet caught in the barbed wire on the fence. We had to leave them there, they were getting hit.”

Mussa is 25 years old, from Mali, and came to Morocco a year ago. This was his second attempt. The others are mostly young men from West African countries who have left their homes because they have no financial resources, no job opportunites, and corruption is rife where they come from. They also bear responsibility for their families—siblings and mothers who they have left behind in pitiful conditions. “I haven't been able to send anything to my mother or my three younger siblings since I got here,” Mussa laments. He will continue trying to get over the fence and into Europe, even though the water scares him. Last time he tried to cross over, he went out into the strait in a dinghy—"the type you blow up,” he said—that he and five friends scraped together the money to buy. Two of them drowned.

Some migrants who have been there longer have made more attempts and have more scars. They even see the role of the security forces as normal. “Everyone has his job and the Moroccan soldiers' job is to stop us getting through,” said one man who has tried 10 times. “The same goes for the Guardia Civil. They push you and when they catch you—and I'm not accusing anyone, it is the will of God. Well, we all know what happens; they're soldiers. When the attempt is over, people have broken arms or legs. If you manage to get over the fence, then it's the Guardia Civil's turn.”

“The living conditions here drive us to the fence,” Mussa said. “We sleep on the ground and eat fruit and whatever we can find in the rubbish and from begging.” In the hills they find strategic locations to settle, grouped by country of origin and common languages. In the winter they make bonfires to boil water to mix with flour, make a bit of tea, and get some heat. They sleep wrapped in plastic to protect them from the damp.

Abdou’s camp is a long way from the road, a steep 20 minutes climb up to where a slope forms a kind of cave. It isn't easy for the police to get there, “but they do come,” he said. Abdou arrived in Gourougou two months ago, a year after leaving Ghana. He's 21 and would like to get to a European country where he could finish his studies to become a teacher. “It's my only chance, I can't go back to my country.”

His companions go down to Nador market to beg. He doesn't go much. “I don't like how it makes me feel inside,” Abdou said, “and sometimes they insult you, so we hunt for food in the rubbish. When I don't beg, instead I take whatever we find up the mountain, what we buy, some rice, if we can get some dirhams together.” Abdou is very afraid of the police, “and this is why, because I am so scared of them, that I have not been caught.”

Migrants lament that they cannot work in Morocco and that if anyone ever hires them, they get cheated. They are paid 20 dirhams a day [about $2.38], “or they don't pay us and then threaten to report us to the police,” Mussa said. They are the targets of criminals and bandits—they can't go to the police and report crimes committed against them. “Thieves come with knives and steal. They tell us to give them food, money, your mobile. If not, you get hurt,” Abdou said.

Few want to give their real name or show their face to the camera. There is fear. They complain that the police harassment and raids on the hill are becoming more routine, the arrests and expulsions, too.

Abdou said that five of his companions were arrested yesterday in the market and expelled to the border. They are expelled in groups of 20 or 30, he explained. Once there, they are forced to go to Algeria, to leave Morocco. However, the Algerian soldiers will prevent them from entering by shooting into the air. They return to Morocco. From the border, if you know the way, it takes four or more hours to reach Oujda by foot. This is often the first city migrants reach when they arrive in Morocco. From there, it takes about two days to get back to Nador. Once the cycle is complete, it starts all over again, and they keep trying.

MSF has worked in Morocco since 1997. Since 2003, the organization has worked with sub-Saharan migrants, a vulnerable population with specific medical and humanitarian needs related to their living conditions and irregular administrative situation. MSF currently has two projects in Morocco. In Rabat, the country’s capital city, MSF teams provide medical and psychological care to migrant victims of sexual violence. In Oriental Region, which borders Algeria and Melilla, MSF works to ensure migrants have access to medical care in public health facilities in the city of Oujda. MSF teams also provide psychological care, distribute basic shelter materials, hygiene and cooking kits and carry out water and sanitation activities.