Hundreds of migrants, including women and children, have been deported to a no-man’s land at the border between Morocco and Algeria, abandoned there during the night without food and water. 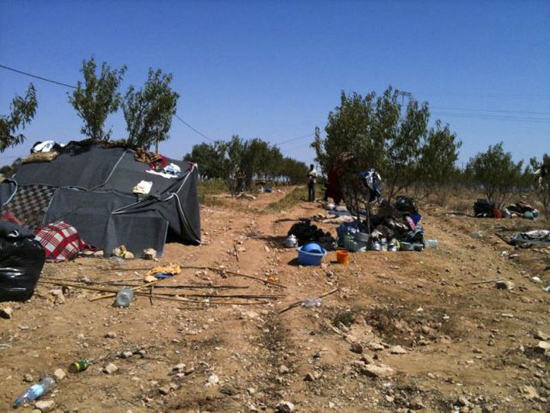 A temporary shelter set up by migrants recently expelled from Morocco.

Morocco, September 30, 2010 – The international medical humanitarian organization Doctors Without Borders/Médecins Sans Frontières (MSF) expressed deep concern today about the deterioration of the medical and humanitarian situation of sub-Saharan migrants in Morocco following the recent raids and mass expulsions carried out by Moroccan police forces. Hundreds of migrants, including women and children, have been deported to a no-man’s land at the border between Morocco and Algeria, abandoned there during the night without food and water.

Police operations took place between August 19 and September 10 in cities throughout Morocco, including Oujda, Al-Hoceima, Nador, Tangiers, Rabat, Casablanca, and Fez. Police forces used bulldozers in many of the raids—and used helicopters in Nador—and destroyed migrants’ tents and houses.

An estimated 600 to 700 migrants were arrested during the raids and taken to the border between Morocco and Algeria, where they were left to fend for themselves without food or water. Among them were pregnant women, children, and people suffering from medical problems or injuries directly or indirectly related to the police raids. They faced the choice of returning to Oujda on foot or trying to cross to the Algerian side of the border. Abandoned in the middle of the night, they were at risk of being attacked and robbed by bandits and smugglers who operate in the area. Those who managed to reach the city of Oujda are completely destitute, without money, shelter, or personal belongings.

“Our team has witnessed the direct impact of these mass raids and expulsions on the medical and mental health condition of the migrants,” said Jorge Martin, MSF’s head of mission in Morocco. “We provided medical support to a woman who had given birth to her child just six days before. She was arrested by the police forces and spent five days in a police cell with her newborn child. Then she was taken back to the border. She has managed to come back to Oujda, but is now suffering from acute gastrointestinal syndrome. ”

During the past few weeks, MSF teams have seen an alarming increase in patients with medical problems related to incidents of violence. Of the 186 patients who have received medical care from MSF, 103 had lesions and injuries directly or indirectly linked to the violence during the arrests. The harsh living conditions and the lack of proper shelter have also contributed to the increase in medical problems. Almost half of the migrants who sought medical care from MSF teams had medical symptoms linked to the difficult and unsanitary living conditions. Among the migrants, 18 percent were suffering from skin infections, 10 percent from respiratory infections, and 11 percent from digestive problems.

“This intensification of restrictive measures to control migration in Morocco has a direct impact on the health and dignity of migrants and refugees,” said Martin. “Mass raids and expulsions to the border increase their vulnerability and put them at greater risk. MSF calls on the Moroccan authorities to adhere to their obligations under national and international law when implementing measures to control migration. The authorities must respect the dignity and integrity of migrants and avoid exposing them to a situation of greater vulnerability and insecurity. As stipulated in Moroccan law, pregnant women, children, and other vulnerable groups of migrants must not be expelled to the border.”

MSF has been working in Morocco since 2000, carrying out health care projects in Tangiers, Casablanca, Rabat, and Oujda, providing sub-Saharan migrants with medical and humanitarian assistance and advocating for better access to healthcare and respect for migrants’ human dignity. Currently, MSF is running a project in Oujda providing medical and psychological care to migrants and refugees.