Other Medical Projects in Somalia Continue, But MSF Assistance in Somali Capital Reduced by Half

Following the tragic killings of two staff members in Mogadishu on December 29, 2011, MSF has been forced to end all activities in the Hodan district of the capital. 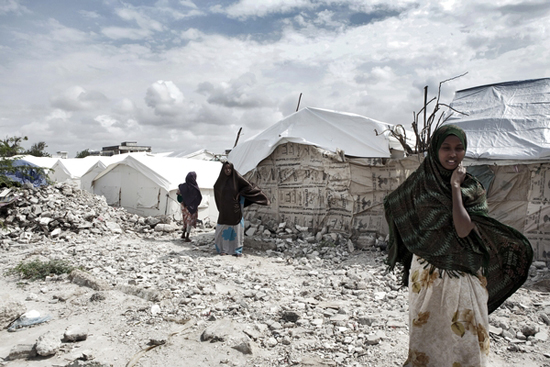 Houses lie in ruin in Mogadishu's Hodan district, where MSF has been forced to end activities.

January 19, 2012 - Following the tragic killings of Philippe Havet and Dr. Karel Keiluhu, staff members of the international medical humanitarian organization Doctors Without Borders/Médecins Sans Frontières (MSF) in Mogadishu, Somalia, on December 29, 2011, MSF has been forced to end all activities in the Hodan district of the capital, including the closure of two separate 120-bed medical facilities for the treatment of malnutrition, measles, and cholera.

The closure of activities in the Hodan district reduces by half the assistance MSF is providing in Mogadishu. The facilities were MSF’s largest in the city. For now, MSF projects will continue to provide medical care in other districts of the city, as well as in 10 other locations in Somalia.
However, the continuation of MSF’s assistance to Somalis in need of medical care is dependent upon the respect for personnel, patients, and medical facilities. Where these conditions prevail, MSF remains committed to continue its activities in Somalia.
“It is hard to close health services in a location where the presence of our medical teams is genuinely life-saving,” said Christopher Stokes, MSF general director.  “But the brutal assassination of our colleagues in Hodan makes it impossible for us to continue working in this district of Mogadishu.”
In Hodan, MSF had been assisting 200,000 Somalis who fled to the capital in recent months. Since August 2011, MSF treated 11,787 malnourished children, 1,232 people with acute watery diarrhea, and 861 people suffering from measles. MSF teams also vaccinated 67,228 children against measles.
MSF also strongly reiterates its call to all parties, and to the leadership and people of Somalia, to facilitate the safe release of Montserrat Serra and Blanca Thiebaut, MSF aid workers abducted in the Dadaab refugee camp in Kenya on October 13, 2011 while providing emergency assistance to the Somali population.
MSF has been working in Somalia continuously since 1991 and currently operates 13 projects in the country, including medical activities related to the ongoing emergency, vaccination campaigns, and nutritional interventions. MSF also assists Somali refugees in camps in Dadaab, Kenya, and Dolo Ado, Ethiopia.