MSF Continues to Run Projects in Darfur and North Sudan 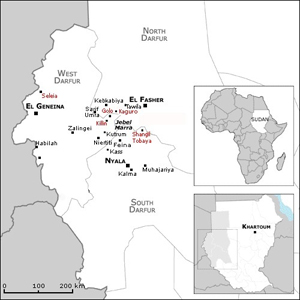 Following the expulsion of two of the five Doctors Without Borders/Médecins Sans Frontières (MSF) sections working in Darfur, Sudan, in March 2009, MSF teams continue to provide aid in the region. In five areas of North and West Darfur, a total of 23 international staff and 567 national staff are running MSF projects; some 48 Ministry of Health staff are also providing assistance.

In North Darfur MSF teams are working in Shangil Tobaya and Kaguro. In Shangil Tobaya, 65km (40 miles) south of El Fasher, MSF provides primary and secondary health care, including reproductive health services, treatment for victims of violence and a therapeutic feeding program. In Kaguro, which is in the rebel-held territory of Jebel Si, MSF runs a dispensary and five health posts in the surrounding area. Staff in the dispensary provide outpatient and inpatient care, antenatal care, nutritional support and immunization. In the health posts, outpatient and antenatal care are offered.

Several security incidents in Kebkabyia and the abduction of five MSF staff from Serif Umra in March 2009 meant that projects in these two locations in North Darfur were forced to close at the beginning of April. Activities in Tawila, also in North Darfur, have been suspended since December 2008, following a serious security incident.

In West Darfur, in the town of Seleia, MSF runs a number of fixed health posts and mobile clinics which provide health care to thousands of people in the area. In Golo, which is located in the Jebel Marra, MSF teams are working in the town’s hospital, providing primary and secondary health care with both inpatient and outpatient care, obstetric care and nutritional care. In nearby Killin, which is in a rebel-controlled area, MSF provides primary health care, including a small emergency room, in the town’s clinic, in addition to an outpatient nutritional program.

Due to the expulsions, MSF no longer has any activities in South Darfur.

Also in North Sudan, MSF runs a project in Port Sudan, in Red Sea State (RSS), providing reproductive healthcare with a particular focus on pregnant women who have been circumcised. In RSS, an estimated 97.6 percent of women are circumcised, causing serious medical complications for many throughout their lives. During delivery, women have to be cut open, or defibulated, to enable the birth of the child. After a birth it is common practice to re-stitch, or re-infibulate, the woman. However, in Port Sudan the MSF project in Tagodom Hospital operates a zero-tolerance approach to circumcision, so does not re-infibulate any pregnant women following delivery.

A key part of MSF’s work in Port Sudan is basic health education and awareness-raising about the medical risks of circumcision through trained home visitors in the community, in addition to carrying out counseling and education at Tagodom Hospital.

MSF has been working in Sudan since 1979 and has carried out vital assistance in many different regions of North Sudan. Since 2003, MSF has worked in Darfur treating more than 3 million outpatients, 60,000 inpatients, gave 225,000 antenatal care consultations, delivered 10,000 babies, performed 12,000 surgeries and provided mental health care for 20,000 people.