Sharing mRNA vaccine technology and know-how with additional manufacturers in low- and middle-income countries, including in Africa, could help increase global production and supply

NEW YORK/GENEVA, AUGUST 23, 2021—Following today’s full approval of the Pfizer-BioNTech mRNA COVID-19 vaccine by the US Food and Drug Administration, the international medical humanitarian organization Doctors Without Borders/Médecins Sans Frontières (MSF) called on US-based Pfizer and German-based BioNTech to immediately share the vaccine technology and knowledge with manufacturers on the African continent that could help boost the global supply. MSF is also calling on the US government to demand these companies follow through. As COVID-19 vaccines remain scarce and people continue to die from COVID-19 at alarming rates across Africa, additional manufacturers stand ready to help boost the global supply, but cannot do so because Pfizer-BioNTech will not share the information and expertise needed for them to make more doses. 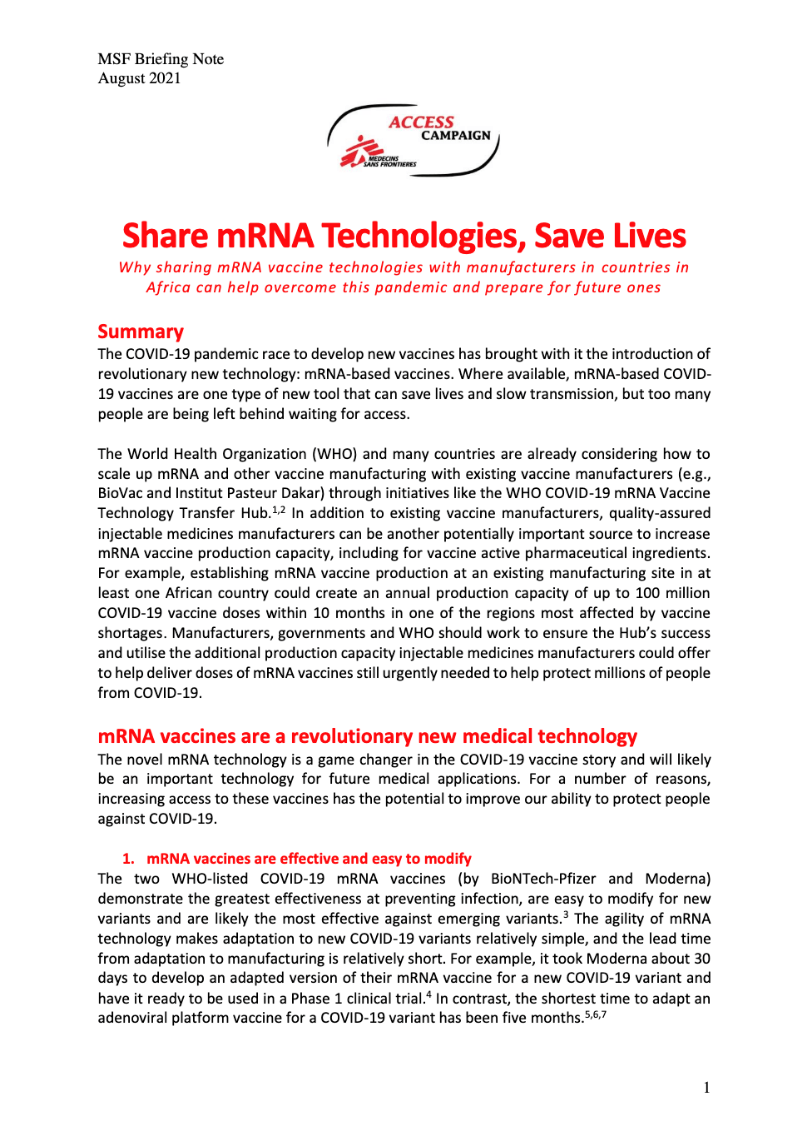 Pfizer-BioNTech received significant public funding to accelerate the development of these vaccines and is one of only two corporations producing mRNA COVID-19 vaccines, along with US-based Moderna. Pfizer-BioNtech should share this information through the World Health Organization’s (WHO) mRNA vaccine technology transfer hub hosted in South Africa. With only 1.7 percent of Africa’s population fully vaccinated against COVID-19, increasing and diversifying production and supply of mRNA vaccines through additional manufacturers, beginning with those based in countries on the African continent, offers an opportunity to urgently and sustainably address vaccine inequity.

“Supporting sustainable, independent vaccine manufacturing capacity in an African country would only require technology transfer from Pfizer-BioNTech and Moderna, but it would be a gamechanger for equitable access to vaccines for people in low- and middle-income countries,” said Dr. Carrie Teicher, director of programs at MSF-USA. “The US government must immediately urge Pfizer-BioNTech and Moderna to share COVID-19 mRNA vaccine technology and know-how. It really is a no-brainer—sharing mRNA technologies will increase the global production and supply of COVID-19 vaccines, saving lives in this pandemic and in the future.”

In an analysis by Imperial College of London commissioned by MSF, the estimated total cost needed for starting up mRNA vaccine manufacturing in an existing manufacturing site and producing 100 million doses is approximately $127 million for Pfizer-BioNTech’s vaccine and $270 million for Moderna’s vaccine. Considering the estimated $2.5 billion of public money that has gone into the development of mRNA vaccines—and the forecasted 2021 sales revenues of $26 billion and $19 billion for Pfizer-BioNTech and Moderna, respectively—these companies have a public obligation to facilitate increasing vaccine production and supply wherever possible.

“Setting up mRNA vaccine manufacturing capacity in Africa is absolutely possible,” said Lara Dovifat, campaign manager for MSF’s Access Campaign. “Our analysis shows that at least seven manufacturers in African countries currently meet the prerequisites to produce mRNA vaccines, if all necessary technology and training were openly shared. In fact, since July 2020, we’ve observed Pfizer-BioNTech and Moderna facilitate mRNA vaccine production with manufacturers in Switzerland, Spain, and Germany—all within eight months—so it is clearly feasible for other manufacturers to swiftly produce mRNA vaccines. The only reason these vaccines aren’t being produced more widely is because Pfizer-BioNTech and Moderna are refusing to share mRNA vaccine technology and information with manufacturers, including those in Egypt, Morocco, South Africa, and Tunisia that could have the capacity to produce up to 100 million doses annually within a 10-month timeframe.”

Currently, only 1 percent of Pfizer-BioNTech vaccine doses have been delivered to low-income countries (0.1 percent), and low- and middle-income countries (0.9 percent), based on MSF calculations using August 22 data from AirFinity. Given that countries in Africa historically import 99 percent of the vaccines they administer, such vaccine dependence is clearly not sustainable for a continent of 1.2 billion people.

“As we’re seeing in the places we work, being almost entirely dependent on erratic vaccine imports and donations has so far proven woefully insufficient for vaccine access on the African continent,” said Dr. Khosi Mavuso, medical representative for MSF-South Africa. “As new variants emerge and people continue to die from COVID-19 at alarming rates across Africa, the vaccine shortages we’re seeing are incredibly concerning. This suffering could be alleviated if pharmaceutical companies shared the mRNA technology and know-how needed to produce more COVID-19 vaccines now, through the WHO technology transfer hub so that local vaccine production can begin as soon as possible. It is a failure for global public health that governments and mRNA vaccine producers are not doing everything they can to scale up production of COVID-19 vaccines when there are potential manufacturers on the African continent.”

These mRNA vaccines are a revolutionary and lifesaving new medical tool that are an advantageous choice for use and manufacturing in low- and middle-income countries as they are relatively simpler, faster, and cheaper to produce than traditional vaccines. It is relatively easy to scale up production of mRNA vaccines, and they are highly adaptable to new variants of the virus that causes COVID-19. In addition, mRNA technology can be adapted to target other pathogens, meaning the same platform can be “switched” to produce different vaccines or even therapeutics for other diseases of concern, including those that may cause future pandemics.

In addition to demanding that Pfizer-BioNTech and Moderna share this technology, MSF urges all governments to support the WHO COVID-19 mRNA Vaccine technology transfer hub with financial and political support. Additionally, MSF calls on the US government and others with sufficient COVID-19 vaccine doses to immediately redistribute excess doses to the COVAX Facility. MSF also urges all countries to support the "TRIPS waiver" proposal at the World Trade Organization to waive intellectual-property monopolies on all COVID-19 vaccines, tests, treatments, and other health tools during the pandemic, and to use all legal and policy tools to facilitate uninterrupted production and diversity in the supply of COVID-19 medical tools.