MSF at IAC 2012: Measuring Viral Load in Resource-Poor Settings Not a Luxury

As HIV treatment is scaled up in developing countries, the lack of access to viral load monitoring, a method of measuring the level of HIV in a patient that is routinely used in wealthy countries, must be addressed. 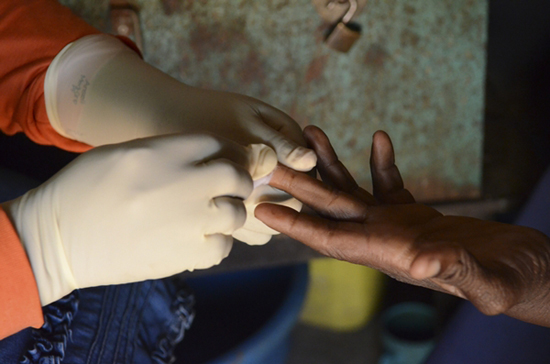 An MSF patient is tested for HIV in Swaziland. 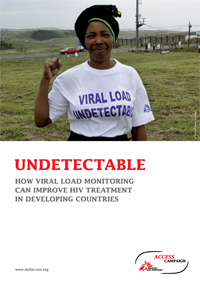 WASHINGTON, DC, JULY 23, 2012—As HIV treatment is scaled up in developing countries, the lack of access to viral load monitoring, a method of measuring the level of HIV in a patient that is routinely used in wealthy countries, must be addressed, the international medical humanitarian organization Doctors Without Borders/Médecins Sans Frontières (MSF) said today.

Viral load testing measures the amount of HIV in a person’s blood; when there are less than 50 copies of HIV’s genetic material per milliliter of blood, a person’s viral load is said to be "undetectable." This means the virus has been suppressed to a level where a person can live a healthy life and is also much less likely to transmit the virus. Increased access to viral load monitoring can help people stay on antiretroviral combination therapy as long as possible, and help stave off resistance, according to a new report released today by MSF.

In developed countries viral load testing is offered routinely, but because of high cost and tests that are not well adapted to resource-limited settings, it is not yet available to most people living in developing countries.

“It’s time to end the double standard in HIV care between developed and developing countries,” said Dr. Eric Goemaere of MSF-South Africa. “In addition to ensuring people get the medicines they need to stay alive, there is increased urgency to make sure people have access to monitoring. When a person knows their viral load is ‘undetectable,’ it provides motivation to stick to their treatment for the long haul.”

Viral load testing is critical for two reasons. First, it identifies people having difficulty taking their medicines regularly, and can be used to trigger additional adherence counselling. Second, it identifies people who have developed drug resistance and need to be switched to another treatment regimen. Viral load testing also helps avoid unnecessarily switching patients to more expensive drugs and reducing future treatment options.

In the report Undetectable: How Viral Load Monitoring Can Improve HIV Treatment in Developing Countries, MSF outlines a number of existing and new viral load technologies that are expected to come to market over the next three years, ranging from point-of-care tests to those that can be used at district laboratory level. The report outlines ideas for overcoming complexity and cost barriers.

MSF has recently field tested one point-of-care viral load device and has also received a grant from the funder UNITAID to field test several current and new viral load technologies over the next three years, as a way to overcome the critical shortfall in viral load capacity in Africa. The new approaches will be tried in seven African countries where MSF runs HIV treatment programs.

The goal of the project is to determine which new strategies and products are best suited to resource-limited settings. There will be projects that pilot new point-of-care tests and projects that look at using existing technologies in new ways.

“We have fought in every single one of our projects to simplify treatment as much as possible in order to reduce the burden on patients and the health system,” said Teri Roberts, diagnostics adviser for MSF’s Access Campaign. “But we came to the conclusion that viral load is an essential tool that extends patients’ lives and helps prevent HIV transmission.”

The tool primarily used for HIV monitoring in developing countries today is a measurement of people’s CD4 white blood cell count, which does not paint an accurate enough picture of how a person is responding to treatment. Viral load testing identifies problems earlier than by measuring CD4 count.

In MSF’s project in Khayelitsha, South Africa, where routine viral load testing is available, people who were identified with "detectable" viral load were given targeted counseling support to improve their adherence to treatment. Three months later at their next check-up, 71 percent of these patients had an undetectable viral load.

“I am proud that my viral load is undetectable, and I tell others about it,” said Fanelwa Gwashu, who receives treatment through MSF in Khayelitsha. “Antiretroviral treatment is life-long, so it’s encouraging to be told that the treatment is working well for me. It helps to know that whatever the difficulties, I am controlling the virus. It helps me plan for tomorrow, and I am confident I will live a normal life in the future.”