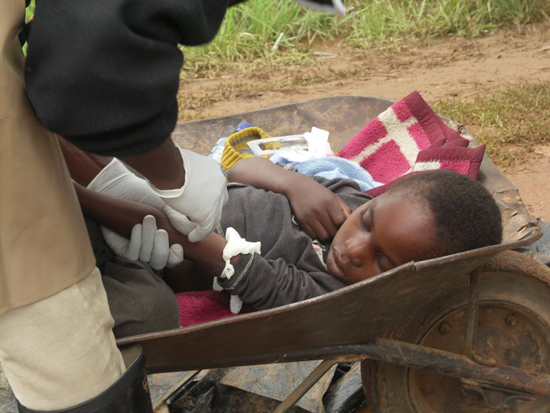 In Kadoma, a child brought in a cart to an MSF cholera treatment center is given an IV by medical staff before he is moved to a bed.

Doctors Without Borders/Médecins Sans Frontières (MSF) nurse Pia Engebrigtsen worked for two months as a nurse in Zimbabwe's Masvingo province during the country's ongoing massive cholera outbreak. This was the Norwegian nurse’s fourth mission with MSF; here she describes the experience.

Cholera can kill within hours

Dealing with cholera is different than other emergencies I have worked on. It was the speed of it that made it so different. When you enter an area with many people sick from cholera or a clinic completely overloaded with cholera patients, you know lives will soon be lost. Cholera can kill within hours as a result of dehydration, so you have to make very quick decisions. Tomorrow might be too late. This was a different way of thinking from my previous emergency experience. At the same time, we had to make wise decisions. Cholera was literally all over the country and we needed to be consistent in the support we gave.

Cholera patients lie completely still on their beds, while the intravenous (IV) drips that rehydrate them are running quickly. You see they are exhausted. You can often tell just by looking at them how dehydrated they are. Their eyes are sunken and the whites of their eyes will still show even though their eyes are closed.

Finding the needs in rural areas 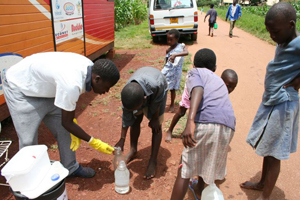 MSF is implementing a program in communities around Harare where they directly chlorinate people's water in their buckets and jerry cans.

We used different strategies to help as many people as possible in the large, mostly rural province where we worked. I was part of an exploratory team that visited rural areas affected by cholera to decide whether or not MSF needed to intervene. Sometimes we also went to areas where we didn't know if cholera was present, just to see the situation for ourselves. We had to travel long distances and sometimes slept in the villages. The roads in the countryside were really bad; we sometimes had to struggle even with a four-wheel drive. I would imagine how hard it was for people who only have a donkey cart to transport the sick to a health center.

The people in the villages were very calm when we arrived. The children were different, of course. They laughed and pointed, and giggled when they touched us.

If there was no health facility in the area, we would sometimes set up our own cholera treatment unit (CTU), which was often the case in the old farm lands that covered huge areas in the bush. We carried the essential equipment in the car – set up supplies such as plastic sheeting, buckets of various sizes, chlorine, cleaning equipment and protective clothing, such as aprons and boots, as well as medical supplies including ringer lactate, oral rehydration salts, IV sets, antibiotics, gloves and first aid kits.

If there was a health center, we made improvements so they could properly isolate the cholera patients. We trained staff to identify cholera patients from those with another diarrheal disease and to evaluate who needed urgent attention.

We found many patients in a very severe state; many were unconscious without palpable pulses. Then, after a few hours with intravenous fluid therapy, they were able to sit up and talk. Most patients stay in the center for 2 or 3 days, then go home completely cured.

Even so, it was very sad to be there. There were many people we were not able to save as cholera was all over the provinces, many little villages were affected. Sometimes we came too late – the cholera had already burnt its way through the village by the time we got there. This was the biggest problem – the distances are huge and we were not able to reach everyone in time.

The days were long; we normally worked every day until after midnight. Every day was unpredictable so you had to get as much work out of the way as possible each day.

We felt very much welcomed in the communities. The people have been suffering for a long time without receiving much help from the international community, so I think any type of support would have been welcomed. They were very open and realized the need for help to fight the disease. We drove to isolated villages where we were always met by very hospitable villagers who willingly shared information and their concerns.

The nurses who worked in the local health centers were usually very grateful for our support. Most of them lacked equipment and had not been supplied with essential drugs for a long time, so our trainings and donations made a big difference in their daily work. 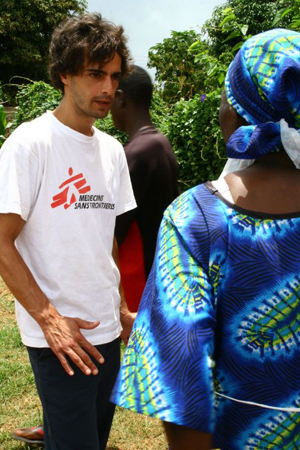 MSF trains teams of community outreach workers around Harare to spread the word about prevention and treatment of cholera.

The importance of educating people about how to prevent cholera became increasingly clear to me when I realized that people were dying just because they lacked basic information. They did not know how cholera was transmitted so they could not take preventative measures.

I used every opportunity to talk to community leaders about cholera and make them understand how they could help stop the spread of the disease in their own villages. If we had time, we would also ask the leader to gather the whole community so we could explain what cholera was, how to prevent it and what to do when a person became ill. We also asked them to agree on who would provide a donkey cart ambulance for the village, since most people did not have any means of transportation.

In the beginning, many people would die in the community without having gone to the health center; many others would arrive at the center in a very severe state. After health education, patients would come much earlier. People rarely died in the community. The funerals of people who died from cholera were monitored by health staff to help ensure that cholera was not spread there – cholera funerals are a main source of infection in the countryside as people touch the body and then eat together.

The experience has definitely changed me. Before I came to Zimbabwe, I had not imagined how cruel cholera was. For me it was just an infectious diarrheal disease. Now I know what damage it brings with it. All the suffering made a strong impression on me. So many more lives would have been spared if more international aid had been present.

I think what made the strongest impression on me was meeting parents who had lost their whole families. They could be completely silent, but their eyes spoke of their pain and their hopelessness. I think many of them felt guilty for not having brought their sick family members earlier to the health facilities. But the barriers are so many: lack of money, lack of transportation means, lack of knowledge, huge distances. It is so easy to be the judge afterwards.

I will remember all the people, they were so friendly and good humoured and wise. I cannot imagine how it is possible to keep your spirit up under such hopeless conditions, but somehow they managed. They were strong minded and were not willing to give up.