Caught between northern and southern Sudan: violence and fighting in Abyei

Following the fighting in Abyei in mid-May, almost 60,000 people have fled the area, which previously had 130,000 inhabitants. Many fled to Turalei and Agok.

An MSF team of 11 people, including a surgeon and an anaesthetist, have been sent to Turalei and Agok to support the displaced people, bringing surgical tools and first-aid materials to meet the needs of 1,705 families, and water purification materials for some 10,000 people. In these two towns, MSF has taken 140 wounded people into its care. In the Turalei Hospital, which has only 40 beds, MSF teams have assembled emergency medical structures under tents to provide primary health care services to the displaced population.

Malnutrition is the most acute problem for the displaced population from Abyei and surroundings. Before the fighting began, malnutrition rates were above 50 percent, based on screenings carried out in the hospital in Abyei, with more than 700 children under five years of age admitted to the nutrition program. MSF teams in Turalei and Agok provide nutritional treatment to children suffering from severe acute malnutrition in ambulatory programs, and operate an inpatient nutritional center for complicated cases. In one day at the end of June, 40 children were admitted to the nutritional program in Agok after assessments were carried out by an MSF mobile clinic in the nearby area of Malual Aleu. With 2,000 children screened there and in the MSF clinic in Agok, the global acute malnutrition rate was recorded at 25 percent. MSF teams are currently treating more than 400 children suffering from malnutrition.

An assessment is being conducted in the most isolated areas to access the populations likely to be most affected. The spread-out populations and the logistical constraints due to the rainy season make it difficult to access all the populations in need. Another MSF team is assessing the areas north of Abyei, and has already provided essential non-food items to 670 displaced families in Muglad, and has provided basic kits to support existing health structures. 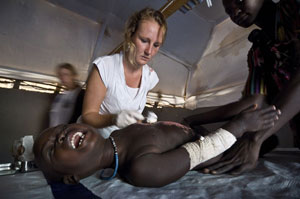 Earlier in the year, clashes between armed forces and tribal militias along the disputed border of northern and southern Sudan, coupled with ongoing political tensions, had led to the arrivals of a few thousand displaced people in the area of Aweil, the capital of Bahr el Ghazal State. MSF has distributed 3,000 kits containing essential items such as soap, jerry cans, mosquito nets, tarpaulins, and cooking sets to the most vulnerable, covering the needs of more than 15,000 people. These arrivals increased the population further, after the return of tens of thousands of Sudanese former refugees, and within a context of food insecurity.

Lack of food, especially during the ‘hunger gap’ of April to July, is an issue that MSF teams identify in many areas where they work in South Sudan. In Northern Bahr el Ghazal, food insecurity has even worsened this year because of flooding the previous year that destroyed crops, and lowered food availability in markets due to an interruption of commercial traffic with South Sudan when fighting at the border occurred.

Malnutrition in the Aweil area is the first priority and MSF set up several feeding centers at the beginning of 2008. Since February, the nutrition program already has more than 4,000 admissions, with 6,000 planned. The team raised awareness among the UN agencies, and food distributions have been organized. MSF has focused on severely malnourished children, as well as moderately malnourished children with medical complications.

Medical teams also have been addressing a high prevalence of malaria well before the “malaria season”. They expect 23,000 malaria patients during the season, among them 1,000 severe cases. Two treatment units for complicated malaria cases have been set up in Aweil Hospital and Warawar (Aweil east county). Three mobile teams will deal with the simple cases.

When MSF first assessed health care in Bor, Jonglei State, in 2005, it found a critical situation. The population of the town had begun to increase rapidly and was projected to exceed 10,000 people soon. In June 2008, after two years of presence, MSF handed over the hospital in Bor to local health authorities. The hospital is now fully functional, receiving thousands of patients each month. Over the course of 2007, around 55,000 people received health care in the hospital. MSF has guaranteed supplies and funding for Bor Civil Hospital until the end of the year. 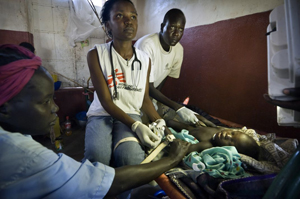 An absence of healthcare staff, structures, roads, transport, other aid agencies, and investment in health care means that in many areas of southern Sudan, MSF is one of the only medical organizations present to meet the substantial needs. MSF teams work in six states providing medical care ranging from primary health care to treatment of diseases of epidemic potential. Health care for women is of particular concern, as the maternal mortality rate in southern Sudan is one of the highest in the world. Since January 2008, MSF assisted almost 4,000 women in ante-natal care programs in the Greater Upper Nile area. In the first half of 2008, staff in MSF’s health centers and hospitals in Jonglei, Upper Nile, and Unity states already have seen more than 72,000 outpatients, admitted almost 2,000 patients, and performed 130 surgeries.

In addition to working in fixed structures, mobile clinics and outreach teams are essential parts of MSF’s work, as they ensure that people living in extremely remote areas without roads or any transport facilities can receive medical care. 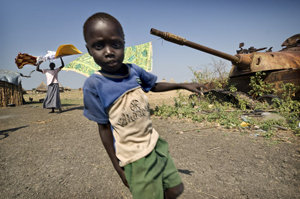 In a country devastated by over 20 years of war, with little or no health infrastructure, where deadly diseases are common, and outbreaks of meningitis and cholera are frequent, the ability of MSF teams to respond quickly and efficiently to emergencies is crucial.

In Juba, an MSF team addressed a recent outbreak of cholera. Two cholera treatment centers were set up in the first half of May. So far, 716 people have been treated and the numbers are decreasing. Other activities include hygiene promotion, health education, public communications, household disinfections, and training of local staff.

MSF has reinforced its emergency response capacity by not only having proactive field teams, but also by setting up a permanent team based in Juba that, together with the Ministry of Health, focuses on outbreak surveillance and rapid assessment and response. By April 2008 this emergency team had intervened in four of the ten states. In Malualkon, Northern Bahr el Ghazal State, they assisted people who had been displaced by heavy fighting. In Kapoeta, Eastern Equatoria State, measles, meningitis and hepatitis E alerts were investigated. In Marial Lou, Warrab State, emergency surgery was provided. In Yei, Central Equatoria State, teams responded to a cholera outbreak.

MSF teams are working closely with the Ministry of Health and a handful of other organizations operating in southern Sudan. Increasing criminality in Juba, heightened tensions from the disarmament initiatives, and road banditry have made it more difficult for field teams to operate safely. The needs in southern Sudan continue to be immense, with MSF teams stretched to ensure the provision of basic and secondary health care and to respond to emergencies.