Now in its seventh year, the conflict in Yemen continues to have a devastating impact on people’s well-being, particularly on their mental health. Despite the needs, many people are unable to access vital mental health care for a range of reasons, including a lack of awareness about the care that’s available and stigma against people with mental health issues.

Mental health care is an important component of the Doctors Without Borders/Médecins Sans Frontières (MSF) response in Yemen. In Hajjah—a city in the northwest of the country—we run a mental health clinic in Al-Gamhouri hospital. Here, MSF mental health manager Antonella Pozzi and several patients who received care at the clinic talk about the challenges they faced in accessing mental health services and how MSF was able to help.

Antonella Pozzi: "At the clinic, we try to normalize mental health issues." 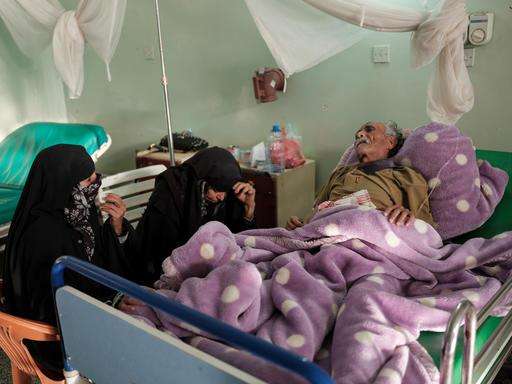 Yemen: The impact of war on people's lives

The range of conditions that we treat is broad: we see people suffering from anxiety and insomnia, and patients presenting with severe psychological disorders such as psychosis, depression, bipolar disorder, and post-traumatic stress disorder (PTSD). Severe symptoms of psychosis can manifest as hallucinations that can cause a great deal of suffering. We often see patients who have attempted suicide, provoked by a variety of circumstances including psychosis and severe depression.

Mental health is very much affected by environmental factors. The more traumatic someone’s circumstances are, the more their mental health will be impacted. Living in a context of war means being exposed to constant stress for a long period of time. Armed conflict in Yemen has not only affected people’s physical health, but it has also reduced their access to health care, education, and food, it restricts their freedom of movement, and it denies them the freedom to express themselves—all of this can contribute to serious mental health issues.

Forty-five percent of the patients we see in the MSF mental health clinic have severe mental health symptoms. This number is astonishingly high—almost eight times higher than what would usually be expected, even in conflict settings, according to the World Health Organization (WHO). There is a lack of mental health services available in Hajjah city and the surrounding areas, so all severe cases in the area are referred to us.

In March, June, and July of this year, more than 50 percent of new patients presented with severe mental health disorders. More than 9,000 people in the Hajjah area have been identified as in need of mental health care—but the actual number is likely much higher, as mental health needs are often underestimated. People often travel more than 100 kilometers [about 60 miles] to access MSF’s services, which indicates the high needs across the country.

Because of the war, people in Hajjah have endured high levels of violence for a long time. This means that often people only seek mental health care if their issues are very obvious and disruptive to them or their loved ones. Many people with poor mental health symptoms often seek spiritual treatment first. This can delay them from receiving the vital mental health care they need, and sometimes exacerbates their symptoms.

It is essential to try to help people understand common mental health conditions and how to recognize them. Often families of people with psychosis don’t know how to restrain them during aggressive episodes, so they resort to physically restraining them, as they can be a danger to themselves or others. This is one of the reasons why it is so important to raise awareness about the mental health services available—so families know where to turn to for help.

Hamdan Saleh had worked happily in the administration department of the Yemeni security forces for years. But at the start of the civil war in Yemen, he became one of the hundreds of government employees whose salaries were stopped. His pay was the only source of income for his family. Their sudden financial difficulties, alongside the worsening conflict, led Saleh to develop mental health issues. He began to develop psychosis and suffer from feelings of paranoia.

"I started believing that everyone was conspiring against me, trying to harm me," said Saleh. “I had hallucinations too—hearing and seeing mystical creatures telling me to do things. Telling me to die. One day I poured gasoline on myself to set myself on fire. I changed my mind at the last moment by thinking of my children.”

With no knowledge or understanding of mental health care, Saleh's family turned to spiritual treatment. But his symptoms persisted.

After years of suffering, Saleh finally saught treatment at MSF’s clinic in Hajjah. “I experienced some side effects of the treatment, but I had to take the medicine to make myself better,” he said. “If I had a choice, I would have never taken the medicines, but mental health disorders aren’t a choice."

Saleh is now working as a farmer in his village, growing corn and wheat. He feels better, and his family and social life are back to normal.

Hafsa*: “I still fear something could happen to my children.”

The memories of her hometown, Harad, still haunt Hafsa. One evening in 2016, an airstrike hit her neighborhood. Her children were at the mosque and only Hafsa and her husband were at home. Hafsa recalls how her house trembled and the loud sound as a bomb struck a nearby gas station. Many of the nearby houses collapsed and more than 250 people were either injured or killed.

Hafsa’s husband had a heart condition and the shock of the explosion caused him to have a heart attack. Hafsa took him to hospital as soon as she could, but the doctors told her that he had died a few hours earlier.

Hafsa developed psychosis following this traumatic incident. She began to have flashbacks of the airstrike and could not stop thinking about how it had taken everything from her. She also developed a sense of paranoia, fearing all the time that something terrible could happen again.

“I do not want to have all my children together in one room. If something happens, everyone together would become victims of bombs or airstrikes. I do not like letting my children go out. When they do, I ask them to stay in contact with me regularly. I fear something could happen to them,” she said.

Following the death of her husband and their move to Hajjah, life has not been easy for Hafsa and her family. There is no income for her family, and they are entirely dependent on humanitarian aid. Hafsa's daughter developed psychosis and attempted suicide by setting herself on fire. She was severely burned and needed weeks of treatment for her injuries.

Both Hafsa and her daughter were treated at MSF’s clinic.

Alima*: "Mental health services are not only for 'crazy' people."

Alima was in hospital for a routine sexual and reproductive health care appointment when she overheard some women talking about mental health care. She had always thought of mental health care as something that only “crazy” people needed. Alima was surprised to hear that these two women regularly used these services, yet they did not seem to have obvious issues, so she asked them about it.

After her divorce, Alima’s ex-husband’s family did not let her see her three children. Alima, who was already dealing with anxiety, became depressed. She suffered from sleeping issues and isolated herself. She also attempted to commit suicide.

“One day I saw my son from afar, but I could not go to meet him,” said Alima. “I felt very distressed and cried for hours. That day I decided to consult a psychologist. I went to the Al-Gamhouri Hospital mental health clinic in Hajjah city and spoke with a psychologist for four hours. It was the first time I understood the idea of mental health and how these services can help.”

Alima continued weekly counseling sessions for almost a year at the mental health clinic in Hajjah. She describes the relaxation techniques and role-play exercises as "magical." Alima is now an advocate of mental health services in her social circles.

Alima’s life has positively changed over the last year. She has started a small business making homemade sweets. More importantly, she is socializing with her friends again and has resumed her university education.

“She smiles now—something she had forgotten how to do,” said MSF psychologist Rasmia Ali Mohammed. “We cannot change a person’s circumstances, but we can help them cope better with the situations they face. There are many who require such mental health care, but it is often not available. When available at private clinics, it is [too expensive].” said Mohammed.