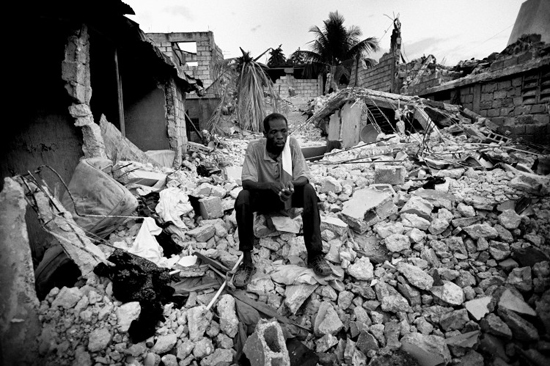 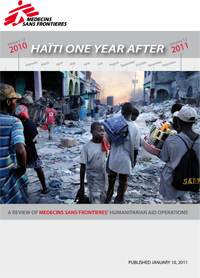 While overall access to basic healthcare has improved since the earthquake, the rapid spread of cholera across the country underscores the limits of the international aid system in responding effectively to new emergencies. International agencies must live up to the commitments made to the Haitian people and to donors by turning promises into more concrete actions, said MSF.

Urgent humanitarian needs must be met while long-term reconstruction plans are pursued. The overall health of the population and the ability to contain the risk of disease outbreaks depend on improving water and sanitation and ensuring that the one million people still living in tents have access to sufficient transitional shelter.

“The massive devastation wrought by the earthquake provoked an extraordinary outpouring of generosity from private individual donors around the world and promises from the international community to ‘build Haiti back better,’” said Stefano Zannini, MSF head of mission in Haiti.

“But the sad reality today is that even as Haitians try to rebuild their lives, many people remain extremely vulnerable, especially as they face a second and largely preventable disaster in a cholera epidemic that so far has claimed at least 3,600 more lives.”

MSF today issued a review of its own emergency response following the earthquake and an assessment of the existing gaps in secondary health care services that it will attempt to address in the year ahead. MSF’s response in Haiti since the earthquake and the cholera epidemic constitutes the largest disaster operation in the organization’s history.

By the end of 2010, MSF estimates that it will have spent all of the 104 million euros ($138 million) donated by private individuals to mobilize its earthquake relief effort and respond to the cholera epidemic. From January 12 to October 31, 2010, MSF medical teams treated more than 358,000 people, performed more than 16,500 surgeries, and delivered more than 15,000 babies. More than 5,700 major operations were carried out over the first three months alone, making MSF one of the largest providers of surgical care.

Since the start of the cholera epidemic, MSF-supported cholera treatment centers have treated more than 91,000 people out of the 171,300 cases reported nationwide through January 1, 2011.

“As the anniversary of the earthquake approaches, it is important to reflect even more on the shortfalls of the past year given the immense needs of the population and the trust bestowed by individuals worldwide to help meet those needs,” said Dr. Unni Karunakara, MSF international president. “With the ongoing generous support of our private donors and commitment of our staff—many of whom continued to work despite the deaths of family members and friends—MSF is dedicated to using our experience in Haiti to sustain and improve upon our programs in the country and to remain prepared for future emergencies.”

MSF’s operational budget projections for Haiti for 2011 are 46 million euros ($60.7 million) to maintain a network of six private hospitals in Port-au-Prince, with a total capacity of up to 1,000 beds, and to maintain support of two Ministry of Health hospitals. Three of the facilities in the capital will be newly constructed in 2011—including the only functioning burn treatment unit in the capital—replacing temporary facilities established in the aftermath of the earthquake.

Outside the capital, in Léogâne, MSF will continue to run a newly constructed 120-bed general hospital. Among MSF’s operational priorities in Haiti are obstetric, emergency, and trauma care.