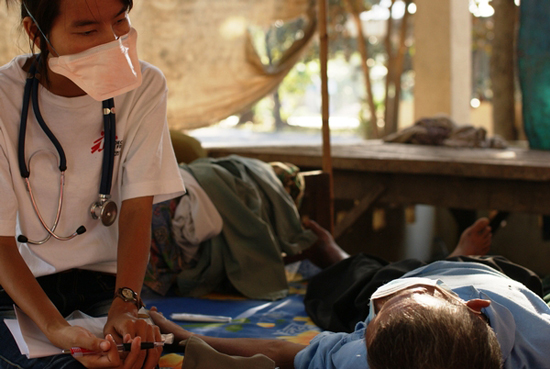 An MSF staff member conducts a home-based visit for a DR-TB patient in Kampong Cham province.

Doctors Without Borders/Médecins Sans Frontières (MSF) is scaling up its tuberculosis (TB) support in the Cambodian province of Kampong Cham while continuing to help shape the nation’s national TB program.

With a prevalence rate among the 22 highest in the world, tuberculosis is one of the most serious public health challenges facing Cambodia.

Tuberculosis bacteria are most commonly spread by the cough of someone with active TB disease. Once a person is infected, TB can take advantage of a weakened immune system to activate, causing symptomatic disease and the risk of further transmission to others. Among underprivileged communities in Cambodia, overcrowding, poor living conditions, altered nutrition, and HIV co-infection can all contribute to the development and spread of TB.

MSF first arrived in Kampong Cham Hospital in 1994 and launched a basic TB program, which later expanded to include HIV care. In 2008, MSF built a new TB ward and upgraded the hospital’s laboratory facilities. In the years since, MSF has significantly expanded the project to include treatment for TB/HIV co-infected, drug-resistant (DR) TB, and pediatric TB patients, in addition to introducing new, innovative practices to try to turn back the tide of TB infections in the province.

Community education, hands-on direct treatment, and follow-up of TB patients in Kampong Cham province are at the core of MSF’s strategy, as well as advocacy at the national level for the expertise and experience that MSF brings to the project site to be replicated throughout Cambodia’s national TB response.

In addition to comanaging Kampong Cham Hospital’s TB department and introducing a new rapid TB diagnostic tool to speed up the testing process, MSF staff work with Ministry of Health doctors to identify potential TB cases in other parts of the hospital, particularly in the pediatric ward, as detecting TB in children can be challenging.

Previously, the TB response in Kampong Cham province was based on passive detection, meaning that patients were tested and treated for the disease only after they felt unwell enough to present themselves at the hospital. MSF has introduced a more active approach, in which counselors educate newly diagnosed TB patients about the disease, find out who they have been in contact with, and then approach and convince at-risk contacts to be tested for the disease, free of charge. In many cases this means close family members—particularly children—are tested, but it often means work colleagues, friends, and extended family should be tested as well.

The introduction and expansion of contact tracing in the follow-up system has also been key to improving TB detection in the target population. “The aim of contact tracing is to go out into the community and try to actively look for TB,” says MSF TB referral doctor Adam Phillip Liu. “In doing so, we aim to hopefully minimize the number of patients who present later with the disease and reduce the number of patients who can potentially spread the disease to others in the community. In that sense it’s a more efficient and economical approach.”

MSF provides support for those identified through contact tracing to travel to the hospital for testing, as well as treatment and follow-up counseling if they are found to be infected.

“Contact tracing is very important because people that have been in close proximity with a TB-infected person are at the highest risk of contracting the disease, much more than the general population,” says head of mission Jean Luc Lambert. “Every year, around 500 new cases of TB are found per 100,000 people nationally in Cambodia, according to the World Health Organization. Trying to screen so many people is just not realistic or sustainable, which is why targeted proactive detection through methods such as contact tracing is so essential.”

On average, around 70 percent of the people identified through contact tracing come to the clinic for consultation.

Forty-five-year-old Srey (not her real name) was diagnosed with DR-TB and joined MSF’s treatment program shortly after her husband died from the disease in 2010. Living about 25 miles (40 kilometers) from the hospital in a remote village with four children to look after, coping with the side effects from the medication has been extremely challenging.

Srey participated in MSF’s peer support and group patient sessions, which are designed to help those on treatment understand and cope with the severe effects of the medication.

“In the beginning I used to have bad side effects like fevers, dizziness, headaches, and abdominal pain—it was very hard,” says Srey. “I wanted to stop the treatment but after I saw the other patients trying, I wanted to continue even though it was so difficult.”

In addition to closely monitoring Srey’s progress and the health of her children, MSF teams regularly visit Srey to provide counseling support and make sure her family has enough to eat. “If I don’t have food to eat, I am really unwell and the side effects are really bad,” Srey explains.

A local village health nurse trained by MSF visits Srey daily to provide medication and helps her continue to adhere to the treatment program.

“Before I was a normal villager but now I don’t talk to anyone, I just stay at home,” Srey says. “My relatives only come sometimes to visit me for a short time, but they never stay very long. They know I have TB.”

Proper treatment of regular TB generally takes six months, while DR-TB can take up to two years to cure and involves expensive medication and unpleasant and occasionally severe side effects.

DR-TB can develop when a patient prematurely stops their regular TB treatment, so it is crucial that every TB patient continues their treatment until the end. This requires extensive patient education and comprehensive follow-up of all TB patients once they begin the home-based phase of their treatment.

“If the follow-up is not good, there’s a high chance that the patient will abandon treatment because TB patients often tend to feel better after a few weeks or months and they don’t think they need the medication anymore,” said MSF TB doctor manager Manesha Ahluwalia.

“The more contact you establish with the patient, the more they understand that they need to continue the treatment. It’s basically aimed at reinforcing the idea that completion of treatment is crucial, not only for the patient’s health but also for public health in general,” she added.

Since January, MSF staff have conducted over 6,000 consultations at Kampong Cham Hospital’s TB department and more than 600 new TB patients have been enrolled. In addition to numerous follow-up consultations and home visits with existing DR-TB patients, a telephone hotline provides home-based patients with direct contact in case of emergencies.

As part of the community outreach and education activities, an MSF doctor and counsellor participate in a TB education radio program twice a month and organize regular awareness-raising education seminars at pagodas, universities, high schools, mosques, and with other minority populations. All of these activities are aimed at increasing understanding of the disease and its treatment in the community, as well as reducing the stigma of TB.

“We don’t win the war against this disease only inside the hospital—it’s outside in the community where the real impact can be made through targeted proactive detection, providing quality care, comprehensive follow-up practices and effective awareness-raising activities,” says Jean Luc.