MSF Works To Stop Spread of Post-Monsoon Ailments in Pakistan

A monsoon in Khyber Pakhtunkhwa Province caused an increase in the number of people diagnosed with acute watery diarrhea, a condition caused by unclean drinking water, poor sanitation, and poor hygiene conditions. 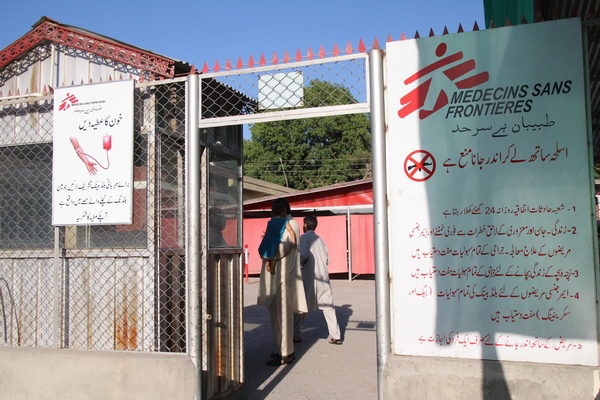 The emergency department of the District Headquarters Hospital in Timergara.

A monsoon in Pakistan’s Khyber Pakhtunkhwa Province caused an increase in the number of people diagnosed with acute watery diarrhea, a condition caused by unclean drinking water, poor sanitation, and poor hygiene conditions. In response to the growing number of cases, teams from Médecins Sans Frontières/Doctors Without Borders (MSF) and Pakistan's Ministry of Health (MoH) set up temporary treatment centers in Timergara, Hangu, and Sadda. Some 2,840 patients have received treatment since the monsoon season began in July.

“Although acute watery diarrhea is an easily treatable disease,” says MSF medical coordinator Dr. Jacob Maikere, “it can spread quickly, so prevention is as important as treatment. Access to improved sanitation facilities and clean water are vital [in order] to mitigate the spread of waterborne diseases like this.”

In response to the increase in patient load in the mother and child health department (MCH), MSF is also adding a new extension to its existing facility at the District Headquarters Hospital in Timergara that will open in early November.

MSF has been supporting the casualty department of Timergara District Headquarters Hospital—including the resuscitation room, observation rooms, and emergency operating theater—since 2009. Some 1,200 patients receive treatment each week in the hospital’s emergency room, from both MSF and MoH medical teams, and some 100 surgeries are conducted each month in the operating theater. MSF also supports the mother and child health department; provides mental health counseling and health promotion activities; and supervises sterilization facilities, waste management, and the hospital’s blood bank.

Since 1986, MSF has been working in Pakistan with Pakistani communities and Afghan refugees who are victims of armed conflict and natural disasters or who lack access to medical care. MSF teams are currently providing free emergency medical care in Kurram Agency (FATA), Khyber Pakhtunkhwa, Balochistan, and Sindh provinces.

MSF relies solely on private financial contributions from individuals around the world for its work in Pakistan, and does not accept funding from any government, donor agency or military or politically-affiliated group.