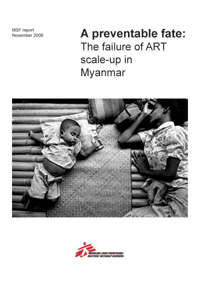 Geneva, Amsterdam, Yangon, November 25, 2008—Thousands of people are needlessly dying due to a severe lack of lifesaving HIV/AIDS treatment in Myanmar, said the international medical humanitarian organization Doctors Without Borders/Médecins Sans Frontières (MSF) in a report released today. Unable to continue shouldering the primary responsibility for responding to one of Asia’s worst HIV crises, MSF insists that the government of Myanmar and international organizations urgently and rapidly scale-up the provision of antiretroviral therapy (ART).

An estimated 240,000 people are thought to be living with HIV/AIDS in Myanmar. Among them, 76,000 are in urgent need of antiretroviral treatment, yet less than 20 percent of them are currently able to access it.

“Last year, around 25,000 people died of AIDS related illnesses,” said MSF Operations Manager Joe Belliveau. “A similar number of people could suffer the same fate in 2008 unless there is a significant increase in accessible antiretroviral treatment.”

With more than 11,000 people in treatment for HIV in the country, MSF is providing the majority of ART in the country. The government of Myanmar and other non-governmental organizations (NGOs) provide relatively little.

“It is unacceptable that a single NGO is treating the vast majority of HIV patients in a crisis of this magnitude,” said Belliveau. “It is unacceptable because it is wholly inadequate. We cannot meet the needs, and we therefore call upon those who can to take up this responsibility.”

Pushed to its limit, MSF has recently been forced to make the painful decision to drastically reduce the number of new patients it will treat. With so few other actors providing ART, there is little option to refer new patients for treatment elsewhere. “With so many needs still unmet, we strongly urge all actors, led by the government, to scale-up the provision of ART,” said Belliveau.

The urgent need for increased treatment is evident, yet investment from both inside and outside of the country remains grossly insufficient. In 2007, the Government of Myanmar spent just $0.70 USD per person on health care, with a paltry $200,000 USD allocated for HIV/AIDS in 2008. This sum is hugely disproportionate when compared to the extent of the needs and availability of resources. The government of Myanmar has proven its ability to treat HIV/AIDS patients in the public sector, but must commit the necessary resources to scale-up.

Likewise, the level of international humanitarian aid is strikingly low, around $3 USD per person, one of the lowest rates worldwide. This is significantly less than the far greater amounts received by nearby countries facing similar epidemics. Few of the big international donors provide resources out of concern over the appropriate and effective use of aid in the country, yet it is the people of Myanmar who suffer as a result. A 29 year-old male ART patient in Myanmar best explains why more should be done. “It is everyone’s responsibility to fight against this disease. All people must have a spirit of humanity in helping HIV patients regardless of nation, organization, and government.”

MSF’s work has shown that even though working in Myanmar can be challenging, providing lifesaving HIV/AIDS care and treatment directly to patients is possible. It is long overdue that the government of Myanmar and other international organizations step-up their efforts and make ART rapidly and widely available. It is crucial that they act now, in order to prevent the suffering and needless death of thousands of people.

MSF has provided essential healthcare services in Myanmar since 1993 and began an integrated program to support people living with HIV/AIDS in 2003. Since then, MSF staff has assisted thousands of HIV patients, working from 23 clinics, in five areas throughout the country. Services include counseling, testing, treatment of opportunistic infections, nutritional support, health education and most importantly antiretroviral treatment.