Data from the largest-ever multinational cohort of children infected with both TB and HIV shows urgent need for better TB tests for children. 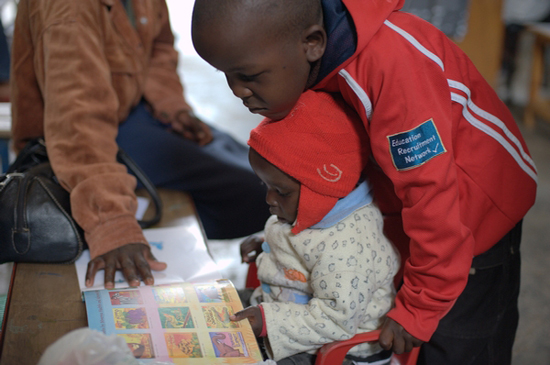 Young MDR-TB patients in Blue House, a facility in Nairobi where MSF treats TB and HIV.

GENEVA/KUALA LUMPUR/NEW YORK, NOVEMBER 15, 2012—Data from the largest-ever multinational cohort of children infected with both tuberculosis (TB) and HIV, released today by the international medical humanitarian organization Doctors Without Borders/Médecins Sans Frontières (MSF), definitively shows that there is an urgent need for better TB tests for children.

The study, presented at the forty-third annual Union World Conference on Lung Health in Kuala Lumpur, draws upon data collected over three years from 2,451 children with TB in 13 MSF projects across six countries. It shows that children co-infected with HIV and TB were at a greater risk of dying than children solely with TB, at 12.8 percent compared to 5.2 percent in HIV-negative children. And while more than half the whole cohort (56 percent) had pulmonary TB, only 6.4 percent had tested "positive" for TB with the most commonly used sputum smear microscopy TB test.

“When you’re only detecting TB in one out of ten children, you can be sure that many are falling through the cracks simply because they’re not being diagnosed, resulting in unnecessary deaths and the disease spreading to others,” said Dr. Philipp du Cros, head of MSF's medical department in London. “Most revealing of this sad reality is that until just last month, there was little data on the global burden of pediatric TB.”

The most commonly used TB tests today mostly rely on a sputum sample coughed up from a patient’s lungs. But this does not work well for children, either because they often have TB outside of the lungs or because there are insufficient numbers of bacteria to detect using sputum smear microscopy. It also causes problems in terms of collecting the sample, as children are rarely able to cough up sputum.

“In an attempt to get adequate samples, health workers are forced to use invasive and painful measures, involving forcing vapor into their lungs to make them cough up sputum, or sucking out sputum from their stomach,” said Dr Martina Casenghi, scientific advisor for MSF’s Access Campaign. “We urgently need a TB test for kids that doesn't rely on sputum and can use samples that are easier to obtain, like blood, urine, or stool.”

While newer TB tests like the Xpert MTB/RIF can significantly increase the number of children diagnosed with TB and give results within a day, they cannot confirm diagnosis in a significant number of children with clinical suspicion of TB for a variety of reasons, including that they cannot provide a sputum sample. While it is important to ensure access to better testing for children now, more work needs to be done to assess performance of the Xpert MTB/RIF in samples other than sputum and optimize its use for TB diagnosis in kids.

One of the main barriers to developing a TB test that works in children has been the lack of a gold standard to assess performance of new diagnostic tools. In a process led by the US National Institutes of Health (NIH), a consensus on clinical case definition and methodological approaches to apply in the evaluation of new TB diagnostic tests in children was developed. This consensus should open the way for academic groups and test developers to work towards better TB tests for kids.

“What we need to see now is test developers showing that children are a priority, and that will mean developing tests that respond to their needs,” said Dr. Grania Brigden, TB Advisor for MSF’s Access Campaign. “We need to move away from having to put children through excruciating procedures to get lab specimens that in the end don’t provide us with a diagnosis.”