Niger 2013: Tackling the Deadly Combination of Malaria and Malnutrition

In Niger, the deadly combination of malaria and malnutrition has created a vicious cycle that has a huge impact on some of the country's most vulnerable people. 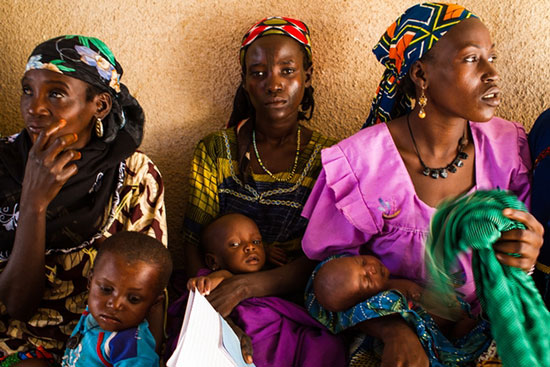 Mothers and their babies suffering from malnutrition and malaria queue for consultation with MSF staff at Guidan Roumdji hospital. 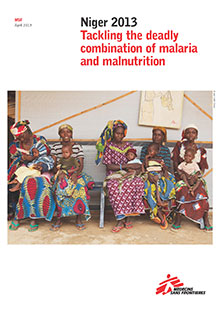 A Cycle of Malnutrition

In the Sahel region, life is governed by the seasons. A short but intense rainy season lasts from May to September, followed by a long dry season from October to April. People rely heavily on crops grown during the rainy season. Typically there is a long lean period between harvests, known as the "hunger gap," when people live on their dwindling food supplies as they wait for the next harvest.

Years are "good" or "bad" depending on the specific climatic conditions and the resulting volume of the harvest. However, malnutrition is endemic in some areas of the region and, even in a "good" year, during the hunger gap, acute malnutrition often rises above the alert threshold of 10 percent in children under five, with frequent peaks reaching or even surpassing the 15 percent emergency threshold.

In Niger, this recurring situation reached crisis levels in 2005, generating a major emergency response by national and international organizations. The government of Niger responded by adopting a novel protocol for the treatment of malnutrition, involving a home-based model of care and a new product known as ready-to-use therapeutic food. The therapeutic food could be fed to a child at home by its mother, so freeing up hospital beds and medical staff, and allowing the treatment to be decentralized into the community. By moving away from the previous hospital-based model of care, the treatment of children with severe acute malnutrition (SAM) could now take place on a massive scale. This system, set up during the emergency response, has since been implemented throughout the country.

Malnutrition and Malaria, a Deadly Combination

The period of the hunger gap, when malnutrition is at its peak, coincides with the rainy season, when mosquitoes breed and the number of malaria cases shoots up.

Malnutrition and malaria combine in a vicious circle that has a huge impact on morbidity and mortality among the most vulnerable in the population. Malnourished children have very weak immune systems, so their bodies are less able to fight diseases such as malaria, diarrhea, and respiratory infections. Children who are sick with these diseases are also more likely to become malnourished.

In tandem with its efforts to tackle malnutrition, the government of Niger has put in place several measures to reduce childhood mortality. For the past few years, children under five have received free health care, while significant steps have been made in immunization coverage, recruitment of health staff, and in the number of malaria cases treated.

Doctors Without Borders/Médecins Sans Frontières (MSF) has also carried out a number of specific activities in Niger aimed at tackling this chronic emergency by improving access to health care for pregnant women and children under five. In 2012, medical teams in the regions of Zinder, Maradi, and Tahoua run outpatient feeding programs in some 37 health centers. Severely malnourished patients who needed hospital care were admitted to inpatient feeding centres in Zinder, Magaria, Madarounfa, Guidan Roumdji, Madaoua, and Bouza hospitals.