Malaria is particularly dangerous for malnourished children, and the cases of malaria are flaring right now during Niger's rainy season; MSF has treated nearly 130,000 children already. 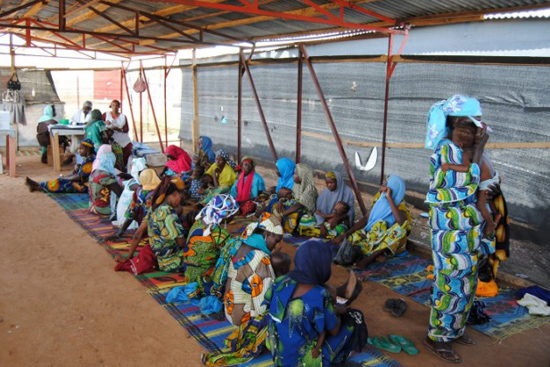 Mothers and their children wait inside the outpatient nutritional rehabilitation center in Dan Issa, Maradi region. Malaria is particularly dangerous for malnourished children and the cases of malaria are flaring right now during Niger's rainy season.

Doctors Without Borders/Médecins Sans Frontières (MSF) teams in Niger are particularly on alert during the rainy season between July and November. Malnourished children are at risk of contracting malaria and many who are already suffering from it become extremely vulnerable as a result of the combination. Malaria further reduces appetite among these children, weakening them even more and creating a deadly spiral from which it is difficult to escape. During this year’s rainy season, MSF has treated nearly 130,000 children with malaria in the Maradi, Zinder, Tahoua and Agadez regions.

Like many other mothers, Zainab has crossed the borders of northern Nigeria into Niger with her 16-month-old daughter. They have traveled nearly 125 miles (200 km) to reach the outpatient nutritional rehabilitation center (CRENAS) in Dan Issa. "My daughter had convulsions and we set off yesterday. We first took a cabou-cabou (motorcycle taxi) and then three bush taxis," Zainab said. When they arrived, a nurse performed a paracheck test on the little girl, which confirmed that she had malaria. The disease was worsening the child's anemia.

In Niger, malaria outbreaks flare during the rainy season, when stagnant pools of water become breeding grounds for mosquitoes. The mosquitoes bite humans and transmit Plasmodium falciparum, malaria's principle pathogenic agent in the region. By July this year, 8,676 cases of childhood malaria had already been recorded in Madarounfa district. The figure represents nearly 50 percent of all patients—adults and children combined—in this district.

When they arrive at the CRENAS, children are screened and treated at no charge. If a simple case of malaria is confirmed, the child is sent home with a combined treatment. However, if the child is suffering from complicated malaria, such as malaria with neurological manifestations, or develops malaria-related complications such as anemia, hypoglycemia or respiratory distress, he or she is referred to the Dan Issa malaria treatment unit.

Malnourished children who have developed a serious form of malaria, and are thus doubly weakened, are treated at an intensive nutritional rehabilitation center (CRENI).  In addition to receiving ready-to-use therapeutic foods, they are also given antimalarial treatment. "Malaria is an additional threat for malnourished children as it leaves them more vulnerable," says Dr. Sibibé, medical director at the Dan Issa CRENAS. Malnutrition creates a relative immunosuppression. The children are at higher risk of developing complicated malaria and lose the energy to fight illness. A child who is underweight for his or her age is thus twice as likely to die as a child whose nutritional status is normal. "One of the reasons that malaria is so deadly is that it causes anemia, just like malnutrition," said Dr. Susan Shepherd, coordinator of MSF's nutrition working group.

Malaria thus ravages Niger. With more than 2 million cases recorded since the beginning of the year—more than twice the number recorded in 2009—the epidemic continues to grow. "The hospitals' pediatric departments are overflowing," said Dr. Laouali, who works with Forsani, a Nigerien NGO, in Maradi. "In certain feeding centers, more than 70 percent of children have malaria." His teams, which have provided support to the general hospital's CRENI since June, are now backing up the pediatric unit's staff, which has been overwhelmed by the surge of patients. At least 150 children have died from malaria in the last two months.

To reduce malaria's terrible impact on the population of children—whether they are malnourished or not—MSF is working on a pilot project in Magaria with the Integrated Health Centers, seeking to improve access to health care. The organization's community workers are educating the populations at risk and are fanning out to villages to conduct rapid diagnostic tests for malaria so that early treatment can be provided—before it's too late and before the child has lost the strength, tenacity and will to hang on to life.

In Niger, MSF runs medical and nutritional programs in the regions of Tahoua, Maradi, Zinder and Agadez.