GENEVA/NEW YORK, JULY 27, 2016 — A major humanitarian operation is needed to save lives in northeastern Nigeria’s Borno state, where more than 500,000 people are living in catastrophic conditions in villages and towns affected by the conflict between the military and Boko Haram, the international medical humanitarian organization Doctors Without Borders/Médecins Sans Frontières (MSF) warned today, after finding extremely high levels of malnutrition in another town where MSF teams recently gained access.

About 15,000 displaced people are sheltering around Banki, a town near the Cameroonian border that is accessible only by military escort. MSF medical teams found that as many as one in 12 people there died in the past six months. Nearly a third of the children are malnourished, and 15 percent of children under five are suffering from severe acute malnutrition. 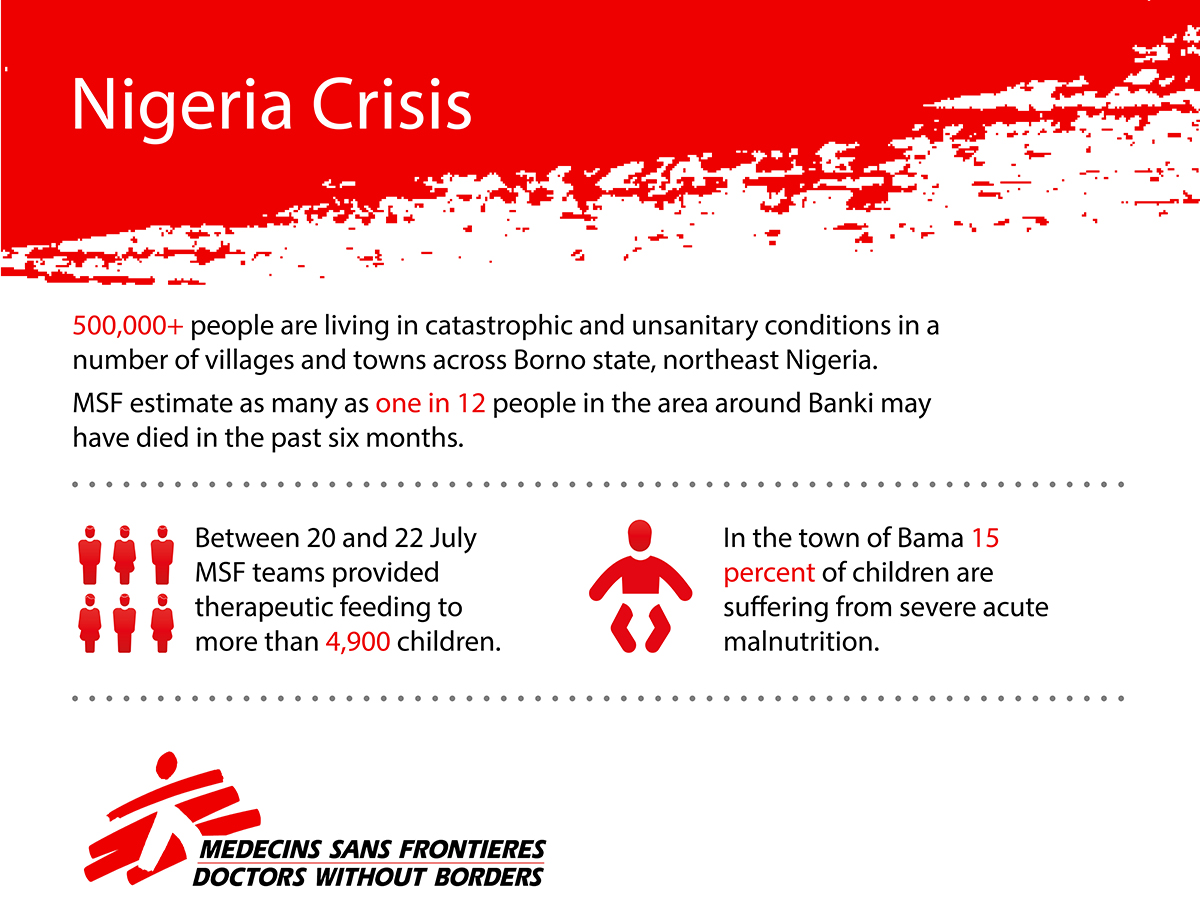 “In Banki, as in a number of other areas, people have almost no access to humanitarian aid,” said Hugues Robert, MSF emergency program manager. “People are gathered, isolated and cut off in a half-destroyed town and are totally dependent on external assistance, which is cruelly lacking. If we don’t manage quickly to provide them with food, water and urgent medical supplies, malnutrition and disease will continue to wreak havoc.”

To respond to this humanitarian emergency, MSF teams provided therapeutic feeding and measles vaccinations to more than 4,900 children from July 20 to 22. A total of 3,600 families received emergency food aid, and six people in critical condition were transferred to a hospital in Mora, Cameroon. MSF will also continue to provide clean water and improve sanitation.

The situation in Banki is similar to that found by the Nigerian authorities and other MSF teams and aid organizations in different parts of Borno state. In the town of Bama, for example, MSF teams estimate that 15 percent of children are also suffering from severe acute malnutrition.

"We’re gradually discovering the extent of this crisis and we are particularly concerned for people in the remote areas that we have not been able to access,” Robert said. “As the rainy season approaches, we are also aware of the growing threat of malaria.”

MSF calls on international organizations to mobilize to provide emergency food and medical aid to the people of Borno state.

"We are committing to a long-term operation in collaboration with the Nigerian authorities, and want to do our utmost to assist these vulnerable people,” Robert said. “However, there is a high level of insecurity in the region, with ongoing conflict and roads that are sometimes mined. Logistics are further complicated by the onset of the rainy season, which makes roads muddy and impassable. In conditions as precarious and dangerous as these, it is essential that people are allowed to seek refuge in safer areas, either in Nigeria or in neighboring countries, and that those who are seriously ill are referred to hospitals in the region.”

The region is reaching breaking point due to attacks by Boko Haram and a strong military response which has been launched to curb the violence. With more than 2.7 million people uprooted from their homes, the Lake Chad basin is currently home to one of the African continent’s biggest humanitarian crises. In response to the continued displacement and humanitarian needs, MSF has significantly scaled up its medical activities and assistance to people in the Lake Chad region in Chad, Cameroon, Niger and Nigeria. In 2015, MSF medical teams provided more than 340,000 medical consultations, treated 13,000 children for malnutrition and vaccinated more than 58,500 people against cholera.