In Maiduguri, the capital of Nigeria’s Borno state, Doctors Without Borders/Médecins Sans Frontières (MSF) cared for exceptionally high numbers of malnourished children throughout 2021 as conflict and a major measles outbreak exacerbated the already massive health needs. These and other factors have driven a spike in hospital admissions and outpatient consultations for malnutrition higher than that of recent years and may signal a broader health emergency in the region.

As of December 14, we have admitted 2,465 severely malnourished children for hospitalization in our inpatient therapeutic feeding center (ITFC) in Maiduguri, representing an increase of 13 percent from the year before.

At the same time, enrollment in our outpatient therapeutic feeding program continues to increase, with 4,144 patients enrolled so far this year, more than 50 percent more than were seen in the same period in 2020. Out of all admissions for severe acute malnutrition, more than 80 percent were children living in households displaced by the ongoing conflict in Borno state.

“While we cannot extrapolate from hospital data a general understanding of people’s nutrition status, this year has clearly shown us that displaced people in particular remain extremely vulnerable to peaks of malnutrition and the numbers of malnourished children we are receiving suggests it may be getting worse,” said Shaukat Muttaqi, MSF head of mission in Nigeria. “This is a concerning dynamic and needs further analysis and engagement from all concerned actors to ensure proactive and preventative action so the situation does not get worse.” 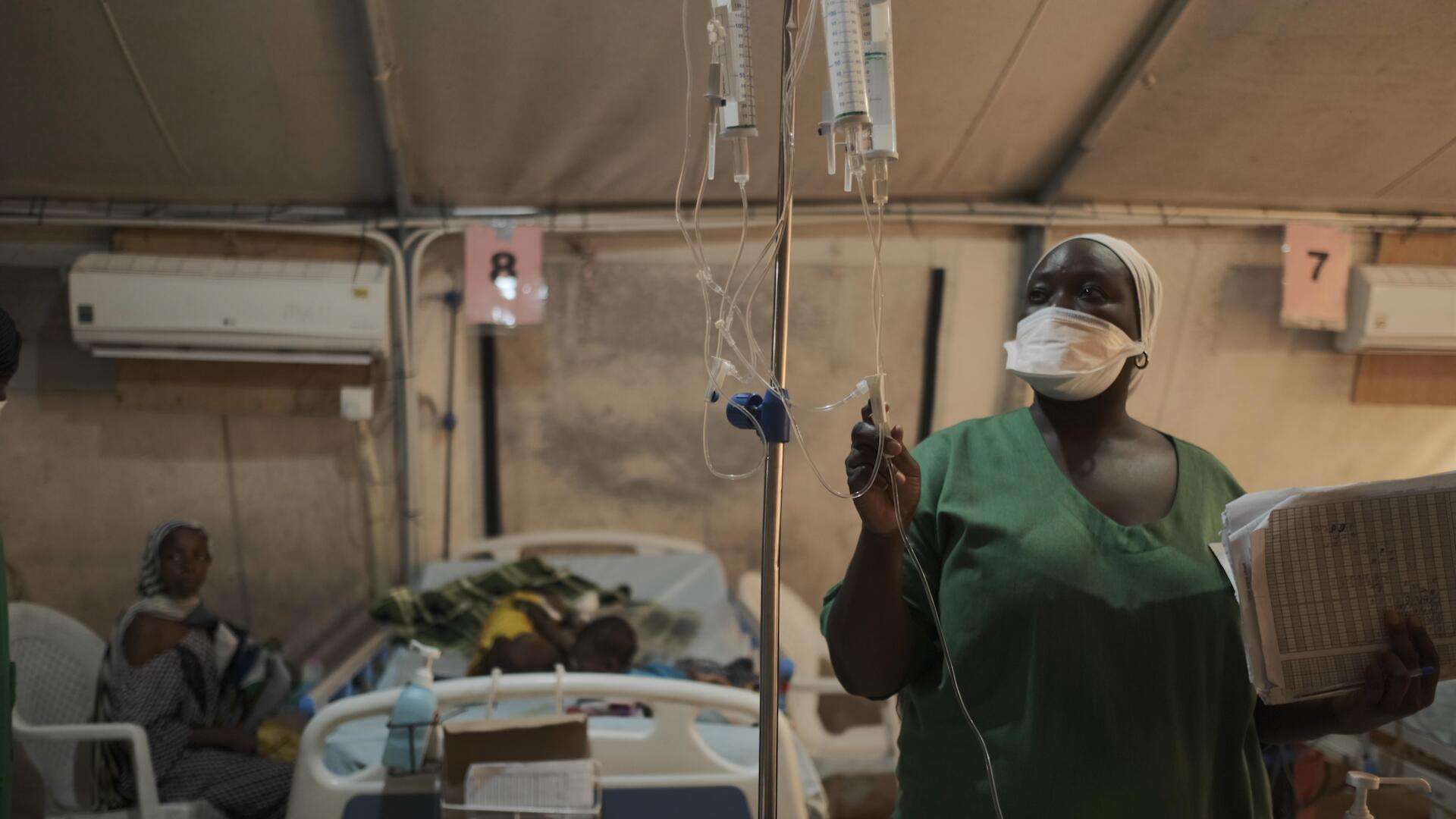 An MSF nurse monitors the IV fluid admitted to a malnourished child in the MS therapeutic feeding center in Maiduguri, Borno State.

MSF’s 120-bed ITFC is the largest single provider of hospital care for malnutrition in Borno state and represents a third of all beds available for malnourished patients. While the factors affecting malnutrition are complex—including the direct and indirect impact of conflict on food security, access to humanitarian aid, and health status—admissions data and the increase in patients this year suggest a worrisome trend.

One important medical factor contributing to the high malnutrition admissions was an outbreak of measles, which began in February. From January to October 2021, our teams at the only pediatric hospital in Gwange treated 2,974 children for measles on an inpatient basis, while 2,545 more received care at the outpatient department within the same period. During outreach activities in Zabarmari village in Borno state’s Jere local government area from mid-February to the end of July 2021, our mobile clinic team treated to 2,517 children suffering from measles.

While the traditional hunger gap period typically occurs from June until November, we admitted 60 to 150 percent more patients per month from March to May in 2021 compared to 2020. Meanwhile, the numbers of malnourished patients needing treatment have remained higher than previous years throughout the entirety of the hunger gap period. 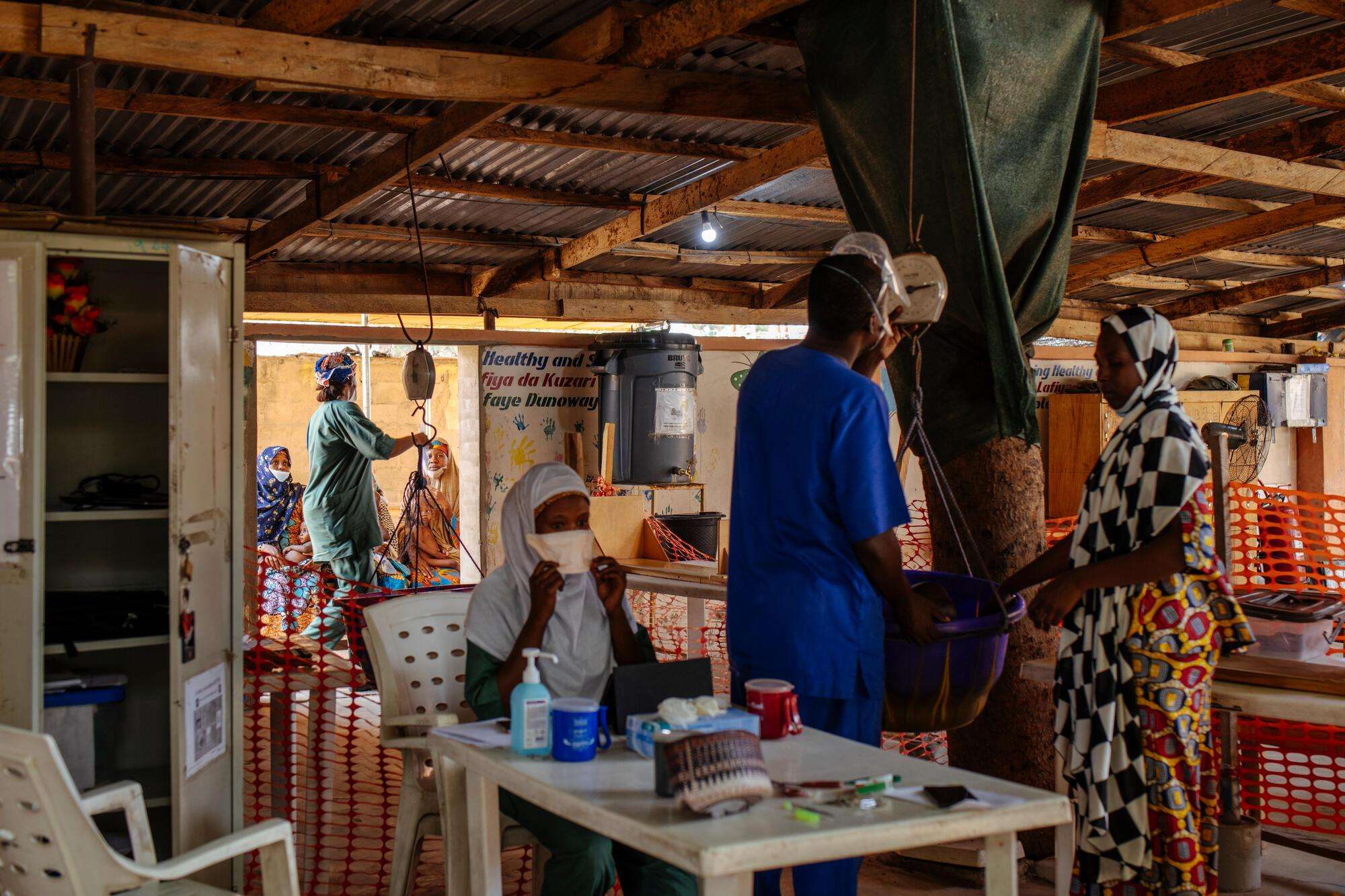 An MSF nurse weighs children as part of the initial medical assessment at the inpatient therapeutic feeding center in Maiduguri, Borno State.

This year, we relocated our ITFC in June to a new facility to allow for increased overflow capacity, but the outpatient program continues to see unprecedented levels of admission.

Outpatient therapeutic feeding (ATFC) programs provide medical care and therapeutic food to children, which reduces the risk of life-threatening medical complications if they get sick. We are currently

providing ATFC care in five locations in Maiduguri but the drastic increase in enrollment is a clear sign that more availability of care is needed.

Gaps in vaccination also pose an ongoing threat to the community, as the impact of the measles outbreak this year has already highlighted. Although a mass measles vaccination campaign was undertaken this year in response to the outbreak, vaccination rates remain chronically low and routine immunization is not always available.

“We are now approaching the end of the hunger gap period, however what we saw this year is deeply concerning,” says Muttaqi. “The same factors remain in place that could allow for further deterioration next season. Renewed focus and attention is needed from all relevant actors to prevent an even more serious deterioration during the hunger gap next year.”