Pakistan: Doctors Working Around the Clock 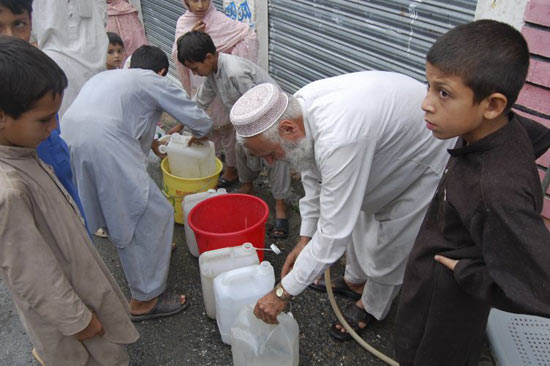 James Kambaki, MSF project coordinator in Balochistan province, reports on the situation and on MSF's activities.

We’ve been running a number of mobile clinics in Fadfedar canal, in the areas around Manjoshori, and in Khabula, where the people we struggled to reach not long ago are now relatively accessible.

Here in Dera Murad Jamali (DMJ) we are treating a lot of watery diarrhea and we’ve begun to support obstetric emergency in the hospital. The number of women needing consultations has really increased and the doctors are working 24 hours. We’re seeing a lot of women with placenta praevia, eclampsia and all manner of obstructions, complications, and obstetric emergency cases. Our doctors are working around the clock to treat them.

The sheer number of people in the city is complicating matters. DMJ usually has a population of approximately 50,000, but the flooding has meant that tens of thousands of people from the surrounding countryside and even from areas hundreds of kilometers away have poured into the city. The official figure for the influx is 60,000, but looking around, it’s easy to see that it could be much higher.

Most of the towns and areas around DMJ are completely underwater, and their inhabitants have come here. In the first few days of the flooding, there was a mass movement of people, which was terrible to witness. On the surrounding roads outside the city, there were thousands of people all moving in the same direction. People were on tractors, on ox carts, on donkey carts, on motorbikes, on tuk-tuks, and on foot, picking up anything to cover themselves. Children were being carried, and people were carting everything they owned perched on top of their heads. Animals were dying on the way, people were struggling to walk, and the heat was extremely intense. We distributed plastic sheeting and thousands of hygiene kits and cooking items.

With so many people in the city, clean drinking water is still a major concern. We’ve seen an increasing number of watery diarrhea cases, which we are managing, but in the past few days we have had a number of incidents when people have been so ill that they have died on the way to the hospital. In the hospital compound, workers have found bodies of people who died just before they made it to us. It’s terrible as we have no idea who these people are.

The water situation is really appalling. There are canals and small ponds filled with contaminated flood water that people are drinking from. We have a number of water bladders and we are distributing [water] constantly. At the moment, it is still not enough. But a major water purification system should be up and running in a few days, which will really help alleviate the situation.

There are tents and temporary shelters everywhere, pitched in sports stadiums, in school grounds, in colleges. There is one college with around 200 tents but not a single latrine. In the next couple of days, we are going to help build 250 latrines there and others in a number of other locations. In situations like this, where water-borne diseases are a continuing threat, prevention is vitally important.

With so much overcrowding, displacement and need, people are very angry. I’ve seen quite a few protests and when we do distributions it’s very tough. People tell me they are upset because a lot of them have not received food and some have no shelter. I met one man who had travelled over 200 kilometers [120 miles] with his family. They had nothing and were desperate for food and for somewhere to stay. He was extremely angry and I couldn’t blame him. But we’re doing all we can to help people like him.

The team I have working with me are amazing. They are strong and they are working long hours. In the next few weeks our main focus is going to be treating the diarrhea cases and ensuring that more clean water is distributed. It’s a massive task, but we are making progress.