An interview with a clinical psychologist who has spent the past nine months working among Palestinians in the flashpoint West Bank city of Hebron. 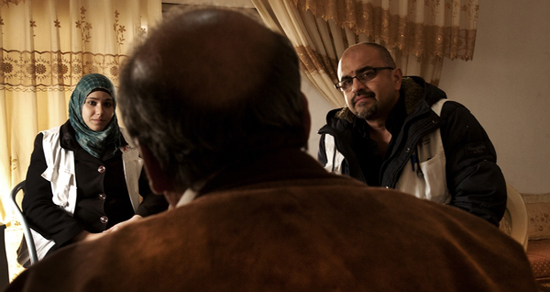 MSF counselors speak to a man in Hebron, where MSF carried out 1,726 individual mental health consultations and 945 medical consultations in 2011.

For the past nine months, Manuel Francisco Morantes, a clinical psychologist from Colombia, has been working in the Doctors Without Borders/Médecins Sans Frontières (MSF) project in Hebron. Located in the West Bank, Hebron has long been a flashpoint in the Israeli-Palestinian conflict due to the long-term presence of several hundred Israeli settlers who clash often with Palestinian residents, as well as the existence in the city of religious sites widely revered by Palestinians and Israelis alike.

MSF’s project in Hebron provides mental health support to Palestinian families affected by the conflict. Some of the people who receive care have been directly affected by security operations launched by either Israeli or Palestinian forces. Others were wounded in fights with settlers or were victims of attacks by settlers. Still others have suffered through domestic or household violence.

In this interview, Morantes talks about the consequences of violence on the mental health of the people he treats and explains how MSF teams respond to the needs for psychosocial support.

During your time in Hebron, what have been the primary issues the people you treat are facing?

People living in the district of Hebron and especially in an old part of the city known as H2 are faced with many problems related to the Israeli-Palestinian conflict, but also the intra-Palestinian disputes. There are families who live in neighborhoods near Israeli settlements or in areas where there are frequent movements of settlers and soldiers.

The psychological and psychosocial consequences vary depending on the area where the families live. Those who live near settlements or in the boundaries between the Palestinian and settler areas are often harassed and attacked by settlers and become hypervigilant and suspicious. The high frequency of violent incidents in these areas has led people to be alert about every situation. Many patients have described this experience as “living under fear every day of your life, you cannot change it!” In fact, they don’t have many protective measures to manage the danger and they are feeling vulnerable, powerless to defend themselves and hopeless regarding their situation.

As a consequence of this high level of distress, people often suffer from sleeping disorders because they overreact to sounds during the night and cannot stop thinking about their problems. As they don’t have the skills to manage this stress, their reaction to this tension can manifest as illness (digestive, nervous, muscular, cardiac problems), irritability, and problems within the family. The social life is also affected. Many of them prefer not to visit their relatives or friends, fearing that their houses might be destroyed or damaged, that they might have an incident crossing the checkpoints, or they might be attacked by settlers.

We also see children who have been arrested, imprisoned, and interrogated with the accusation of throwing stones at settlers or soldiers. Sometimes their arrests are fairly forceful. We are talking about children who are between the age of 10 and 15 years old and the whole process of arrest, interrogation, and detention can be a very traumatic experience for them and can have a serious impact on their mental health.

There are also many families that have experienced a military incursion to their house with the aim to arrest one member of the family. Usually these incursions happen at night and can become very violent. We see many patients, especially children, who suffer the psychological consequences of such events. We also see people who have been attacked while crossing a check point, families that are persecuted by Israeli or Palestinian authorities, and adult men who have been imprisoned in Palestinian or Israeli prisons.

The mental health consequences for the people to whom we provide support are various: anxiety disorders, fear, stress, lack of hope, insomnia, the feeling that they are always under persecution, the thought that something bad will happen. We see children who suffer from nightmares and other sleep disorders, bed wetting, fear of being separated from their families, isolation, problems at school, increased aggressiveness. Amongst adults we also see an increase in aggressiveness that sometimes leads to domestic violence problems. We see people who have lost all hope and suffer from depression or are faced with dissociative disorders. But we also have some more severe cases, with people who suffer from traumatic stress disorders and post-traumatic stress.

How do MSF teams respond to the mental health needs in Hebron?

MSF has run a psychosocial support project in Hebron since 2000 with the aim to assist people who are affected by the conflict. Right now our team consists of three expatriate psychologists, three psychosocial workers, and one doctor, but it is also supported by logistics and administrative staff. MSF provides short-term psychotherapy, medical and social assistance, and referral to medical and social structures for the people who are in need. In 2011 we carried out 1,726 individual mental health consultations and 945 medical consultations in Hebron.

Do any of them stand out for you?

There are many stories from the months that I have worked here. Stories of children being detained and interrogated; of children seeing armed soldiers raiding their family’s house at night and fathers or brothers arrested; of people being attacked, beaten, and humiliated at check points or outside their houses . . .

Or this story of a Palestinian man in his 40s: he was crossing a check point because he had to go to the doctor. He had problems with his heart. While he was being searched by the soldiers there was a misunderstanding between them. [The man said he was shot in the arm, beaten and then detained for several week before being released.] After this incident this man has developed a serious post-traumatic stress disorder and it was very difficult to assist him in dealing with his pain, anger, and frustration. An incident that lasted less than 15 minutes has changed his life forever and has caused him and his family a lot of suffering.