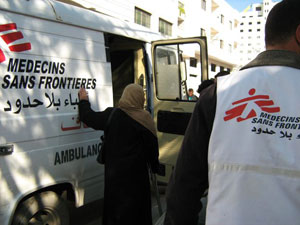 The MSF team has reopened its clinic in Gaza City in order to treat wounded people and to support hospitals overloaded by a large influx of patients due to the Israeli incursion in the north of the Gaza strip. MSF has also made donations of medical items and essential drugs to some hospitals in the area.

Since Sunday, March 2, an MSF team made up of two medical doctors and four nurses has been able to reopen the MSF clinic in Gaza City to offer care to wounded patients and to perform minor surgeries. On Friday and Saturday movements to the clinic were impossible due to widespread violence.

“The situation is critical,” said Duncan Mclean, MSF head of mission. “More than 200 people were injured during the fighting. Most of them have been treated in Beit Hanoun and Kamal Edwan hospitals in the north of Gaza, where the attacks are concentrated, and at Shifa hospital in Gaza City. Furthermore, there is a lack of fuel for ambulances. Yesterday, ambulances could not circulate and reach patients. Today, enough fuel was available to continue their work for one more day.”

The intensity of the fighting makes all movement difficult. It appears that some wounded people living far away from hospitals could not travel by themselves to receive treatment. “When the fighting becomes less intense, some other wounded people may come to the hospitals and health centers,” said Mclean. “We are therefore ready to treat a number of patients.”

Lack of drugs and medical items in the hospitals

Since Friday, MSF has donated medical items and drugs to Beit Hanoun and Kamal Edwan Hospitals in the north of Gaza to ensure adequate care for the wounded. Donated items include dressings, intravenous infusions, drugs for anasthesia, antibiotics, and pain drugs. With a pre-positioned emergency stock in Gaza City, MSF is preparing for further donations to hospitals—primairly to Shifa hospital—and to other health structures according to identified needs.

The Israeli incursion in the north of Gaza and air strikes throughout the strip, in response to rocket attacks against Israel, have reportedly killed 90 people, including civilians. “The civilian populations are suffering on both sides: the Israeli population from the Palestinian rockets and the population in Gaza from the response of Israeli forces,” said Mclean. “Our main concern today is access to health structures for all wounded in Gaza.”