In the mornings, the emergency room of Al Salam hospital in Khamir, Yemen, is always busy. The same is true of the surgical and maternity wards. With more than 29,000 people admitted to the emergency room last year—and one-third of them remaining to receive other services—the hospital is an essential treatment center for Khamir and the surrounding districts.

In Arabic, salam means peace, an evocative name for a hospital that received 830 victims of violence in 2016. 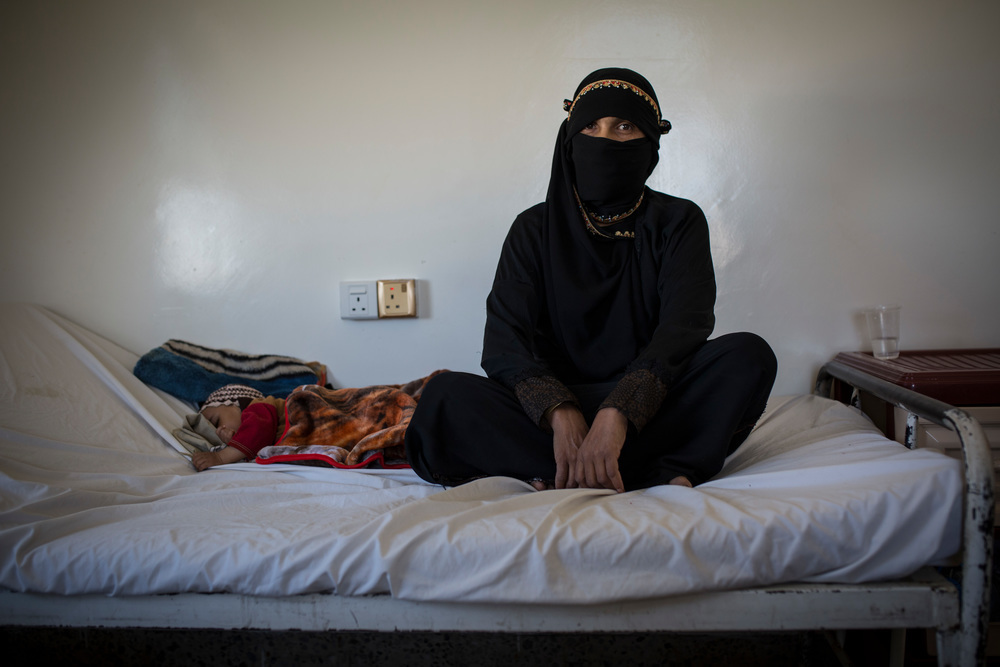 Hadiya is tired—tired of repeated pregnancies, tired of walking for two hours to get water. But more than fatigue, it’s anxiety that predominates. Hadiya has six children; the youngest, Yahya, is lying next to her, asleep. Whenever she breastfed him, he would become feverish, she says. Looking for a solution, she began to alternate breastmilk with powdered milk and cereals, but his fevers got worse. Hadiya had no choice but to leave her farm and her children to bring Yahya to hospital.

“While I'm here, my oldest child, who is 13, is taking care of everything at home,” says Hadiya. Her husband is away, selling khat in a nearby town to cover some of the costs of the hospital trip. While hospital treatment is free, transport to Khamir is expensive—it cost Hadiya 15,000 Yemeni rials (nearly $50) to get there.

Hadiya and her family live in Shihara, a remote village situated on top of a mountain. The war has not affected them directly, as Shihara is not a strategic place. Like most people in Yemen, however, they are suffering the consequences of the war, including the rising costs of basic goods and transport.

Living in Shihara brings its own difficulties, such as the distance from a hospital, the quality of the water supply, and the lack of available medicines. Hadiya has six living children, but she's lost five. She's had two miscarriages, and two babies died in early infancy. Her seven-year-old daughter died in a hospital in Sana'a after months of treatment. 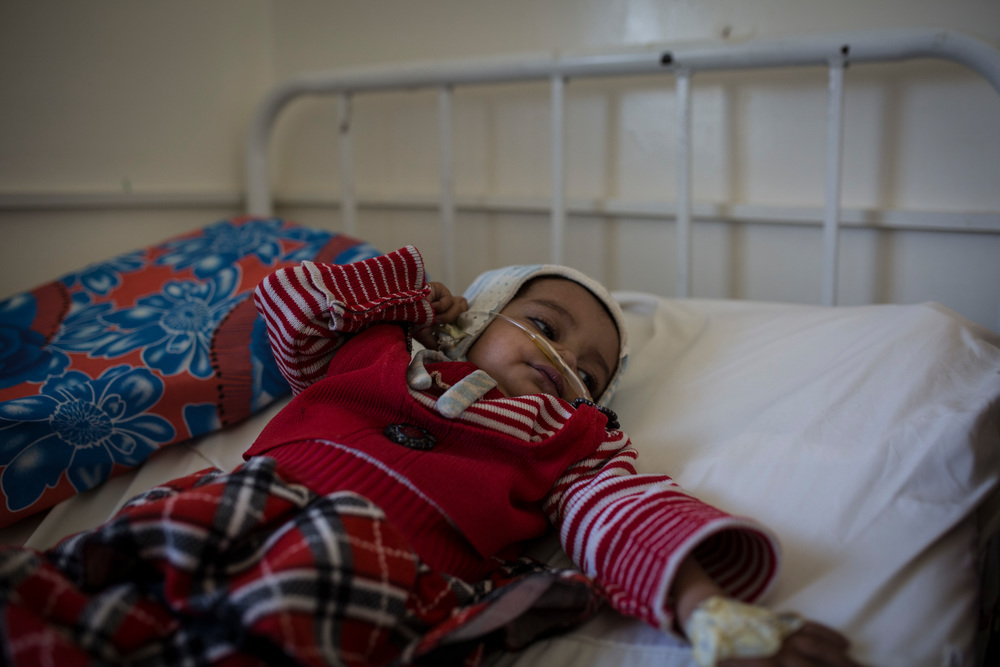 Sumaya is almost two years old, says her mother Aisha. To look at her, however, you’d guess she’d been born just a few months ago.

Sumaya suffers from rickets, a disease caused by deficiencies of calcium, magnesium, and vitamin D. Over the past months, Aisha has taken her daughter from one hospital to another, hoping to find a cure. None of the treatments have worked, and Aisha feels helpless. Her family has spent most of their savings on transport and treatment in different hospitals around the country. 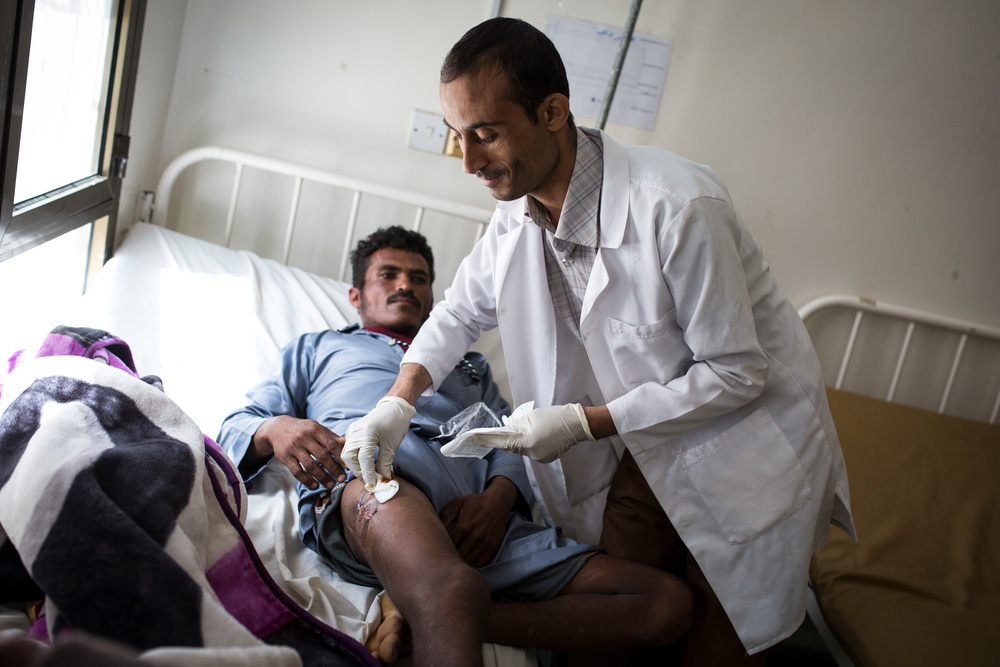 Saghir Abdallah waits for a nurse to clean his wound. Accompanied by his brother, he looks relaxed. Soon, it will be time for him to leave Al Salam hospital in Khamir, where he has had two rounds of surgery for a gunshot wound he received in January.

Saghir is around 30 years old—he isn’t exactly sure. He’s from a small village in the Othman valley, one of the poorest and most remote areas of Amran governorate. He makes a living from small jobs in the construction sector and working in the khat fields, usually earning about 2,000 Yemeni rials (a little under $10) for a day’s work. Since being injured, he has been unable to work to support his family—a major undertaking when you have two wives and six children. Saghir and his brother were forced to borrow 100,000 Yemeni rials ($400) to cover the transport costs to hospital and food for the family.

“I must come to the hospital every three days for the next two weeks so the nurse can change my dressings,” says Saghir. “If we go back to the village, it’s a round trip of more than six hours and it will cost a lot of money, so we're going to stay here.” Both brothers are now in debt as a result of Saghir’s injury. “We're going to have to work hard to pay the money back,” says Saghir. “In a good month, we can work for 20 or 25 days, especially from spring to autumn.”

Saghir looks impassively at the nurse cleaning his wound. A dozen stitches on his right thigh recall the reason he’s there. “I was chatting with a friend when someone we know stopped his motorbike near us,” he says. “He shot at me and left. My friend drove me to the hospital—it took us more than three hours.” Saghir will not say more about the motives of the shooter, only that he is now in prison.

In Yemen, weapons are everywhere. Even if the prices are too high for most people to afford (a machine gun costs about $50), it’s common to see men walking down the street with guns on their shoulders. 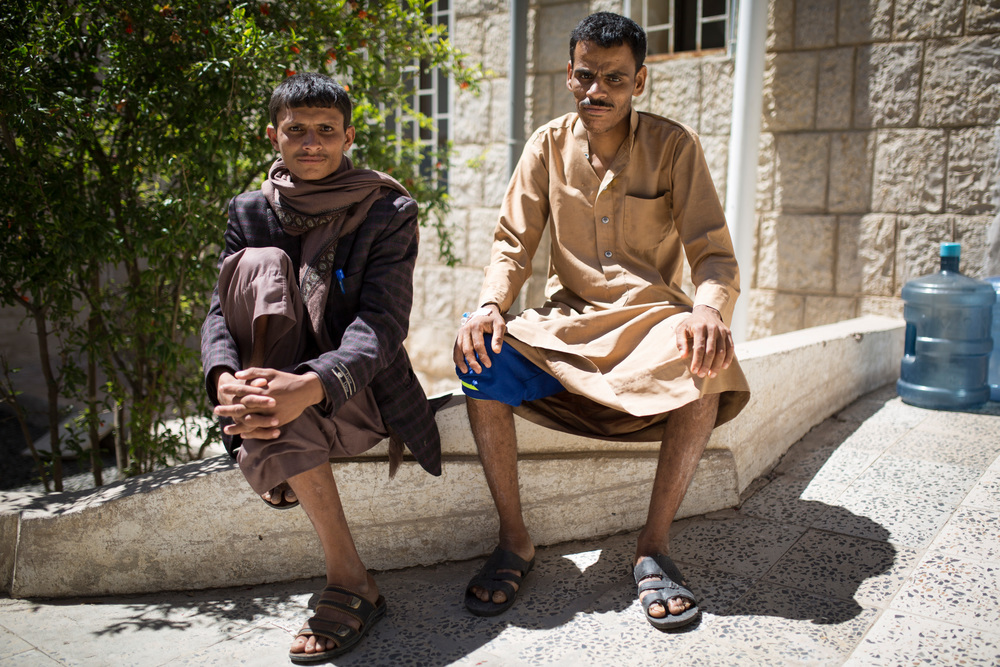 Abdulmarid and Yousef sit in the sun outside the operating theater at Al Salam hospital. They're brothers. Abdulmarid, the eldest, was wounded two weeks ago by a grenade. He lets his brother tell the story.

Abdulmarid had just shown someone how to use a grenade, says Yousef. After putting the grenade back on his belt, he returned to the khat plantation where he worked. Hearing a strange noise, he realized the pin of the grenade hadn't been replaced properly. He had just enough time to grab the grenade from his belt and throw it behind him. In the explosion that followed, he was wounded in the back by shrapnel. His brother took him to the nearest health center in Al Qafla, which is supported by MSF. Having no surgical facilities, the staff sent him to Al Salam hospital in Khamir.

Abdulmarid, says Yousef, is certain about one thing: he will never touch a grenade again.