Pediatric TB: "Check the Child on The Patient?s Knee!"

Working to improve diagnosis and treatment of children with TB

Dr. Grania Brigden, the advisor on tuberculosis with MSF’s Access Campaign, describes how children with TB that could be treated often go without care because of a lack of effective diagnostic tools and approaches. 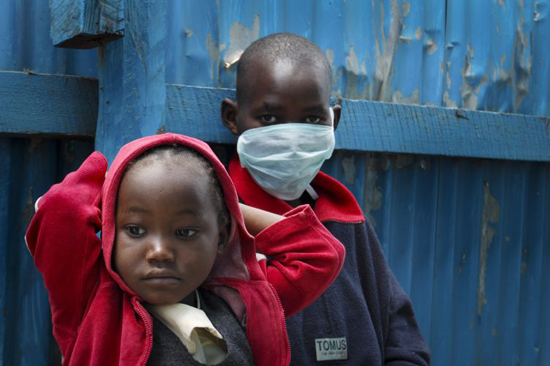 A child in Kenya awaiting testing for tuberculosis.

Tuberculosis (TB) is one of the top ten killers of children around the world. Although the disease is curable, many children are not diagnosed, and as a result, not given the treatment that could save their lives. Dr. Grania Brigden, TB advisor with MSF’s Access Campaign, describes the challenges we face in treating paediatric TB:

How successful are we at diagnosing and treating children with TB from a global perspective?

Unfortunately, at the moment, we’re not that successful at all. TB is a curable disease, but still around 130,000 children die of it each year. Currently, we estimate that around 10 to 15 percent of the nine million cases of TB each year are in fact children. But since the tests we have to diagnose TB are so unreliable, that figure is likely to be a gross underestimate.

As a caregiver, what are the frustrations in diagnosing and treating children?

We know TB can be cured and lives can be saved. But because there’s simply no test for TB that will reliably diagnose the disease in children, caregivers can often be uncertain whether to treat or not. We have to work with a number of different tests, none of them conclusive, to try to get to a correct diagnosis.

It’s frustrating because you want to get it right and get the child on treatment, and yet you hesitate, because in diagnosing TB, you are then asking the child and the parents or caregiver to enrol in a six-month course of treatment—or up to two years if the child has drug-resistant TB. And if they’re also co-infected with HIV, you may be asking small children to take a large amount of tablets every day.

Why is it so hard to diagnose children?

Aside from a clinical examination for symptoms, the most common methods to diagnose TB today aren’t really adapted for children. Kids often have problems coughing up a good enough sample of phlegm or sputum from their lungs, and a sputum sample is what’s needed for examination under the microscope or for use in “culture,” when you grow the bacteria in order to get a diagnosis.

Ideally what we’d need is a test that works more easily for children, for example a blood- or urine-based TB test. Until that time, we definitely want to encourage treatment providers to make use of the different methods that exist to make it easier for children to deliver a good sample for testing.

And given [that] there are no conclusive or adequate tests available, it is very important for caregivers to analyze the clinical picture and symptoms in their patients to diagnose TB.

The new test can tell you in just two hours whether you’ve got TB, so that’s a big improvement on the older methods. Culture tests can take up to three weeks to deliver a result, and even up to three months if you need to identify the individual drugs a person’s TB disease might be resistant or susceptible to.

Currently, there is not a lot of evidence yet about the new test’s effectiveness in children, but the evidence that does exist suggests that the test does indeed have a higher detection rate of TB in children than microscopy, [which is] when you try and find TB bacteria by looking at a sample under a microscope. But, although faster in delivering results than the culture method, it is less sensitive than it is in adults, so that it doesn’t always identify every child with TB.

So it is an improvement, but it is not perfect. What we really need is a more affordable test that works on samples other than sputum. There is some ongoing research right now into using urine, for example, that could be really helpful, because it would get around all the problems associated with getting that sputum sample from the child.

But if diagnosed correctly the treatment for children with TB is effective?

Yes, there is treatment available and the good thing is that children do very well on treatment. In fact, children don’t generally suffer from the same degree of side effects from the medications that adults do. However, the length of treatment is still very long—six months for drug-sensitive TB and up to two years for drug-resistant TB—and can involve taking a lot of tablets, especially for drug-resistant TB.

In addition, there are no drugs to treat drug-resistant TB that are tailored directly for children, which means caregivers have to break adult-formulated tablets into small pieces to reach the right dosage for a child. It’s certainly not ideal and we need to see more drugs developed that are adapted to children’s needs. But we should emphasise again, that you can treat children with the existing medicines and they do get cured!

On a program level, what could be done to improve treatment for children?

A lot of programs don’t even include children, and this needs to stop. I think the important thing is to counter the feeling of fear around treating children with TB because people think there are no tests or treatments that work.

But that just isn’t true. There is enough evidence and tools available for children now so that they can systematically be included in TB programs. One important thing would be to link in with the pediatric and HIV services, because often children may be seeing doctors in these services who are not as sensitized to the symptoms of TB, and diagnosis is delayed.

We need doctors to think TB. When an adult comes to a clinic with their child and the child is there during the consultation sitting on their knee, the doctors need to be thinking, “Does that child have TB? Is there anything I can do to prevent that child from developing TB or treating its TB before it becomes a problem?”

On an international level, what needs to happen to improve the situation of TB and children?

The most important thing immediately is to improve TB treatment that is available right now.

For children with drug-sensitive TB, this means getting a new fixed-dose combination—when different drugs are combined into one pill—developed, because the World Health Organization revised its dosage recommendations in 2009, so we need a pill that follows that advice. Having a three-in-one or a four-in-one pill will reduce the number of pills a child has to take and also make administering the treatment easier for caregivers, whether medical staff or relatives.

For those children with drug-resistant forms of TB, we need to push for the development of child-adapted and formulated drugs—also in fixed-dose combinations—and try to find a way to get rid of the need to use injectable drugs.