Pediatric TB: "This Illness is Curable and We Can Defeat It!" 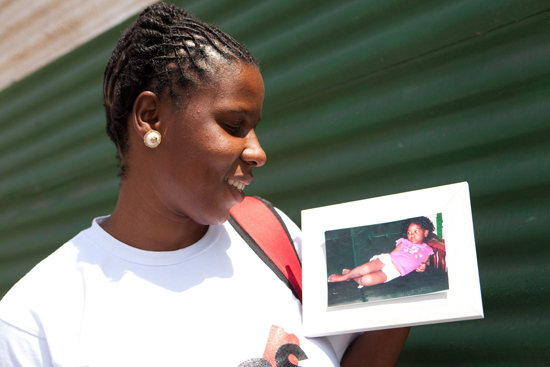 Busi holding a photo of her daughter.

Busi recalls the complexity of the treatment her daughter had to undergo—both the number of medicines that had to be taken daily and the fact that there are no existing drugs currently available that are formulated specifically for children with drug-resistant TB.

“My daughter was receiving one drug through an injection and also a lot of other drugs in tablet form daily,” he mother recalls. “It was even more difficult because, for the drugs, there were none in the measurements just for kids; but you need to measure out the amount of medicines you give a child according to their weight. So we had to break one of the tablets into quarters. That’s as exact as you can get.”

Once the tablets were crushed, there were still a lot of challenges involved in administering the medicines to the baby. Busi’s daughter was the youngest child ever treated for the illness in the hospital.

“It’s so difficult with such a young baby,” Busi says. “They are still teething, and so they are in pain and they don’t want to eat. Then if you force her to drink the crushed tablet in the milk, because she needs to have her drugs, she’s going to vomit. She was getting the same side effects as me because we were on the same drugs and that made her vomit. As a mother, you feel really caught in the middle. It was not good at all.”

Soon after, Othandwayo was transferred to Brooklyn Chest hospital, where she was hospitalized for seven months. Busi says that other children at the hospital experienced many of the same difficulties with their treatment, which their reactions illustrated. “The kids in the pediatric ward knew the sound of the treatment trolley. They could tell the difference between the sound of the trolley carrying food, and the trolley that carried the medicine. If it was food, they would get excited and start to play. But if it was the trolley for drugs, they started to cry. It’s so terrible. It was amazing, because they were all so young—under one year old! But they could still tell the difference between the trolleys.”

Her daughter’s experiences have made Busi a firm believer in the urgent need for improvements in the medicines available for children with drug-resistant TB: “If we could get a number of the medicines at least combined together into one tablet as a fixed-dose combination, that would really help. And if they could make the medicines in a syrup form that is tastier—instead of having to grind pills up and put them in water, this would also make things a lot easier for us.”

The good news is that eventually both Busi and her daughter were cured of the illness and are doing well. Busi continues to live and work in Khayelitsha, and her daughter has moved to the Eastern Cape to live with her grandmother and go to school there. Busi has this to say to the parents of any child ill with drug-resistant TB:

“I’ve got just one message: the child must adhere to the treatment, they must keep the doctor’s appointments, because TB is curable. If they don’t give the child the drugs, they’re damaging the child’s lungs and it will be difficult to grow up with damaged lungs.”

Lastly, she adds: “Parents should know that this illness is curable and we can defeat it. My daughter is six years old now and is doing fine.”