"People Are Dying in Unacceptable Numbers in Central African Republic"

Dr. Unni Karunakara discusses the state of chronic medical emergency in Central African Republic, calling on the government and international organizations to commit to the fight against treatable diseases. 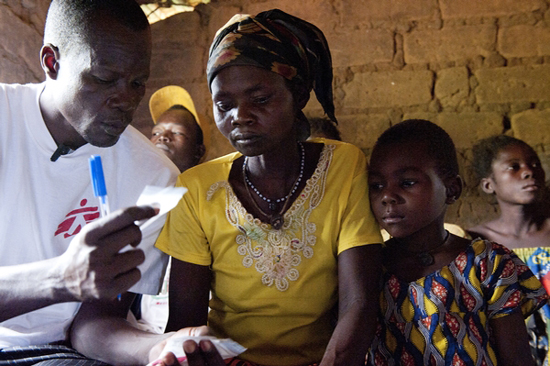 Isabelle and her daughter Nicole, both of whom suffer from malaria, receive treatment at an MSF facility. 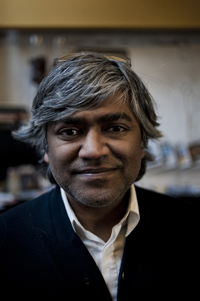 After a decade of political violence, displacement, and insecurity caused by rampant lawlessnes and clashes between rebel groups and government forces, many thousands of people in Central African Republic (CAR) are vulnerable to disease and have little access to health services. Despite existing far from the international spotlight, the country is in a state of chronic medical emergency.

On July 25, 2012, Doctors Without Borders/Médecins Sans Frontières (MSF) international president Dr. Unni Karunakara traveled to Bangui, the capital of CAR, to meet with President Francois Bozizé, Minister of Health Jean-Michel Mandaba, and various international organisations to discuss how greater investment can be mobilized to improve the country’s failing health care system. He also visited a hospital managed by MSF in partnership with the government in Paoua, in the country’s northwest. Dr. Karunakara’s visit was part of MSF’s long-term efforts to bring attention to the plight of people in CAR, and followed the release of our report, A State of Silent Crisis, at the end of 2011.

What are the most pressing problems in CAR?

MSF mortality surveys in CAR show alarming rates of death comparable to some of the world’s worst crises. MSF has conducted five separate mortality surveys in the past year and all the results have been very worrying. Our newest mortality survey, carried out this spring in northwest CAR, shows children urgently need better access to health care. Of those children who died before their fifth birthday, 60 percent were found to have died at home, while 13 percent died on the journey to hospital.

There is also a massive prevalence of treatable diseases such as malaria, HIV/AIDS, tuberculosis, and large numbers of deaths. Every person in the country has an episode of malaria at least once a year. Malaria is the number one killer and the greatest single cause of death amongst hospital patients. In early July, at the peak of the malaria season, CAR was experiencing a partial—and close to total—stock rupture of antimalarial drugs.

What are the causes of this health emergency?

First, there is limited access to health care. Human resources are extremely limited and skills are rare. The country has a very small number of specialist physicians, and the total number of doctors in the country is estimated at 300—for a population of approximately five million. Most of them are in the capital, Bangui, and many of them are unemployed. Nearly every medical service has to be paid for out of the patient’s own pocket, so most people seeking treatment do not go to a health center.

Secondly, the health care system is failing to meet the needs of the country’s citizens. Despite its best efforts, the Ministry of Health has a very weak presence outside the capital. Few health facilities operate. There are very frequent ruptures of essential medicines. We don’t know the full extent of the health problems of the country simply because many figures are not collected.

And finally, commitment to health is wanting. The government has not met its commitment to the Abuja Declaration to allocate 15 percent of government spending to health. At the moment it is closer to 10 percent—and even much of that is never disbursed or spent. International players have also been reducing their funding to health in CAR and this is unacceptable.

What was the focus of your discussion with the president and the minister of health?

Much of our discussion focused on malaria, which in CAR is “holoendemic”—meaning, essentially, that every single person gets infected with it at least once each year. It is the major cause of illness— in our own facilities, it accounts for just under half of all consultations. And it is the single greatest cause of death, especially among young children.

We have all the necessary means at our disposal—there are rapid diagnostic tests allowing the disease to be spotted quickly and easily; there are medicines which are effective, easy to take, and relatively inexpensive; and there are bed nets, treated with long-lasting insecticide, which can prevent infection altogether. We also know that an approach using local people living in the community to diagnose and treat the fever could offer a cure even in the remotest village. And yet, in the month before I arrived, there was a near-total rupture in medicines—the government had no antimalarial medicines available at all in its facilities. Even worse, this happened in the middle of the malaria season, when caseloads increase by at least 50 percent.

In 2011, MSF treated more than 243,000 people in CAR for malaria, and in the first half of 2012 we have already seen 121,410 malaria patients. In discussions with both the President and with international agencies in CAR we stressed that the fight against malaria must be a top health priority in the country. A focused and well-managed national malaria program will not only bring down mortality but also create a cadre of health workers who can take on other health tasks in the future. We believe that holding a regular roundtable, chaired by the president or the prime minister, with the major players in the fight against malaria (the Ministry of Public Health and Population, UN agencies, non-governmental organizations, and international donors) would achieve positive results quickly. We are also calling for more international investment in the fight against the disease, which would not only reduce mortality due to malaria and other causes of fever, but also overall infant mortality in the country. It is also the responsibility of the international community, including the Global Fund, UN agencies, and international NGOs, to ensure that no ruptures of drugs, mosquito nets, or diagnostic tests occur during the malaria season.

MSF has been working in CAR since 1997, and currently runs projects in five of the country’s 17 prefectures, mostly, but not only, in the country’s more unstable borders. We run projects in Carnot in Mambéré-Kadéï; Paoua in Ouham-Pendé; Boguila, Kabo, and Batangafo in Ouham; Ndele in Bamingui-Bangoran; and Zémio in Haut Mboumou.