MSF is working to assist some 12,000 Sudanese refugees displaced by violence in Ethiopia's Bambasi refugee camp. 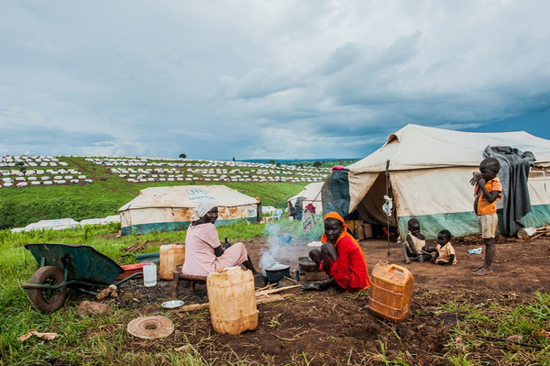 Sudanese refugees cook outside their tent in Bambasi camp.

More than 2,000 white tents line the green hills near the village of Bambasi, in western Ethiopia. Since July, they have been home to 12,000 Sudanese refugees who fled their homeland and are now taking refuge from conflict in a camp established by the Ethiopian authorities and the Office of the United Nations High Commissioner for Refugees (UNHCR).

“I left Sudan with my husband and our eight children last year when the war reached our village, Qeissan,” says a 30-year-old woman named Jamila. “The Sudanese air force bombed us before troops attacked on the ground. Many people, including my older brother, were massacred.”

The comprehensive peace agreement signed in January 2005 between the Sudan People's Liberation Movement (SPLM) and the Sudanese government was supposed to provide more autonomy for the regions of South Kordofan and Blue Nile. That never happened, and the conflict worsened after South Sudan became independent in July 2011. More than 200,000 Sudanese have since fled to South Sudan or Ethiopia, where they are currently living in refugee camps reliant on humanitarian assistance.

On the Ethiopian side approximately 15,000 refugees were first hosted in the Ad-Damazin transit center, about 12 miles from the Sudanese border. “The few accounts available from this camp reported an insufficient level of assistance in terms of water supply and health care,” says Duncan McLean, MSF program manager. “For months we asked the Ethiopian government for the authorization to intervene in Ad-Damazin, to no avail.”

A man named Jamal says, “I first spent seven months in the Ad-Damazin transit camp before the Ethiopians ordered us to leave at the end of April because we were too close to the border. But some refugees refused to move and torched the office of the Ethiopian authorities. As a consequence, food distributions were suspended for over two months.”

Some of the refugees, such as those with cattle or former SPLM fighters, wanted to remain close to the border with Sudan. Others refused to leave Ad-Damazin because of the gold-mining opportunities nearby. This was only a portion of the population, however; it was the others, more especially the younger children, who felt the impact of the interruption of aid most acutely, particularly in terms of their nutritional status.

"When refugees started to be transferred to the new camp in Bambasi mid-June, nearly 25 percent of the children under five years of age were suffering from acute malnutrition," recalls McLean. "After a vaccination campaign against measles, our teams opened a therapeutic feeding center and treated more than 400 severely malnourished children over the summer. MSF also distributes supplementary food to the most vulnerable, such as pregnant women and young children.”

Ad-Damazin camp is now closed. Around 3,000 refugees did not go to Bambasi. Some likely chose to return to Sudan, while others are probably still wandering along the border.

The flow of new arrivals has decreased significantly in Bambasi. Many have built traditional huts, called tukuls, besides the UNHCR tents. A market emerged within the camp where the refugees trade with local Ethiopian communities. According to a young man named Bilal, who arrived in Bambasi a month ago with 15 family members, “The camp is much better than what we had heard, although we’d like to receive more food and material. Our children also need education. Most of us hope to return to Sudan but we first have to wait here for peace.”