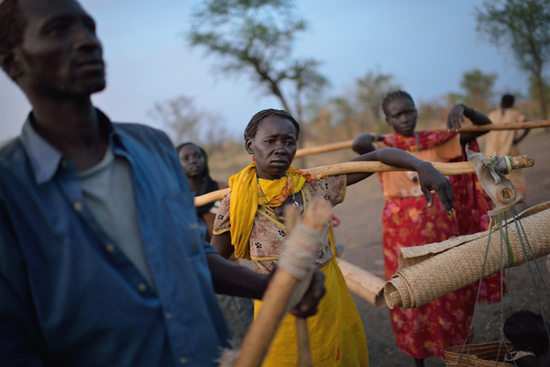 Halima Atayp of Jam village has been walking for 20 days with her seven-month-old baby and extended family. 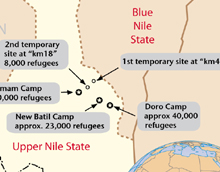 More than 100,000 people who have fled violence in Sudan’s Blue Nile State are struggling to survive in an inhospitable stretch of land in South Sudan, where infrastructure, health care resources, and water capacity are extremely limited, and where they are now wholly dependent on humanitarian agencies.

In Maban County, rains slowed the planned relocation of approximately 12,000 refugees from a transit site known as “KM18” to the Jamam transit camp and then onwards to Batil camp. “They need to get down to Jamam before the roads get completely closed with the rain,” said MSF health advisor Lauren Cooney.

Resources—water in particular—are stretched extremely thin in all locations, but KM18 is of particular concern because its water supply is dwindling faster than refugees can be relocated.

Doctors Without Borders/Médecins Sans Frontières (MSF) is assisting refugees in several locations in the area and is finalizing the establishment of its third field hospital in the camps—this one in Batil—in the coming days.

MSF medical coordinator Vanessa Cramond describes the experience of a young child who made the journey by truck from KM18 to the transit site near Jamam.

"It was late in the afternoon, after probably several thousand refugees had already arrived to Transit 3, and a translator and I were just walking around, trying to eyeball a few families just to see how they were doing. It was an opportunity to remind them that they can come tomorrow to be seen if [their situation] is not urgent and also to just pick up anyone who’s not doing so well.

My translator, James, and I got to one family and found a child. Often you have to uncover the kids to see their faces. We found a small child, around five months of age. He was in serious respiratory distress, was semi-conscious, and was seizing. He was really hot to the touch. It took us a little while to convince the family to come with us to a makeshift clinic that we had established in the area, because of the concern over being separated. But we finally managed to get her [the mother] in an ambulance and we drove them to our clinic where we were able to stabilize the child a little bit more.

He had a really high fever and severe pneumonia. We managed to stop the seizures and to rehydrate him and then transfer him to the hospital, where hopefully he can be treated with antibiotics and his fever will go down. We’ll see how he goes in the next few days, but he’s a very, very sick small child, and given his critical condition this afternoon, the next few days will really determine whether or not he will make it."

Because of the lack of agencies addressing water and sanitation issues in the area, MSF is also going beyond its primary medical mission by establishing water and rehydration points, and by drilling boreholes for water extraction in several spots along the route between the border and Jamam. The points, set up every four kilometres (2.5 miles), also provide oral rehydration salts in order to treat dehydration.

“It's not certain that all of them will be able to come out by truck or tractor, so we're assuming that some people might have to walk,” said Cooney. “We want to make sure there's no risk of them getting dehydrated on the way. We hope we can make sure everyone arrives in the best state possible at the transit site in Jamam."

However, the rains have also severely affected living conditions for those already in Jamam and Batil camps. The toll on the refugees is evident in testimonies gathered at the camps. While further study is needed, initial mortality statistics recorded in Jamam camp were above the emergency threshold.

While other agencies have to a degree stepped up their response in Jamam camp, the aid provided is still not commensurate with the needs on the ground, especially regarding water provision, appropriate shelter, non-food item distributions, and urgently needed road work in the area.

In light of this dire situation, MSF is calling for the immediate provision of sufficient quantities of treated water, particularly in Jamam and Batil camps and at KM18. Refugees gathered at KM18 also need to be relocated to a suitable location with clean water, food, and shelter. Services in Batil camp need to be scaled up to meet the needs of relocated refugees. The roads that provide access to the refugee camps are also in urgent need of maintenance, as the rainy season will otherwise make access impossible. Concrete plans and appropriate resources are also necessary for the inevitable arrival of more refugees.