Rohingya refugees in Bangladesh: "Bracing for the worst" as the rainy season approaches

As the mass exodus of Rohingya people fleeing violence and persecution in Myanmar’s Rakhine state continues, refugee camps across the border in Bangladesh are struggling to provide the necessary space and resources to new arrivals. The already dire situation is further complicated by the impending rainy season, which stands to cause catastrophic flooding and threaten access to safe water and sanitation services throughout the sprawling camps.

In Camp 17, a new expansion to the massive Kutupalong-Balukhali megacamp in Bangladesh’s Cox’s Bazar district, 120 acres have been set aside to house both new arrivals from Myanmar and refugees from other areas of the camp in advance of potential flooding. But even this measure won't be enough to meet the needs. “There just isn’t enough land available; the camp is too crowded,” said Francesco Segoni, emergency coordinator for Doctors Without Borders/Médecins Sans Frontières (MSF). “Where relocation is already happening, sanitation and hygiene conditions are below the minimum standards. When the rain comes, not only do we anticipate flooding and landslides, but also an exponential increase in the risk of a [disease] outbreak. Latrines will go underwater; contamination seems inevitable. We are bracing for the worst.”

Around 200,000 people in the camps are in regions at risk of flooding, and 15 percent of the camp’s total area could flood, according to the United Nations refugee agency, UNHCR. While the Bangladeshi government plans to make some 680 additional acres available for refugee housing at an unknown point in the future, even this will be well below the space needed to safely host the number of people in the area. UNHCR estimates that 10 acres can accommodate 10,000 people.

In addition to flooding living quarters, the rains could also facilitate the spread of deadly waterborne diseases like cholera in the camps. MSF is currently preparing for potential outbreaks linked to the rains, in addition to increasing our capacity to cope with the everyday medical emergencies and ongoing needs within the camp.

To mitigate the effects of the rain, there is an urgent need to make safe water available in the camps, especially in newly designated expansion areas. “The provision of clean drinking water is an absolute priority in the camp: it’s as much a lifesaving activity as our medical work,” said Segoni. “We are racing against time to reach out to new areas and keep up with the ever-evolving context.” 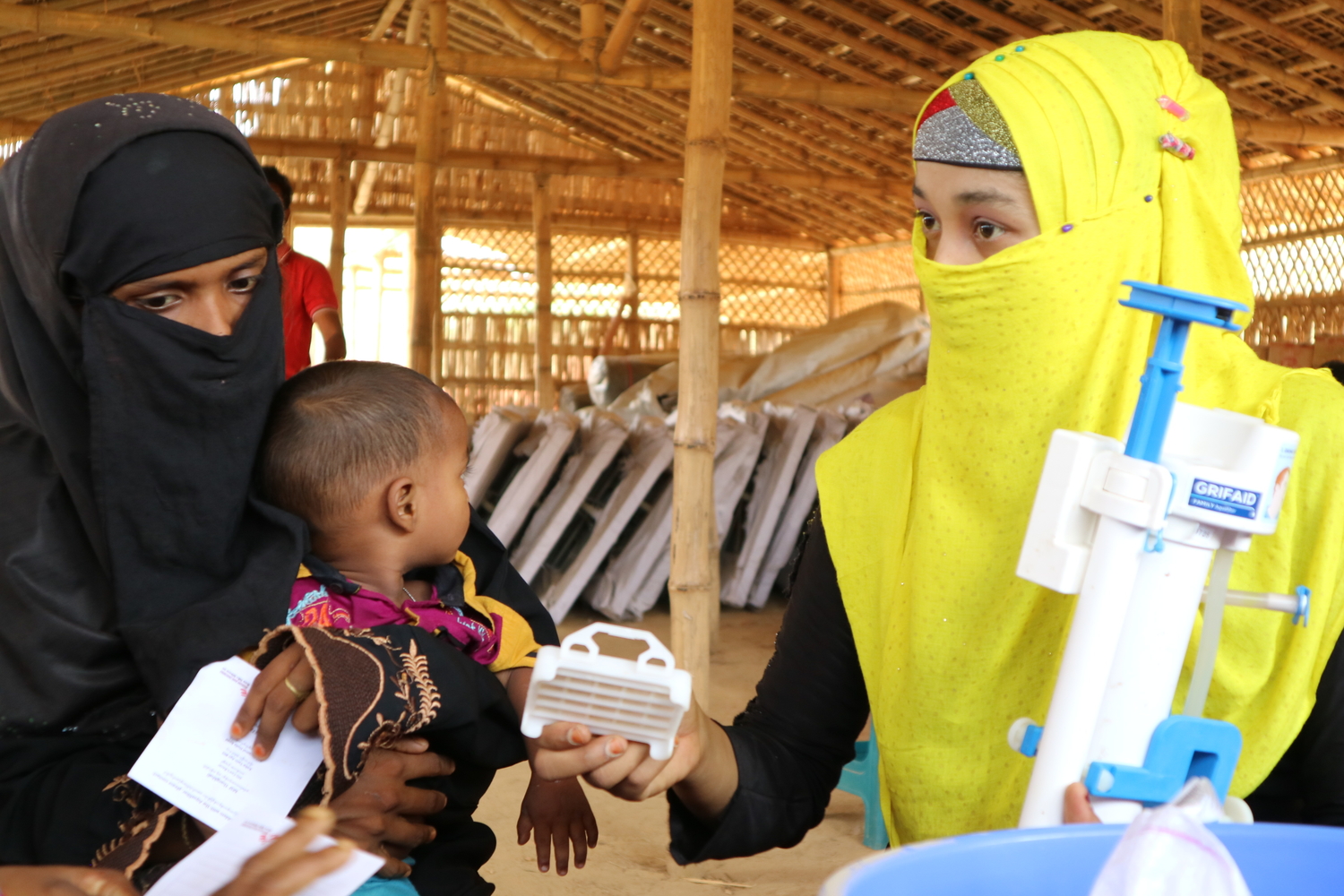 To date, MSF has built hundreds of hand pump wells and drilled 25 deep water boreholes in the ground equipped with motorized pumps to help ensure that people have access to clean water. On a hot and humid day in late April, a water network distribution supervisor for MSF, Arafat Hosen, and a crew of 12 volunteers installed a motorized pump in Camp 17 for a well that’s 120 feet deep. They worked through one of the early rainy season downpours to successfully install the pump that will provide water to the existing local camp community and those to come. It is hoped that each deep well like this one could supply five liters of drinkable water per person per day for up to 4,000 refugees.

“We were successful,” Hosen said. “But there is still much that needs to be done, like installing a network, and there are other boreholes that need pumps, too.” Coupled with the borehole drilling and water pump installation, MSF is also distributing water filters to the most vulnerable patients, such as mothers with children under five years old and pregnant women. More than 600 have already been given to residents, and thousands more of these simple devices will be distributed.

“We train local people to instruct the recipients on use and maintenance, as well as following up after one week, one month, and three months,” said Halal Uddine, MSF’s aquafilter supervisor, who hails from a Bangladeshi community near the camp. “So far, people have been really pleased. [The filters] are used by families and often shared with neighbors. It’s important, as there is such a shortage of safe water.”

MSF is also expanding its medical facilities in anticipation of the needs. In addition to MSF’s four hospitals, three primary health centers, and 10 health posts in the camps, a new 100-bed hospital was opened on the edge of Camp 17 in April, equipped with a 50-bed isolation unit. Earlier in February, MSF opened a 74-bed hospital at Goyalmara and a new maternity unit was inaugurated at the Kutupalong clinic in early April. At the Rubber Garden hospital, which currently has 30 beds for patients with diphtheria, MSF is increasing the capacity of the facility to include 100 beds for patients with acute watery diarrhea as part of the emergency preparedness plans.