Rohingya Refugees in Bangladesh: Voices from the Violence

Since August 25 more than 600,000 Rohingya people have fled targeted violence in Myanmar and sought safety across the border in Bangladesh, bringing the total of Rohingya refugees in that country to nearly a million. The new arrivals share horrific stories with Doctors Without Borders/Médecins Sans Frontières (MSF) teams about their villages being raided and burned and of widespread violence against civilians. They carry the scars from bullet, blast, and stab wounds, severe burns, and sexual violence. 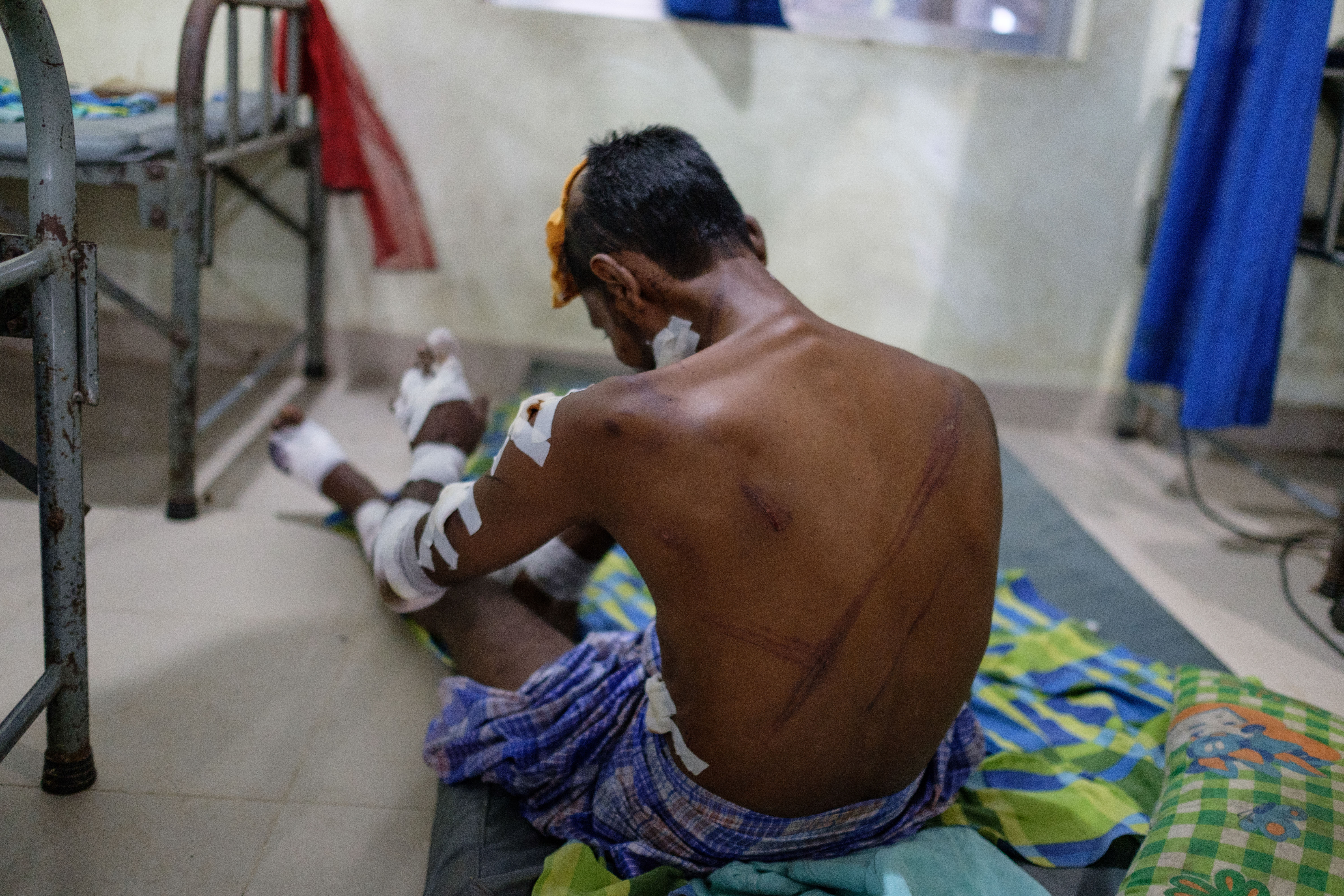 "On the afternoon of August 30 the military came to our village. The Mogh Ukhatta [Rakhine village chairman] told us not to flee; that the military were only coming to check for Al Yaqin [the previous name of the Arakan Rohingya Salvation Army, known as ARSA]. 'They won’t harm you if you all gather in one place and cooperate with the authorities,' he said. We believed him and all went beside the canal—women, men, children, and the elderly. The military came in the hundreds. First they selected men from the crowd and told them to lie by the canal, face down to the ground. Their bodies were in the water. Then the military stabbed them in the back many times. I saw with my own eyes how they killed my husband. He was a farmer, nothing more. They burned all the bodies together.

Seeing this killing, some youths in the crowd tried to run. They only managed to get up to the village graveyard. They were shot from behind. My son and nephew, both 12 years old, were there. They are dead too. My father was also shot dead.

The military then took groups of women to the houses and stabbed them and beat them. Some died. One soldier stabbed me in my throat and chin. One hit me on my hand. Somehow I managed to get out of the house and went into the bush. Then the military torched the house. At night, the military left and I went inside the forest. There I found four women from my village; they were also injured and bleeding. Together, after three days of walking, we got into a boat to Bangladesh. I can’t remember the date clearly, everything seems so blurry to me. I lost my six children; three girls, three boys. The youngest was three months old. When I was fleeing, I took a baby the size of my own baby. I thought it was mine. After a while I realized that it wasn’t my baby, it was another dead baby. Its tummy had been slashed open.

Two weeks earlier, the military along with the Rakhine Village chairman had been searching for members of ARSA. But there were none. The previous day, they all left the country and came to Bangladesh; they had moved their family in advance. We thought that we wouldn’t face any problems. My suffering is because of Al Yaqin. They are not able to bring any good for us. I lost my husband and six children, there is nothing left of me. I am not alive, though it seems like I am."

—Female patient from Maungdaw, treated by MSF for violence-related injuries. 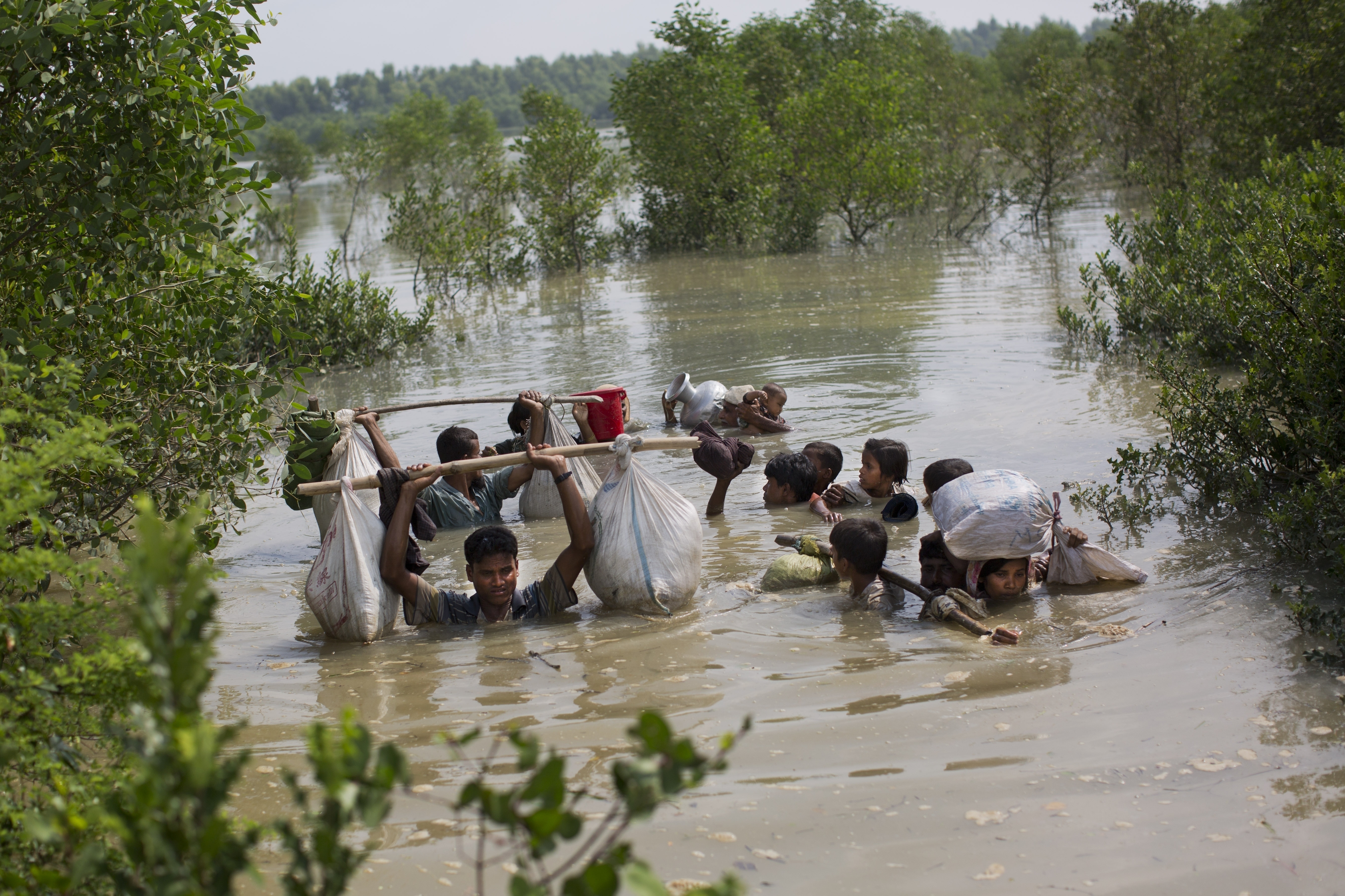 MSF clinics and hospitals in Bangladesh's Cox’s Bazar district have recorded a sharp increase in the number of people seeking medical attention. Between August 25 and October 7, MSF teams treated over 30,000 patients. With very limited access to medical care in Myanmar, and after a long, perilous journey on foot to Bangladesh, many of the new arrivals have serious medical needs, including severely infected wounds, acute watery diarrhea, pneumonia, malnutrition, suspected measles, or advanced obstetric complications.

"People were arriving in a horrific state. Some people said they had been trapped in houses that were set on fire. We treated unaccompanied children who had lost their families. One tiny neonatal baby was brought in by a woman who had found it in the grass at the border. She’s now caring for the child in addition to her own children. We treated a young girl with a head wound; an hour later her mother was admitted with severe burns. They said they were the only survivors from their family."

"I’ve heard the most horrific stories from women who have lost their husbands just trying to get here. They spend days walking with their young children along crowded roads with cars coming in either direction. Some children have been struck and killed by cars. And in an instant, that secure future they were trying to build for their family vanishes. That’s a tragedy at an individual level. Multiply stories like that by 500,000 and you start to understand how harrowing this situation is."

"On August 21 about 30 soldiers came and burned our house to the ground, as well as nine other houses. My son was inside the house sleeping. I was out looking for two of my cows and my goats that had been missing since the day before. It was morning. When I went back I saw fires in the other houses and then realized the rooftop of my house was on fire too. I heard my son screaming inside and I rescued him with a blanket. He was almost on fire by the time I dragged him out. Two other children burned inside their houses."

—Mother of a 25-year-old patient being treated for burns 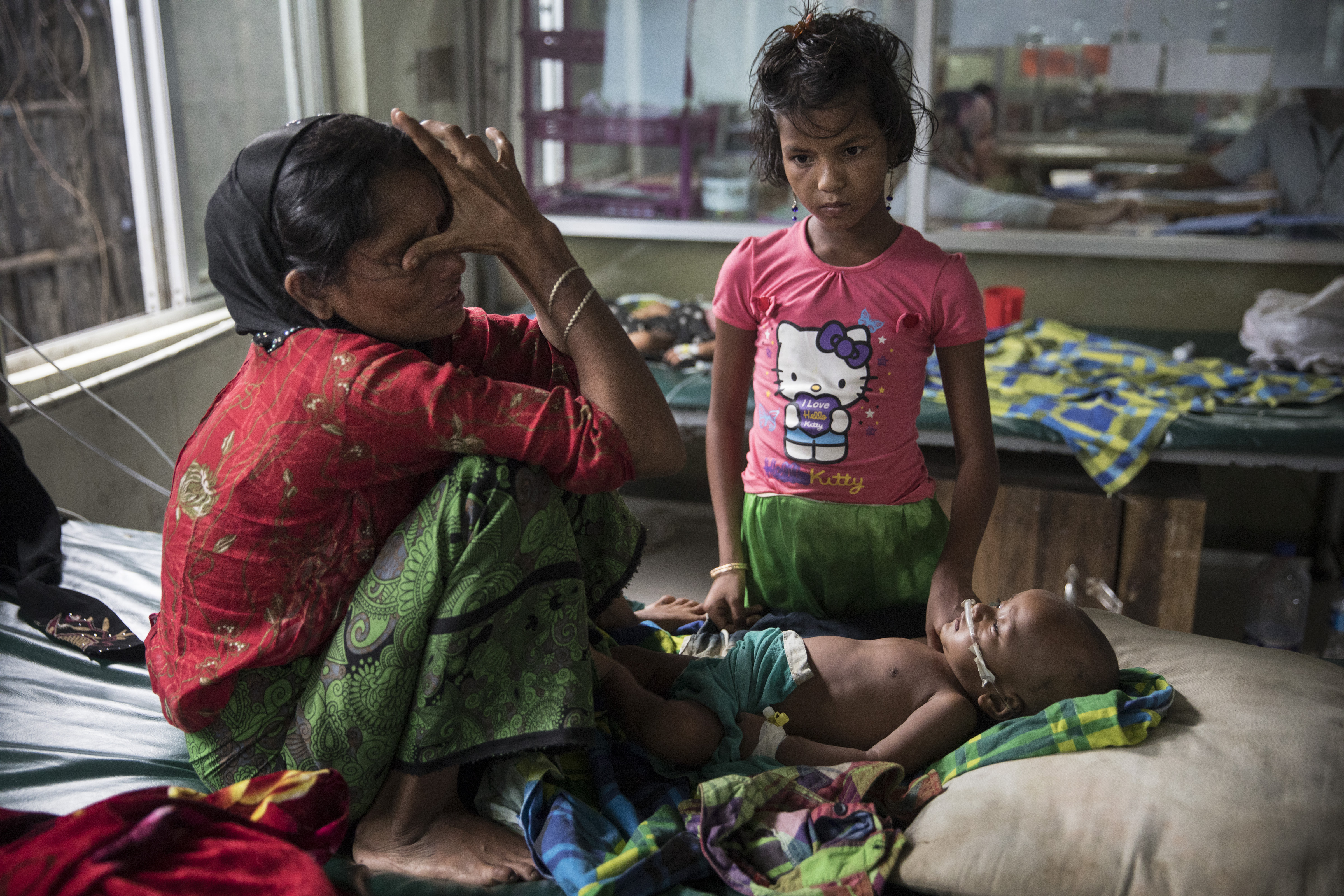 Even prior to this most recent influx, Rohingya refugees in Bangladesh lived in highly precarious conditions. Now, the enormous makeshift settlements are full to bursting, with people living in unsafe, overcrowded, and unhygienic conditions with little protection from the elements, no toilets, and hardly any access to clean drinking water.

While some assistance has been provided, the scale of the emergency and huge number of new refugees means that the vast majority of people have not received assistance. The extremely precarious conditions pose a serious health risk—if a disease outbreak occurs the consequences could be catastrophic.

Access to food is still a major problem, with many people only receiving one meal of rice a day. The absence of roads into the settlements means that aid is not reaching many refugees. MSF is scaling up operations as fast as it can, but a more robust response is badly needed.

MSF has been working in Rakhine state, Myanmar, for the past 25 years, but is currently unable to reach Rohingya people with the urgent medical care required. In September MSF called on the government of Myanmar to grant independent international humanitarian organisations immediate and unfettered access to northern Rakhine state in order to respond to massive humanitarian needs. The ability to reach and support Rohingya people in Rakhine State has only further diminished since then, and refugees continue to cross into Bangladesh with reports of continuing violence.

Myanmar's Rohingya ethnic minority members walk through rice fields after crossing over to the Bangladesh side of the border near Cox's Bazar's Teknaf area, Friday, Sept. 1, 2017. Thousands of Rohingya Muslims are pouring into Bangladesh, part of an exodus of the beleaguered ethnic group from neighboring Myanmar that began when violence erupted there on August 25. Most of Myanmar's estimated one million Rohingya live in northern Rakhine state. They face severe persecution, with the government refusing to recognize them as a legitimate native ethnic minority, leaving them without citizenship and basic rights.
Bernat Armangue/AP Photo