?My grandson, he?s a warrior!? 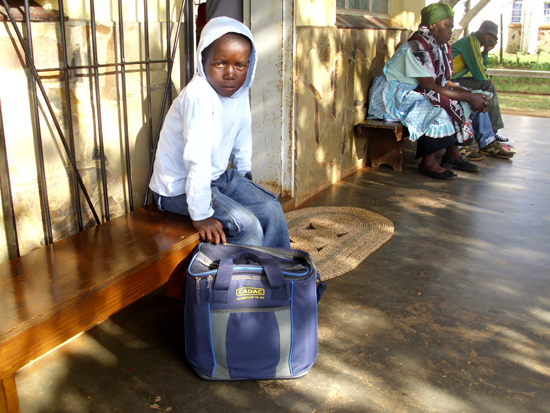 Senzo waits for his treatment for at the TB clinic in the Matsanjeni Health Zone.

Senzo is seven years old and lives with his grandmother in Mgazini, in the Shiselweni region of southwestern Swaziland. He is HIV-positive and has been on treatment for multidrug-resistant tuberculosis (MDR-TB) at Our Lady of Sorrows clinic in the Matsanjeni Health Zone for just over five months.

Every day, Senzo wakes up and walks to catch a bus to the clinic for his daily injection. The injection is part of the complicated two-year-long treatment for his drug-resistant form of TB. In addition to the injection, Senzo takes 14 pills each day. It’s not easy for him to swallow them all and some taste very bad.

"I hate the drugs, they have such a terrible smell and many are really big, too," he said. "I used to cry all the time when it was time to take one of those pills. The only reason I take them is because I want to get well."

The drugs can also have unpleasant side effects, such as nausea, vomiting, and diarrhea. This makes matters even worse for many children who sometimes find it hard to communicate their distress.

No Drugs Formulated For Children

Treating drug-resistant TB is complicated even when the patient is an adult. But an added complication for Senzo is that there are no drugs that are specifically formulated to treat children. Instead, caregivers have to work with adult formulations and adapt them by breaking them up.

This all makes it much more challenging as Senzo’s grandmother explained: “It is very difficult to break the drugs up. What I normally do is put the drugs on my chopping board one by one and chop them with my big knife. Some of the drugs have a very bad smell but I learned from the support group how to deal with that. So what I do is peel an orange and then squeeze the peels onto my grandson’s hand, put the drugs and down they go without a problem. Before I learned that, he used to vomit all the time.”

The length of the treatment—up to two years—its complexity, and the side effects all add up to a formidable challenge for both the child and the caregiver. Dr. Marcella Tomassi, a physician with Doctors Without Borders/Médecins Sans Frontières (MSF) who works with drug-resistant TB patients in Shiselweni Region, expresses the frustrations felt by many of those who are currently working to treat children with the disease.

“My dream for children with  drug-resistant TB would be to get rid of the daily injections," Dr. Tomassi said, "and have drugs available that are formulated specifically for children. Longer term, we need new strategies for treatment like a reduction in the length of the treatment that could make life so much easier for the children on treatment.”

The numbers of children currently receiving treatment for MDR-TB is quite low. One reason is that diagnosing the disease in children in the first place is difficult.

Patients have to cough up a sample of phlegm or sputum from deep inside their lungs—that is what is needed to carry out the diagnostic tests. But children often cannot do this; instead they spit out watery saliva. So medical staff have to use various methods to extract a good sample, said Yvonne Makwabarara, a nurse who treats drug-resistant TB patients at the clinic.

“It is difficult to collect sputum from children and we end up doing a gastric lavage," said Makwabarara. "That means basically putting a pipe down into the child’s stomach to extract the sputum. It’s irritating and sometimes it breaks the bond that has developed [between the child and the nurse].”

Even with this technique and others to induce sputum, many children will still be unable to produce a sample that gives a correct diagnosis, and that means they can go untreated. In fact, the multiple challenges of diagnosing and treating children with drug-resistant TB have added up to a situation where many children are simply not getting the treatment they urgently need. It’s a situation that needs to change.

Meanwhile, Senzo is determined finish his treatment so he can fulfil his own dreams to one day become a motor mechanic and support his grandmother who has so carefully looked after him. His grandmother, along with MSF caregivers and the members of the local support group, is determined to get Senzo through this difficult treatment. Together they make a great team.

“We still have a long way to go with my grandson," she said. "He is a warrior. We still have about 19 months before he completes treatment. Senzo is a clever boy when it comes to his treatment. He is the one who reminds me when the alarm goes off to take his medicines or when it’s the news on the radio—he is a responsible young boy.”