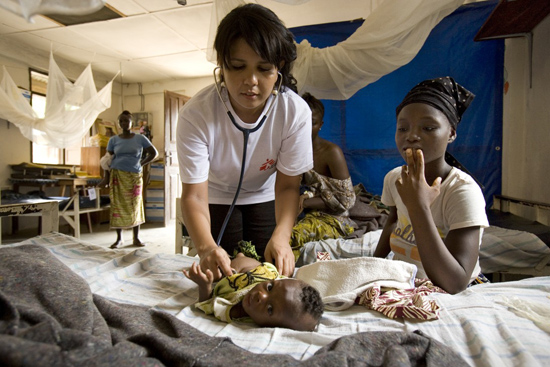 An MSF nurse checks on a child in Sierra Leone.

The narrow, dusty road that leads to the hospital run by Doctors Without Borders/Médecins Sans Frontières (MSF) in the tiny settlement of Gondama is little more than an uneven dirt track. Shimmering in the heat, it runs past a river in which dozens of men spend their days panning for diamonds. Hard work, but the faint hope of finding something is enticing enough to make it worthwhile to them, particularly in Sierra Leone, one of the world's poorest countries.

One in five children in Sierra Leone dies before reaching their fifth birthday. Many die from curable diseases, but in a land ravaged by civil war not long ago, there are far too few clinics, doctors, and drugs to go round.

The impact of the poverty becomes even more visible at the MSF hospital in Gondama. There is a boy in the intensive care unit (ICU) who is suffering from acute malaria. His pulse is racing, registering 176 beats per minute. His breathing is rapid and shallow. His eyes are half-open, frozen in an absent gaze. His exhausted mother presses a rag to his forehead to cool him down in the sweltering heat of the ICU. He receives drugs and blood transfusions, without which he would die, and a nurse regularly checks his pulse and breathing—there’s no electronic monitor—to make sure he is getting enough oxygen in his weakened state.

Doctors and nurses treat over 750 children every month at the hospital. More than half arrive having contracted Malaria, some of them suffering from an additional disease, such as meningitis or tuberculosis, as well. Often, their parents don't bring them to the hospital until the disease, or diseases, have reached advanced stages because they live far away and cannot afford public transport. “Sometimes when a child comes to us, I can see straight away that we’re just not going to be able to save them,” explains Eva Svensson, an MSF doctor from Sweden. “That’s the worst part of it.”

Malaria, which is hyperendemic in Sierra Leone, is a particular problem. Throughout the year, children run a high risk of contracting the disease, which causes severe anemia, rendering the body’s organs incapable of receiving sufficient amounts of oxygen.

The 215-bed hospital in Gondama has a pediatric unit and a feeding center where teams give the malnourished children high-calorie, mineral- and nutrient-rich therapeutic food. Many of these malnourished young patients are suffering from disease as well. The beds are pushed close together. So many children need treatment that some of them have to share a bed.

Three-year-old Ibrahim is another patient. “His mother brought him to us yesterday,” explains Felix Musung, a doctor from the Democratic Republic of the Congo. “Ibrahim has a high fever, is perspiring profusely, and I can tell just from looking at his eyes that he’s suffering from acute anemia. They’re so pale. We’ve given him a blood transfusion and some injections.” Yet Ibrahim’s anemia remains a source of concern for Felix, so much so that he gives the boy another transfusion that afternoon.

The next morning, Felix examines Ibrahim and the other children in the pediatric unit during his rounds.  “Every morning when I come onto the ward, the first thing I do is look to see how many children are receiving blood transfusions,” explains Musung. “Today there aren’t very many of them; most of the children are stable. It’s going to be a good day.”

Another positive sign: Ibrahim is showing signs of improvement. He’s strong enough to sit up in bed and eat. His mother is smiling. In another three days, he’ll be able to leave the hospital.

MSF is providing assistance in the districts of Bo and Pujehun in southeast Sierra Leone. Along with the hospital in Gondama, where many serious cases are treated, MSF also supports five government-run clinics in rural areas. Recently, it successfully lobbied for the introduction of a new national health policy that ensures children have access to life-saving medical treatment. As a result, in April, the government introduced free health care for pregnant women and children under five.

In some ways, Ibrahim's story is not unusual. Most of the children who receive treatment recover quickly; nine out of ten survive their illness. “It’s such a joy to see how the children get better with each passing day,” says Svensson. But they have to receive care before they can get better.