Somali and Ethiopian Migrants Face Violence in Waters Off Yemen 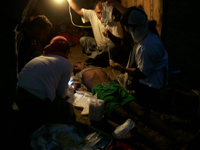 Madrid, June 19, 2008 — Thousands of Somalis and Ethiopians risk their lives every year to cross the Gulf of Aden to escape from conflict and extreme poverty. The trip is fraught with danger, as people are exposed to violence from smugglers and receive little assistance upon their arrival in Yemen. A new report published by the international medical humanitarian organization Doctors Without Borders/Médecins Sans Frontières (MSF), titled “No Choice,” documents the conditions of the perilous journey and calls for increased assistance for the thousands of refugees, asylum seekers, and migrants fleeing their home countries to Yemen.

Due to the escalation of conflict in Somalia and the drought affecting the Horn of Africa, the numbers of new arrivals are increasing. In 2007, according to the United Nations, 30,000 people embarked on the dangerous trip; during the first five months of 2008 over 20,000 arrived in Yemen. Many of them never made it.  In 2007 over 1,400 dead and missing people were reported; so far, in 2008, 400 people have not reached the shores of Yemen alive.

The report, released on the eve of World Refugee Day, is based on over 250 testimonies gathered by MSF teams in Yemen since September 2007. The refugees arrive exhausted, many of them sick and emotionally shattered. Boats of 8- to 10-meters, designed for 30 or 40 people at the most, are packed with over 100 passengers. People are forced to sit in the same position without moving during the two or three days of the journey and are, in most cases, deprived of water and food.

The smugglers are extremely brutal, beating anyone who dares to move.  Conditions are even worse for people stuck in the holds of the boat -- tiny, windowless spaces meant for storage. Twenty people or more are crowded in these spaces, literally sitting on top of each other. Conditions are so harsh that deaths during the trip were reported from one third of the boats. The main causes were severe beatings, lack of food and water, and suffocation from being in the hold. Several of those interviewed also reported cases in which the smugglers threw passengers, including children, overboard.

Landing on the Yemen coast is very dangerous.  To avoid being caught by the military, many boats arrive at night and do not come close to the shore. The smugglers force the passengers to jump into deep water. Many people drown; they cannot swim, are unable to move because of numbness, or are disoriented and cannot find the coast.

Most of those interviewed are aware of the risks, but told MSF that they had no choice, this being their only survival strategy to escape from violence and destitution. For those who reach the shores of Yemen after the perilous trip, their plight is not over. Yemen is a country with limited resources and assistance is scarce.

“To date, the humanitarian response has been inadequate,” said Alfonso Verdú, the MSF general coordinator in Yemen. “More international assistance is urgently needed and donor countries should commit themselves politically and financially. The response capacity of those who provide assistance to the refugees needs to be increased and more organizations should intervene.”

Doctors Without Borders/Médecins Sans Frontières opened a project on the southern coast of Yemen in September 2007 to provide medical, psychological, and humanitarian assistance to new arrivals. A mobile team provides first aid and assistance on the beach and MSF runs an emergency health center in the Ahwar Reception Center (ARC). In eight months, MSF has provided assistance to over 6,000 persons.