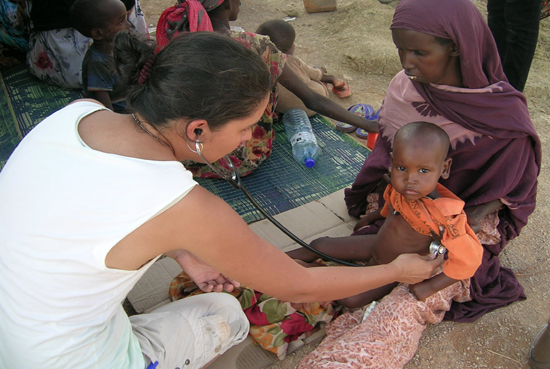 MSF staff attends to a child in Dolo Ado.

MSF has been providing care to more than 30,000 Somali refugees in Dolo Ado woreda, or administrative division, of the Liben zone, in the Somali region of Ethiopia, since February 2009. Ongoing violence and intolerable living conditions in Somalia drove them to make the difficult journey across the Ethiopian border. On their arrival at the Dolo Ado transit camp, they receive medical care before moving on to the Boqolmayo and Malkadida refugee camps, where MSF provides them with nutritional assistance. Here, MSF’s field coordinator in Ethiopia, Fréderic Maudoux, discusses their situation:

Why did MSF decide to intervene in this border region?

In 2009, we took part in a nutritional assessment in the refugee camps. The nutritional status of the under-fives in the newly-arrived Somali population was found to be alarming. So we saw the need to intervene, and to help the population by carrying out nutritional prevention activities, as well as by diagnosing and treating malnutrition. Since the very first months of 2010, we, together with the government organisation ARRA, have been carrying out activities at outpatient feeding centres at the Boqolmayo and Malkadida camps, where the Somali refugees are transferred after their stay at the makeshift camp of Dolo Ado, where they receive emergency medical care.

In Dolo Ado, we have opened a health center where we offer outpatient and emergency care to adults and children. We conduct active screening to detect malnutrition cases and we vaccinate children. We also provide support to the town’s health center, a service used not only by the refugees but also by the resident population of the area. We also refer patients in need of specialized hospital care.

Why are so many people fleeing Somalia?

Some people are the direct or indirect victims of violence. They have been injured, threatened or displaced from their homes. Their exact numbers are difficult to estimate. Others have left their country because of clashes between clans, or power struggles amongst extremist groups, or else they have left before becoming directly affected by the conflict. Many women are also seeking shelter in Ethiopia out of fear that armed groups operating in the area will forbid them to work, because they are the ones supporting their families and caring and feeding their children, having lost their husbands as a result of the war.

Can you describe their journey?

Most refugees are women and children. There are virtually no men. To get to Dolo Ado, they need to walk for most of a day, in difficult conditions, without enough food or shelter, and with very few belongings. Even though they may not have come far, some may have been on the move for weeks already, because armed groups may have intercepted them and tried to convince them not to leave the country. They are told that if they leave, they will never be able to return. Many of them travel at night, when it is easier to avoid the armed groups. But they all have a fear of being seen by armed groups.

What is the current situation in the refugee camps?

The number of asylum seekers arriving in the Ethiopian border town of Dolo Ado completely depends on the situation in Somalia. One night, it might be just 10 or 20 people, while on another up to 2,000 may arrive. The Dolo Ado transit camp has the capacity for 1,000 people. So when the incoming flow exceeds that, people are referred to the two other camps. Currently, there are nearly 17,000 people in Boqolmayo and nearly 15,000 in Malkadida. Water, latrines and showers have to be constantly adapted, which is challenging for the authorities running the camps, and families often have to share tents with other families.

What kind of medical problems are you seeing?

When they arrive, most of their medical problems are related to the long journey and its difficulties: diarrhea, skin infections, weakness due to lack of proper food and water, and so on.

How long do the refugees stay in these camps?

Some leave due to the crowded living conditions in the camps or because they have family and friends in the area that can help them. Others simply want to stay there temporarily. They want to be close to the border with Somalia, but not to go right back to where they used to live. So they stay around Dolo Ado or Dolo Bay. Everybody wants to stay on this side of the border with Ethiopia, because they feel protected by the increased presence of the Ethiopian army in the border area.

Can you describe the activities carried out by MSF in the area?

We started working in the transit camp more than a year ago, and we are trying to provide health care to all refugees crossing the border who need it. Nutritional activities have been running for more than six months. We would like to scale up our activities to include secondary health care and strengthen the referrals for lifesaving and specialized-care purposes.

The medical activities we are carrying out are outpatient consultations, measles vaccinations for children under 15, hospitalization and outpatient care, and lifesaving referrals.

When you talk to the refugees, they tell you that the reason they fled to Ethiopia is because they needed to earn a living in peace. We hope to be able to continue helping them for as long as their living conditions are difficult. We feel that there is a need for continued support to these people for as long as the influx continues.

Refugees, in Their Own Words:

"I come from Bula Awah, a place close to the border with Kenya," said one woman. "My husband was captured by an armed group three months ago. I don’t know whether he is dead or alive. I live with my grandson. I don’t want to return to Somalia. It is dangerous. I am tired of war. We cannot live there. My daughter, my grandson’s mother, was transferred to the Boqolmayo refugee camp."

Another woman, also from Bula Awah, said, "My husband and I are farmers. We have six children. The eldest has stayed back in Somalia looking after his father who has a leg injury and could not travel. I don’t know when they will come. My children and I don’t want to go to Kenyan refugee camps because we feel it is very dangerous. Here we are not afraid of dying. We travelled on a donkey until it got exhausted, and then we started walking. We walked until we came across a vehicle that gave us a lift in exchange for money."