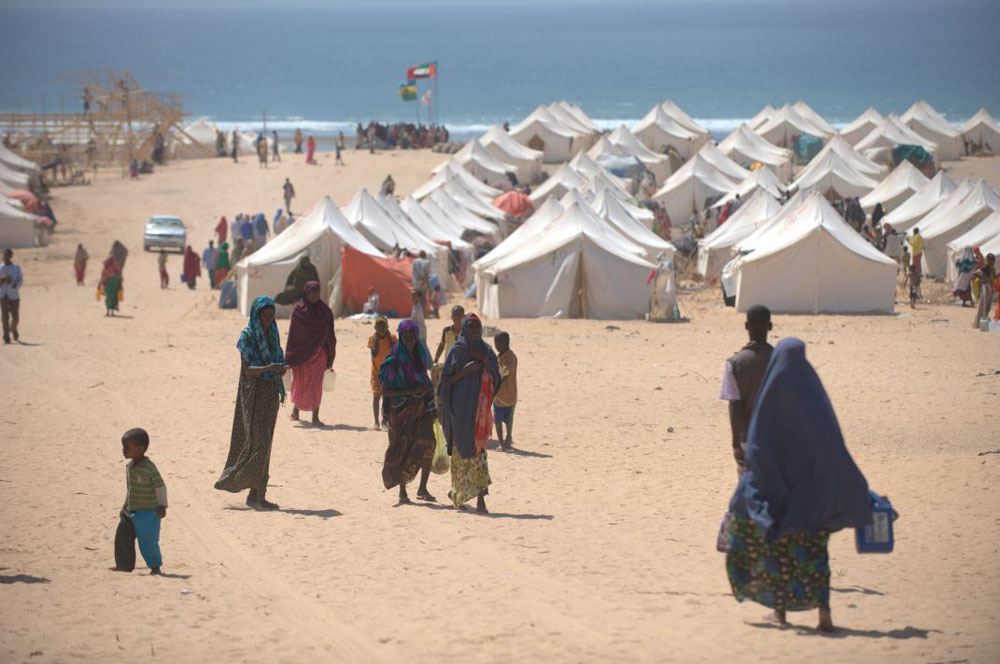 One of the many displacement camps in Mogadishu.

Ravaged by 20 years of civil war, Mogadishu, Somalia's capital, has experienced an influx of displaced persons in the last three months. Providing aid to people who have fled hunger and fighting is a constant challenge in this chaotic urban setting.

Since July, more than 150,000 Somalis have left the provinces of the country's central region—Bay, Bakool, Hiran, Lower and Middle Shabelle—to seek refuge in Mogadishu. This large-scale population displacement is the result of poor agricultural production, loss of livestock because of drought, increasing prices, and perpetual insecurity.

Deka, a 26 year-old woman, left Kuntawarey district in Lower Shabelle after her cows died. "I traveled with my son on the top of a truck for two days to reach Mogadishu and find my cousins in the Barwako camp," she says. "People from MSF told me that my son was suffering from malnutrition, so I went with them to their hospital. My son is starting to get better, and I am, too, because I am fed here."

This kind of exodus poses a host of health problems. But measles currently is the greatest threat and Doctors Without Borders/Médecins Sans Frontières (MSF) has mobilized to halt the spread of a disease that is particularly fatal for children. Since early August, MSF has vaccinated more than 40,000 children under the age of 15. "That sounds like a lot, but if we are to have any hope of stopping the epidemic, we'd have to vaccinate at least 10 times that number," explains MSF medical manager, Dr. Andrias Karel Keiluhu. "Logistical and security constraints limit our goals."

Humanitarian aid organizations are struggling to access the most affected areas because of the ongoing conflict between the Transitional Federal Government (TFG), which is assisted by troops from the African Union Mission in Somalia (AMISOM), and the armed Al-Shabaab group. That is why Somalis are migrating in such great numbers, hoping to find aid in Kenya, Ethiopia and the Somali capital.

Like Deka, most of the new arrivals move into existing camps, swelling their already sizable populations. Others have settled in the few unoccupied spots remaining in the city. Their makeshift housing, assembled from bits of wood and plastic, is scattered among the ruins of the capital. More than 200 sites of varying size have been identified.

Deploying aid in this patchwork of shantytowns is particularly complicated. The camps empty out during the day as residents leave in search of food. "Food distributions are still irregular and inadequate," says MSF program coordinator Eymeric Laurent-Gascon. "Some of the displaced persons have not received any food since they arrived and are relying on help from those around them. Several NGOs have set up feeding centers with food purchased on local markets, but this has led to significant inflation. If prices continue to rise, the entire population of the city will soon be unable to feed itself without external assistance."

The percentage of children suffering from malnutrition may vary from 5 percent to 50 percent across the different displaced persons' camps, depending on how long ago they arrived and their access to distributions of food and water. The most recent arrivals are generally in the worst shape.

In Mogadishu, MSF is managing four therapeutic feeding centers where the most serious cases are hospitalized. In September, nearly 500 children were treated there. In addition, mothers who come to any of the dozen MSF outpatient treatment centers receive a weekly supply of ready-to-use therapeutic foods, composed of peanut butter enriched with essential nutrients, for their young children. To date, more than 5,000 children have benefited from these products.

Mogadishu's population is currently estimated at more than 1 million; it's estiamted that half of that number are displaced persons. Medical needs far exceed available health services and more people continue arriving daily. The displaced populations are living in precarious health conditions, their immune systems already weakened by poor nutrition. Many have never been vaccinated. Infectious diseases – including cholera, pneumonia, dengue fever and malaria – are common in the city and the rainy season, which will be begin in October, could increase their spread.

Though a massive truck bomb killed dozens of people in the capital on October 4, the situation there, relative to times past, has been fairly stable of late. "That could change, so it's ever more urgent to provide as much as assistance as possible in the near term," says MSF head of mission Thierry Goffeau. "New humanitarian actors have arrived. It is now critical that everyone work together to identify and meet the population's needs, while remaining very watchful. The deadly attack reminded us that periods of calm are often temporary in Mogadishu."