As the number of malnourished children continues to rise, it is clear that more assistance is necessary for the already vulnerable Somali population. 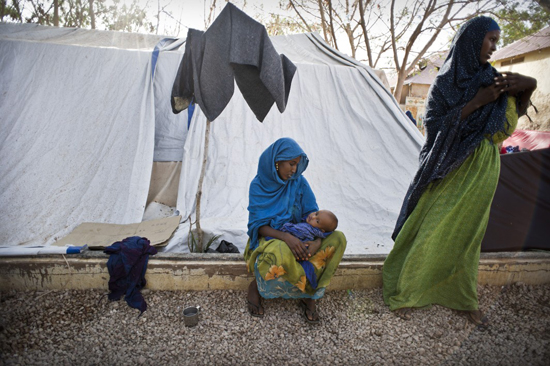 A 20-year old mother whose husband was shot and killed last year sits with her malnourished eight-month old child outside an MSF feeding center in Galcayo, Somalia.

For the past few weeks Doctors Without Borders/Médecins Sans Frontières (MSF) teams in Somalia have been trying to expand their operations despite ongoing violence in the capital and other restrictions. As the number of malnourished children continues to rise, it is clear that more assistance is necessary for the already vulnerable Somali population, which has had virtually no access to healthcare for the past two decades.

To date, a total of 8,135 children are enrolled in MSF nutritional programs in Somalia; 561 of them are severely malnourished and require hospitalization and intensive care. MSF is aiming to further reduce mortality among malnourished children by reaching out to communities to identify patients in need of assistance, to stabilize them, and to provide therapeutic food to those who need it. Those who require around-the-clock intensive care will be referred to Inpatient Therapeutic Feeding Centers (ITFC).

In the capital, Mogadishu, the organization has opened a 60-bed ITFC in which 50 severely malnourished children are currently hospitalized. Simultaneously, mobile teams have been reaching out to neglected populations currently taking shelter in displacement camps in and around the city.

Since August 8, medical teams have vaccinated more than 11,000 children against measles to reduce the risk of epidemic. MSF is also closely monitoring the evolution of a cholera outbreak in the city and in the camps and has just opened a 50-bed Cholera Treatment Center in central Mogadishu.

In southern and central Somalia, MSF had, as of August 18, hospitalized 319 severely malnourished children in intensive treatment centers in Marere, Dinsor, Beletweyne, Afgoye, Jowhar, and Guriel. Mobile teams have reached out to displaced populations and provided nutritional support around Marere and Guriel as well.

In Northern Somalia, as of August 18, 192 children had been admitted to MSF Therapeutic Centers in north and south of Galcayo.

Despite these efforts, the organization is still far from having a good picture of the overall nutritional situation in this part of the country and MSF teams are still negotiating to gain more access. According to Duncan Mclean, program manager for MSF operations in Somalia, “although there are no doubts that the situation is critical, we still have a very patchy view, limited to the areas of our activities.”

MSF, which has been one of the largest healthcare providers in Somalia for the last two decades now runs 13 projects in 8 regions. Despite difficulties, MSF remains one of the only few organizations running medical facilities in some communities in south and central Somalia.