A measles epidemic is spreading. The lack of infrastructure and services is worsening the population’s vulnerability. And civilians have endured new military offensives. 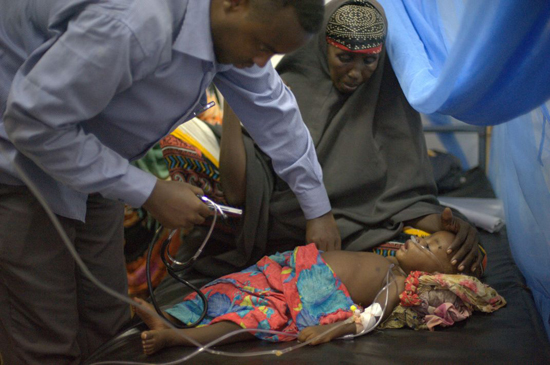 A doctor treats a sick child in one of MSF's four inpatient therapeutic feeding centers (ITFCs) in Mogadishu. Severely malnourished children with additional health complications, such as pneumonia or diarrhea, are treated in the ITFCs.

The conflict that began two decades ago in Somalia continues, and its consequences are currently exacerbated by drought—one of the worst on record in the country. Thousands of people have been forced to flee Somalia, and are seeking humanitarian aid in refugee camps in Kenya and Ethiopia. A measles epidemic is spreading. The lack of infrastructure and services is worsening the population’s vulnerability. In recent weeks, civilians have endured new military offensives launched in southern Somalia and in the capital Mogadishu.

It is in this context that Doctors Without Borders/Médecins Sans Frontières (MSF) has, in less than six months, provided intensive medical care to more than 10,000 severely malnourished children who were brought to medical facilities. MSF has projects in northern Kenya, including in Dadaab; in eastern Ethiopia, in refugee camps in Malkadida, Kobe, Bokolmayo, Hilleweyn, Dolo Ado; and across much of south-central Somalia itself, in Marere, Beletwayne, Dinsor, Daynile, Mogadishu, Jowhar, Guriel, and Galcayo. MSF has also enrolled a total of 54,000 severely malnourished children in outpatient feeding programs in more than 30 locations in these three countries.

At the same time, MSF teams have been battling the deadly combination of measles and acute malnutrition, which affects children in particular. A large proportion of the population has not been vaccinated against measles or any other diseases because years of instability and the lack of an effective government or a functional state have caused the healthcare system to collapse. Measles, if untreated, can be highly fatal for children.

"Combined with malnutrition, measles is now the main killer of children in Somalia,” said Duncan McLean, head of MSF programs in Somalia. “Only vaccination can stop the spread of the epidemic.”

MSF teams have vaccinated more than 150,000 people in and around Somalia for measles, and have treated more than 5,000 patients for the disease this year. Much more needs to be done, however. The vaccination effort needs to be scaled up in Mogadishu, where waves of people continue to arrive, seeking assistance. In certain parts of the country, access has been greatly limited by the presence of armed groups. Medical teams have not been able to reach the population there, not even to assess their situation, and mass measles vaccination campaigns have been blocked. After heavy fighting erupted on October 20 in Daynile, on the outskirts of Mogadishu, MSF was forced to suspend its measles vaccination campaign in the area.

The arrival of the rainy season may further worsen conditions for children and adults living in makeshift camps in Mogadishu and elsewhere. In the capital, the proportion of children suffering from waterborne diseases—including diarrhea, which also contributes to malnutrition—is now on the rise. MSF is preparing to deal with possible cholera outbreaks; the effects of such an outbreak on hundreds of thousands of already malnourished people living in crowded conditions could be devastating.

All of this is occurring against a backdrop of insecurity and fighting, and the Somali people continue to pay the price. On October 30, MSF treated 52 wounded people—including 31 children—in the southern town of Jilib, after an attack caused civilian casualties among the displaced. Ten days earlier, MSF teams in Daynille, on the outskirts of Mogadishu, treated 83 patients for gunshot and blast wounds, and were forced to suspend a measles vaccination campaign in progress. Thousands of people displaced by conflict and drought continue to arrive in Mogadishu.

For years, Somalis have crossed the border to seek refuge in neighboring Kenya—with a historical peak in June 2011 when more than 40,000 people were settling in Dagahaley, Ifo, and Hagadera, the three main camps in Dadaab, every month. Present in Dagahaley camp since 2009, MSF is offering a comprehensive package of health care to the population there. In Ifo camp, activities had to come to a halt after the kidnapping of two of MSF's staff on October 13th. In Dagahaley, the insecurity forced MSF to temporarily reduce its activities. Teams are currently scaling up activities again.

The fighting in southern Somalia and along the Kenyan border, and heavy rainstorms and floods, have slowed to a trickle the number of people presenting themselves to authorities in Dadaab. Meanwhile, the numbers of people fleeing into Ethiopia is increasing.

Refugee camps in Ethiopia are currently home to roughly 130,000 refugees from Somalia, the majority of whom have fled an ongoing food crisis and conflict. In recent weeks the number of people crossing the border into Ethiopia has increased to approximately 300 per day, up from 90 per day in September and October.

During these last six months, MSF’s emergency efforts have proved difficult to translate into concrete actions for the Somali people because of the lack of security in the country and at the borders, and also due to ongoing restrictions imposed on MSF's operations in certain parts of Somalia. Despite this, MSF was still able to scale up its activities and open new projects, in addition to the nine medical facilities that had already been running in south-central Somalia, making it the main provider of free healthcare in the region.