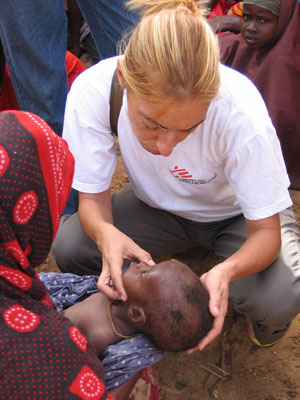 On April 17, 2007 MSF launched an emergency medical response in Afgooye, Lower Shabelle Region, about 30 kilometers west of Mogadishu. Due to insecurity in the area, MSF decided to dispatch a team of senior MSF Somali staff from Nairobi and the Dinsor Health Center to evaluate the needs of thousands of displaced people who poured into the town following major fighting in Mogadishu. Two months after the emergency assistance program started, and following a recent project visit by MSF's Nairobi-based medical coordinator, Dr. Monica Rull, we look back at recent achievements and future perspectives for MSF in that part of the war-torn country.

Responding to a major emergency

"When the team first arrived, they supplied medicines to existing health structures and distributed items such as plastic sheeting and mosquito nets, to more than 3,500 families. Provision of clean water to the displaced population was also a priority and they put in place a water trucking system to cater to the massive needs of a population left with very little," Rull said following her first visit to the project from Nairobi where the MSF coordination team for Somalia is based. "At the time, we had quite a few cases of watery diarrhea. In fact, throughout April and May, we treated close to 150 suspected cases of cholera by setting up an isolated treatment center. We dispatched some senior Somali staff from our project in Dinsor's hospital, in neighboring Bay region, to contain the outbreak and assist the local medical team. While the majority of patients treated recovered, four patients died as a result of the outbreak. By the sixth week of intervention, the program came to an end." 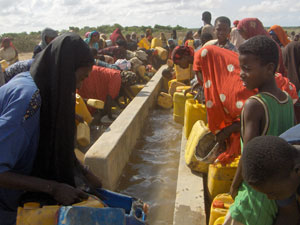 MSF is currently repairing the inpatient department of Afgooye hospital to increase capacity from 10 to 30 beds. About 150 to 160 patients are seen every day at consultation. The target population in Afgooye approaches 60,000 persons, including displaced people and residents.

"Our activities also include the provision of free primary health care to the target population through the set up of an outpatient department and we also support case management of patients admitted to the inpatient department. We have now reinforced our team by recruiting two new medical doctors from Mogadishu and we also brought an experienced clinical officer from our project in Dinsor," added Rull. "We would all prefer to have an international team physically present in Afgooye, but for the moment it is not possible due to the insecurity. The situation in the town is not stable enough. In the meantime, we will continue to do regular visits from Dinsor and Nairobi to support the team until we can have a permanent and complete team of international volunteers in Afgooye." In most MSF projects in Somalia, international volunteers work hand-in-hand with Somali staff thanks to the recognized proximity of MSF to all local Somali stakeholders in a spirit of neutrality and impartiality. 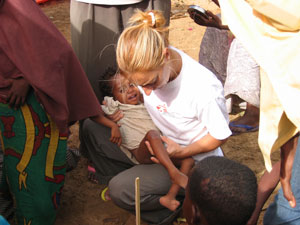 The MSF intervention in Afgooye hospital also includes technical support for the sterilization process (using the MSF standard protocols) as well as support of the inpatient department's structural organization. "We must improve basic practices that, in the end, make a real difference for the patients. The mortality rate remains too high at the moment, mostly related to surgical complications and the lack of an adequate setup. In the hospital, patients suffering from wounds and trauma represent close to 44 percent of all cases. There are also a lot of women suffering from obstetrical complications, so we have decided to dispatch our international midwife based in Dinsor to the area. Her objective will be to further investigate the general condition of female patients arriving at the hospital and to set up the proper response within the hospital," said Rull. 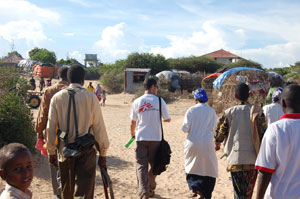 MSF aid workers walk through an area of Afgooye where families displaced by violence have been living in temporary shelters. Photo © MSF

Caring for those who have nowhere to go

Some of the displaced people who fled to Afgooye have now returned to Mogadishu, but many are unable to return as they have no resources and the buildings that they were living in have either been destroyed or taken over.

"However, a considerable percentage of the IDPs were already former IDPs in Mogadishu, who were living in governmental structures and are not allowed to go back to those. This can explain why the number of IDPs going back to Mogadishu is quite modest (according to United Nations Refugee Agency, only 20 percent of the IDPs who came to Afgooye have moved back to Mogadishu). Should the marketplace activity in Mogadishu return to normal and the situation stabilize, we could see a number of them commute every day between Afgooye and Mogadishu and resume "normal" business activities. But there is a potentially large-scale human disaster looming if this unstable situation lasts. People need to feel they can rebuild a life for themselves and their families after this recent displacement. In the meantime, our job will be to ensure a rapid medical response and to cover the basic health needs of the people, displaced and residents alike," concluded Rull.