Somalia: MSF Hospital Caught in Center of Fighting in Mogadishu

Shells from the fighting in Daynile, a neighborhood located in an outlying area of Mogadishu, struck Daynile hospital’s emergency room and a portion of the surgical ward, causing significant damage. 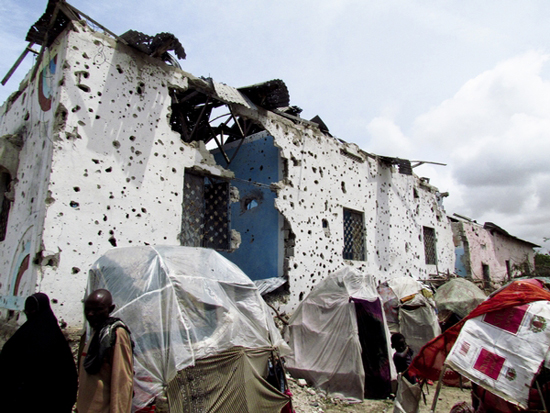 A building in a refugee camp in downtown Mogadishu, not far from the MSF hospital at Daynile, bears the scars of the conflict.

Fighting began in the morning in Daynile, a neighborhood located in an outlying area of Mogadishu. The shelling struck the hospital’s emergency room and a portion of the surgical ward, causing significant damage. MSF has worked in the hospital since 2006.

There were no casualties among the hospital’s 19 patients or staff, comprising 36 medical personnel and 12 guards. All patients and staff sought shelter from the shelling in the internal medicine department.

MSF calls on parties to the conflict in Somalia to respect the neutrality of Daynile Hospital, along with that of all medical facilities in the country, and to respect the safety of patients and hospital staff.

MSF has maintained a continuous presence in Somalia since 1991. As part of its 13 countrywide projects, the organization provides medical services relating to the present emergency, conducts immunization campaigns, and implements feeding programs. MSF also provides aid to Somali refugees in camps in Dadaab, Kenya and Dolo Ado, Ethiopia.

MSF staff members Blanca Thiebaut and Montserrat Serra were abducted in Dadaab, Kenya on October 13, 2011 while providing humanitarian assistance to Somali refugees. MSF calls on all Somalis—community leaders, authorities in control of areas in Somalia where MSF’s kidnapped colleagues are detained, and those in the Somali diaspora—to do everything possible to facilitate their safe release.