Dr. Faiza Adan Abdirahman, the medical doctor in charge of the pediatric department at Istarlin hospital in Galgaduud, discusses the situation in the area. 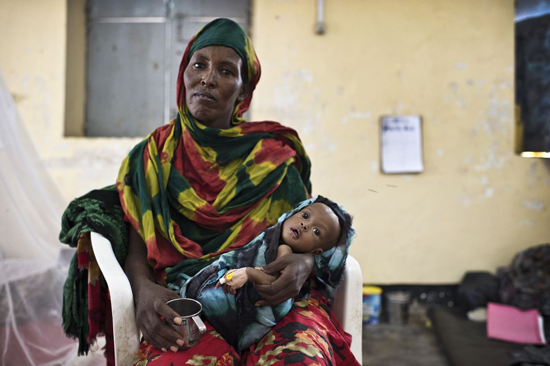 A mother with her child at an MSF therapeutic feeding center in Galcayo, where the situation is similar to Galgaduud.

Malnutrition rates are very high in large parts of south and central Somalia, but the ongoing conflict makes it difficult for international organizations like Doctors Without Broders/Médecins Sans Frontières (MSF) to operate at full capacity. Where we can work, our doctors face immense pressure due to the large numbers of people who need emergency assistance.

Dr. Faiza Adan Abdirahman is the medical doctor in charge of the pediatric department at Istarlin hospital in Galgaduud, where MSF has been working since January 2006. She spoke by phone on August 30:

I’m in charge of the pediatric department, where I deal with newborns and children up to the age of 14. Our main focus at the moment is the large number of malnourished children coming to us.

The children we’re treating are severely sick. [Today] it’s only 3pm and we’ve already admitted 70 children. These are children who are so ill that they can’t even take medicine on their own. In our outpatient department, we are receiving a lot of patients.

Before the droughts, less than 20 percent of our patients were malnourished, but now the number is closer to 50 percent. With malnourishment, come all manner of other diseases. Many of these children are suffering from watery diarrhea and pneumonia. We’re also seeing other problems and complications such as measles and renal and heart problems.

For children whose condition is critical and a second medical opinion is necessary, we use telemedicine technology to connect with a pediatric specialist based in Nairobi. We have been holding real-time medical consultations between Guri El and Nairobi since last December. So far the results have been positive.

A lot of the children we’re treating are very young, of breastfeeding age. Breast milk contains vital antibodies that babies need to fight off infection, and without it, they’re left defenceless. But we’re in a situation where mothers themselves have nothing to eat and, as a result, are not producing milk. This means children aren’t being breastfed and are left vulnerable. We’re seeing the results of this on a daily basis.

Let me tell you about one patient we’re currently treating: Seven-year-old Bishaaro was brought to us in a very bad state. She was weak and had ulcers all across her body, which were all infected. She also had liver problems, was severely anemic and, after we ran some tests, we found she also had kala azar, which is a tropical disease transmitted by sandflies that is deadly if left untreated.

We started treating her immediately, giving her medicine and a blood transfusion. But then she started bleeding from her nose and her mouth. She lost so much blood that we had to give her a second blood transfusion. Bishaaro is getting better now and her bleeding stopped. We all have high hopes that she’ll recover fully and go home soon.

We’re facing a lot of challenges here at the moment, so many, in fact, that we’d probably be here all day if I listed them all. We have parents who are opting for traditional medicine when their children fall ill, with traditional doctors burning and cutting the children’s skin in an attempt to heal them. These wounds get infected and, as these children’s defences haven’t fully developed, they either die or come to us in terrible shape with all sorts of infections.

We have parents taking away their children before they complete their treatment, and then returning them to us when their condition has deteriorated even further.

Most of all, space is the biggest issue. We’re currently treating the largest number of patients at the hospital since I’ve been working here, and space is at a premium. We are over capacity and are constantly working out ways of keeping malnourished patients apart from those suffering from TB or measles. Putting them together is simply not an option.

Despite all these major challenges, lives are being saved and we are able to assist these children, many of whom would have died.

Since January 2006, MSF has been working in Guri El’s 80-bed Istarlin hospital which provides outpatient services for adults and children and inpatient services including a pediatric ward, a female ward, an operating theater and surgical ward. Also in Galgaduud, MSF runs one health post in Dhusa Mareb, the other in Hindere.