Somalia: Vaccination Campaign Suspended Due to Fighting In Daynile 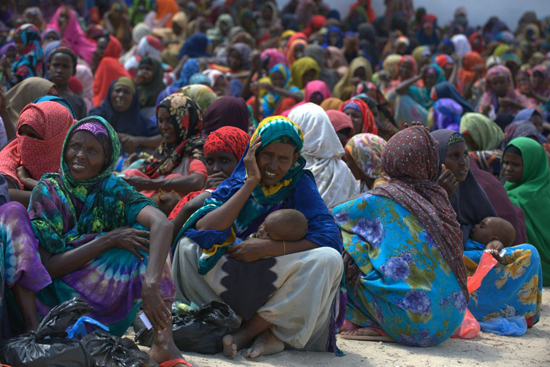 In Mogadishu, about half of the more than one million inhabitants are displaced persons. MSF is increasing its presence to try to meet the needs. See this and other videos clips from our monthly video report.

In Mogadishu, about half of the more than one million inhabitants are displaced persons. MSF is increasing its presence to try to meet the needs. See this and other videos clips from our monthly video report:

After heavy fighting erupted on October 20 in Daynile, on the outskirts of Mogadishu, Doctors Without Borders/Médecins Sans Frontières (MSF) was forced to suspend its measles vaccination campaign in the area. The campaign had been scheduled to last three weeks and to reach 35,000 children. Measles is currently wreaking havoc in Somalia, and MSF has vaccinated more than 60,000 people for measles over the past two months.

"Combined with malnutrition, measles is now the main killer of children in Somalia,” says Duncan McLean, head of MSF programs in Somalia. “Only vaccination can stop the spread of the epidemic.”

During the first five days of the campaign in Daynile, 4,831 children, ages six months to 15 years were vaccinated in different parts of the area. But clashes between the forces of the Transitional Federal Government, supported by AMISOM (the African Union Mission in Somalia), and the Al Shabaab, put a stop to the vaccinations.

"As long as the security situation is not stabilized, it will not be possible to resume the vaccination campaign,” observes McLean. “And when this happens, we will have to completely rethink our strategy because many people have fled the combat zones. Tens of thousands of displaced people were living in camps in Daynile, many for a long time and some who had arrived recently from drought-affected regions.”

In addition, many people were wounded during the clashes. On October 20 and the day after, MSF teams at Daynile Hospital received 83 patients who had been injured by gunshots or explosions. Forty one were hospitalized and eleven surgical procedures were performed.

MSF has supported management of emergencies for the hospital in Daynile since August 2007. Starting this past April, MSF has also supported the treatment of severe malnutrition. Twenty four malnourished children were receiving intensive treatment before the fighting erupted. In most cases, frightened mothers chose to leave with their children; only six currently remain under care.

MSF continues to work in the Daynile hospital and in Mogadishu, where our teams provide medical and nutritional assistance to displaced populations.


MSF has been working in Somalia continuously since 1991 and currently operates 13 projects in the country, including medical activities related to the current emergency, vaccination, and nutritional interventions. MSF also resumed operations among Somali refugees in Dadaab, Kenya, in 2009 and also assists refugees in the camps of Dolo Ado, Ethiopia.