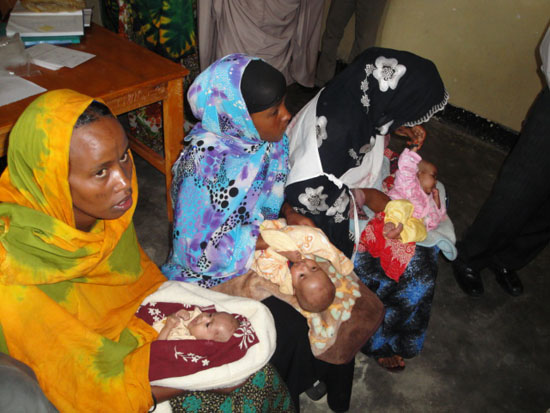 Left, Fardows Abu-Bakr visits the MSF clinic in Hargeisa, Somaliland, with her triplets.

“Having a baby is a joy. Having three is a triple blessing,” says Fardows Abu-Bakr, 34, who recently gave birth to healthy triplets in Hargeisa, Somaliland. She gazes at Sudais, Su’ad and Sadiyo with love, pride and apprehension.

Two and a half years ago, Fardows lost two children, was abandoned by her husband, and fled her small village in Ethiopia when drought killed all her family’s cattle, their only source of income. She ended up in a displaced persons’ camp in an area of Hargeisa called Shadaha, with her only remaining child and a will to keep surviving.

Fardows regrets her decision to leave Ethiopia. “Life in Shadaha is worse than where I came from," she says. "Back home we had relatives and friends. Here we have nothing. Some people resort to begging on the streets when they come here.”

After settling into the camp, Fardows found work washing and cleaning for families, which allowed her to provide for herself and her son. One day, she ran into her estranged husband on the street. They got back together again and things fell into place, for a while.

When Fardows got pregnant she felt that something was unusual about her pregnancy. As it progressed she became too heavy to do anything. Despairing, she sat at home, waiting for the worst. “I could not afford to go to the hospital, as I knew the fees were expensive," she says.

A woman had recently died on her lap while giving birth. “I thought my time had come too,” she recalls. “I said good-bye to everyone who visited me and asked them for forgiveness. I never thought that I would survive.”

A Doctors Without Borders/Médecins Sans Frontières (MSF) outreach team found Fardows while surveying the Shadaha camp for people in need of emergency medical attention. They took her to hospital, where she learned she was pregnant with triplets. “I was astonished and frightened," she says. "I had never heard of women giving birth to three children. How could this happen?”

MSF organized and paid for Fardows’s delivery at Hargeisa’s general hospital, where she gave birth by Caesarean section. She was relieved and excited when she delivered three healthy babies.

“Children are a blessing and my community in Ethiopia values them a lot," she says. "There, I know husbands who have left their wives because they could not give birth to enough children as fast as they would like.”

Despite her joy, Fardows is faced with the harsh reality of life in a displaced persons’ camp with three newborn babies to care for. “I am always worried about how I will feed them. I can’t even afford soap for them, I can’t even afford clothes, as their father is not working and we are depending on handouts. I can’t work anymore with four children to care for.”

Today, she brought her triplets to the MSF clinic for the third time since their birth. “Sudais is vomiting, Su’ad has a fever, and Sadiyo is not breastfeeding well. But here at least, they can get the necessary medical care they need.” She half-smiles as she expresses her hopes for the future. “I am happy that we are now a big family again, I just want to see my children grow and mature; I don’t want to lose them.”

In 2009, MSF started providing free basic health care and nutritional care to vulnerable people in Somaliland, focusing on children under five at three clinics in Hargeisa—in the neighborhoods of Lug Iyo Lacaag, Shadaha and State House. MSF also provides antenatal and postnatal care for pregnant women, and refers patients in need of lifesaving emergency treatment to a local hospital.